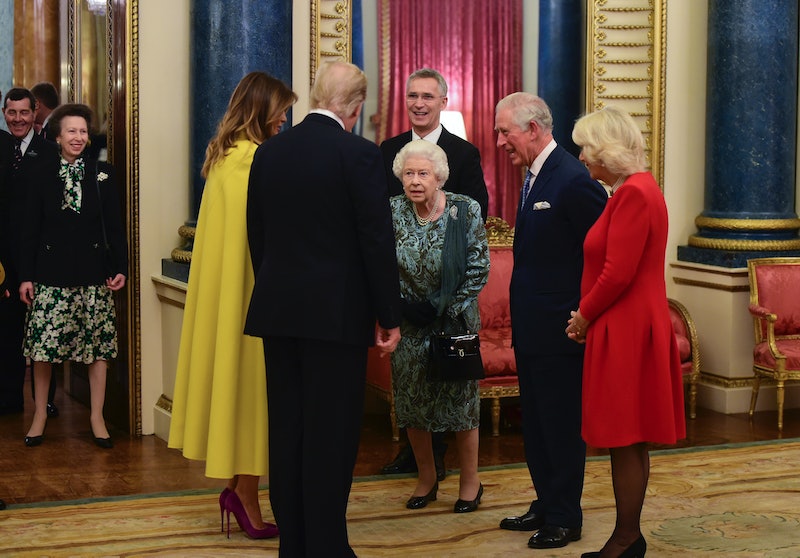 On Tuesday, the royal family hosted world leaders at Buckingham Palace to celebrate 70 years of NATO cooperation. The guest list included UK Prime Minister Boris Johnson, French President Emmanuel Macron, and Canadian Prime Minister Justin Trudeau to name a few. There was a long list of royals there too including the Queen, Prince Charles, and the Duke and Duchess of Cambridge. But it's a clip of one royal in particular — Princess Anne appearing to shrug at President Trump — that taken Twitter by storm. The Queen's daughter is known for sharing her views and people are speculating that she refused to greet President Trump upon his arrival.

President Trump and First Lady Melania arrived 40 minutes late to the event at Buckingham Palace, according to The Guardian. Upon their arrival they were greeted by the Duke and Duchess of Cornwall and the Queen. After shaking hands, the Queen appears to indicate for Princess Anne to come to the royal line, as she’s stood in a doorway nearby. The Princess raises her hands and shrugs, while appearing to say, “It's just me”, before gesturing behind her and saying, “and this lot.”

On Wednesday, speculation started to fly that this was Princess Anne refusing to greet the president of the United States. One person who voiced their opinion on Twitter wrote, “I'm here for Princess Anne's guerilla campaign to restore the reputation of the royal family.” Another said, “People are surprised that Princess Anne can hang? That woman once was the victim of an attempted kidnapping and when she was told to get out of her car at gunpoint she said, "Not bloody likely." A true bad b*tch.” Once the clip had hit the internet the responses came rolling in.

While a lot of people have taken the opportunity to anoint Princess Anne as a "savage queen," the video may not be all it seems. Valentine Low, a journalist for The Times who’s written a large amount about the royals, took to Twitter to set the record straight.

In one tweet he wrote, “OK, here goes... Princess Anne: the truth. No, she didn't snub the Trumps. And she wasn't told off by the Queen.” He then proceeded to explain, “instead the Queen, after greeting the Donald (and the Melania), turned to Anne to see who was next. But there wasn't anyone waiting: Trump was the last leader to be received by the Queen. Anne raised her hands in the air, laughed and said: 'It's just me,' adding a moment later 'and this lot' as she pointed to the members of the household behind her.” Valentine said he got this information from impartial witness Laura Elston, a reporter for the Press Association.

More like this
Watch Jacinda Arden’s Devastatingly Honest Resignation Speech
By Sam Ramsden
What The UK Blocking Scotland’s Gender Recognition Bill Means
By Sam Ramsden
This Wordle Rival Is Taking Social Media By Storm
By Sam Ramsden
Twitter Has *A Lot* To Say About The "Single Penalty”
By Sam Ramsden
Get The Very Best Of Bustle/UK
Sign up for Bustle UK's twice-weekly newsletter, featuring the latest must-watch TV, moving personal stories, and expert advice on the hottest viral buys.