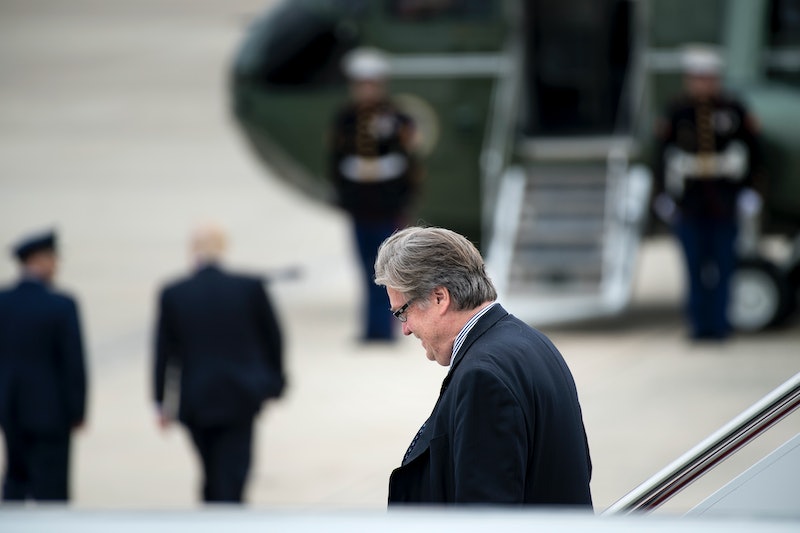 On Friday, after days of pressure on Trump to distance himself from discrimination, The New York Times reported that the president had decided to remove his chief strategist, Steve Bannon. The news was confirmed minutes later in a short statement from the White House that implied that John Kelly had played a hand in Bannon's exit. While administration officials noted that Bannon's removal had been Trump and Kelly's decision, Bannon's camp fired back with claims that Bannon had, in fact, quit last week. The announcement was postponed, they noted, due to Charlottesville. So: Did Bannon resign from the administration? Or was he pushed?

The simple answer is that when you're faced with dueling narratives, and on a question that's basically opaque to the general public, it's impossible to say with 100 percent certainty. Bannon and his supporters clearly want it known, however, that he wasn't caught off guard by an abrupt firing, but rather made a conscious decision weeks before now to depart from the administration. A source close to Bannon reportedly confirmed this to ABC News, saying his actual effective date of resignation was Aug. 14, four days ago.

There have been reports of tensions between Bannon and other members of the president's staff for months. Back in April, National Security Adviser H.R. McMaster kicked the former Breitbart chief off the national security council, stripping him of one of his hugely controversial roles. Also, in the aftermath of Bannon's exit being announced, The Washington Post's Robert Costa reported that Trump son-in-law, Jared Kushner, and his allies were "irritated" by Bannon's reputation.

Whatever the precise nature of Bannon's dismissal, whether a preemptive resignation or an outright firing, his eight-month tenure in the White House narrowly outpaced some of the establishment-backed figures he was sometimes reported to feud with. In particular, longtime Republican Party operatives Reince Priebus and Sean Spicer, who served as chief of staff and press secretary, respectively, until their careers were cut short by the arrival of Anthony Scaramucci as incoming communications director.

Scaramucci, of course, lasted just 10 days in that announced roll before getting the boot himself, although not before delivering those infamous, foul-mouthed comments about Bannon to Ryan Lizza of The New Yorker. In short, Bannon is (as of this writing) the longest-tenured member of the Trump administration to lose their job, and according to journalist Gabriel Sherman, he might be heading back to his old one at Breitbart.