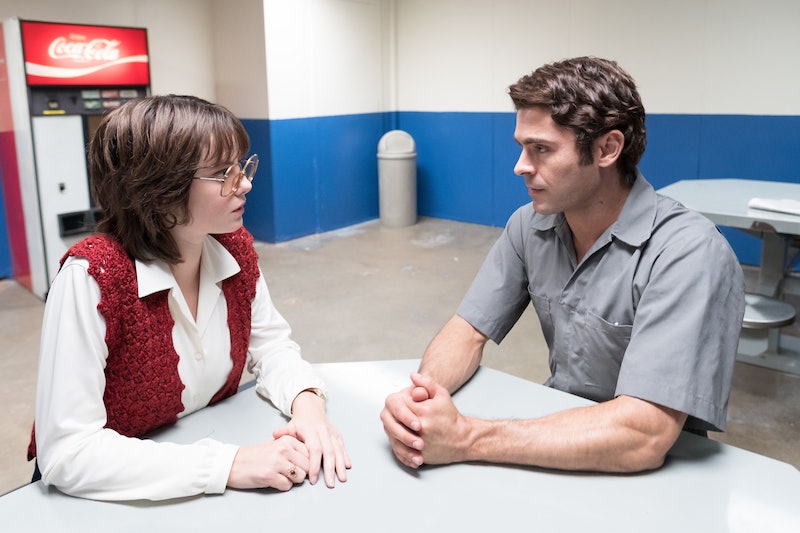 Zac Efron's Ted Bundy movie is finally here and streamable. Extremely Wicked, Shockingly Evil and Vile debuted on Netflix on Friday, May 3, focusing more on Bundy's domesticated facade and his dealings with the law than the violence the convicted serial killer inflicted. Some moments are so shocking, you'll find it hard to believe that they really happen. But much of the movie is accurate, including the time Ted Bundy proposed in court.

In the film, Bundy asks Carole Ann Boone (played by Kaya Scodelario) to marry him while he is questioning her in court. (He represented himself.) And, because of a strange Florida law, the fact that she said yes and they both made this declaration in court in front of a judge meant that they were legally married.

And, yes, this really did happen. During Bundy's second murder trial in Orlando, Florida in 1980, Boone was serving as a character witness for him. The couple had met years earlier while working at the Olympia, Washington Department of Emergency Services, as noted by Cosmopolitan, but did not get together right away. As reported by Refinery 29, the book The Stranger Beside Me by Ann Rule, a woman who had known Bundy, explains that in Florida at the time, a "public declaration, properly phrased, in an open courtroom in the presence of court officers would make the [marriage] ceremony legal." According to A&E, Boone had also arranged to have a notary public in attendance.

The clip above from True Hollywood Story shows Bundy and Boone's court proposal/marriage at the 1:55 mark. In the clip, Bundy says, "Carol, do you want to marry me?" She responds, "Yes." He then says, "And I want to marry you?" Again, she says, "Yes." Then he adds, "And I do want to marry you." Boone can be heard giggling in the background. According to Refinery 29, later in the day Bundy had to "propose" again, because the first time it was not "properly phrased," as Rule put it.

At this point, Bundy had already been convicted of two murders in his first murder trial, per The New York Times, and the trial in which he and Boone were married ended in another conviction. Bundy was sentenced to death. Boone believed in Bundy's innocence for quite some time and they stayed together for years after his conviction. They even welcomed a daughter she claimed he fathered while on death row. But, in 1986 they divorced, three years before his 1989 death. Boone and her daughter moved away from Florida and went on to live their lives in private, as reported by Refinery 29.

While there's clearly a lot to unpack with Bundy and Boone, Extremely Wicked, Shockingly Evil and Vile does not focus on their relationship. The movie tells the story of the serial killer through the lens of his girlfriend, Elizabeth Kloepfer (Lily Collins), and is based on her memoir, The Phantom Prince: My Life with Ted Bundy. Kloepfer and Bundy first met in 1969 and their relationship continued for years, even while she grew suspicious of his behavior and reported him to the police, according to Biography. Like Boone, Kloepfer has lived privately for decades following the release of her book in 1981.

More like this
12 Documentaries & Films About Cults From Netflix UK To Hook You From Start To Finish
By Kay Leong
Sadly, You Can’t Stream 'Elvis' — Yet
By Morgan Leigh Davies
Photos Of The 'Elvis' Cast vs. Their IRL Counterparts Will Have You All Shook Up
By Grace Wehniainen
Chris Hemsworth Joked That Baring His Butt In ‘Thor: Love And Thunder’ Was A “Dream”
By Brad Witter
Get Even More From Bustle — Sign Up For The Newsletter