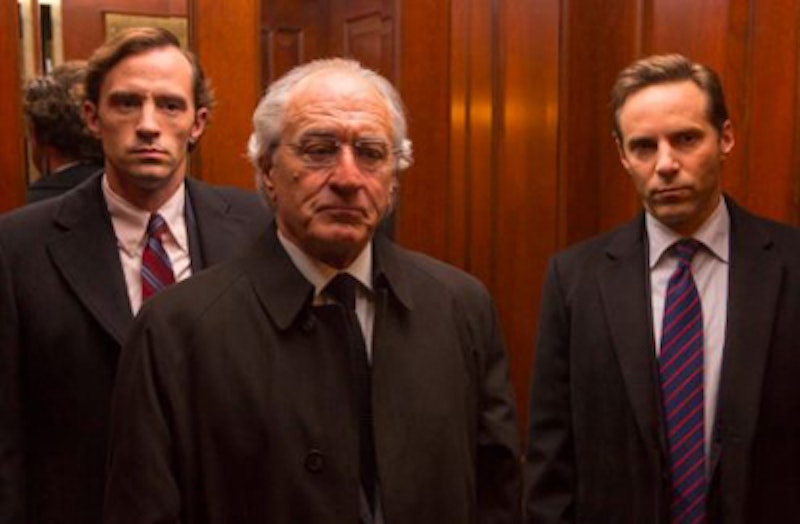 Nearly 10 years after the events occurred, the Bernie Madoff saga is back in the spotlight. A new movie about the scandal and its effect on the Madoff family, called The Wizard of Lies, is coming to HBO on May 20, and it will no doubt reignite debate on a number of questions surrounding the case. Like, for instance, did the Madoff sons know about Bernie's crimes?

Bernie and Ruth Madoff had two sons: Mark and Andrew Madoff. Sadly, both have now passed away. Mark died first, committing suicide by hanging in 2010 on the two-year anniversary of his father's arrest. Andrew then passed away in 2014, having succumbed to lymphoma. But while they were still alive, the pair played an important role in seeing their father brought to justice — while also facing constant questions and scrutiny related to any potential role they might have played in Bernie's Ponzi scheme that saw him swindle investors out of $50 billion — the largest such heist in American history. (Neither son was ever charged in connection to the scandal.)

At the time of the initial investigation into Bernie — and this is depicted in the film — Andrew and Mark were both treated with a great amount of suspicion. After all, the two men were both financial experts who worked in high levels at their father's company, so many believed they could not have held the positions they did without knowing what was really going on. However, the two had a pretty good defense against any wrongdoing: They were the ones who turned their father in.

As the financial market declined in late 2008, Bernie's Ponzi scheme went down with it. Clients were withdrawing their funds, and the once-untouchable criminal ended up with no money to pay his investors. On Dec. 10, he instructed his sons to pay out $170 million in bonuses to employees, which allegedly confused Andrew and Mark, who reportedly asked him how they could pay employees if they couldn't pay investors. It was then that Bernie allegedly confessed to his sons that he was running a Ponzi scheme, and the pair then turned him in to the authorities.

Following their father's arrest, Andrew and Mark cut off contact with both of their parents. They had their assets frozen in 2009, and remained under investigation for the next few years, but were never convicted of any wrongdoing. At the time of Mark's death, he hadn't seen his parents in two years. Andrew eventually made up with his mother, who also claimed no knowledge of Bernie's crimes, but as of at least 2012, he continued to refuse to speak to his father.

The evidence suggests that Andrew and Mark were just as surprised as everyone else that their father was running a Ponzi scheme, and their relationships with their parents were totally tarnished as a result.

More like this
UK Viewers Will Have To Wait To See Jessica Biel’s Killer Housewife Series
By Rachel Mantock
Where Is Dr. Cline Now?
By Morgan Leigh Davies
Amanda Seyfried Reflects On 'Mean Girls' & "Gross" Remarks That Men Made After It
By Jake Viswanath
'Dirty Dancing's Jennifer Grey On The Tearful Moment That Changed Her Relationship With Patrick Swayze
By Sam Ramsden
Get Even More From Bustle — Sign Up For The Newsletter