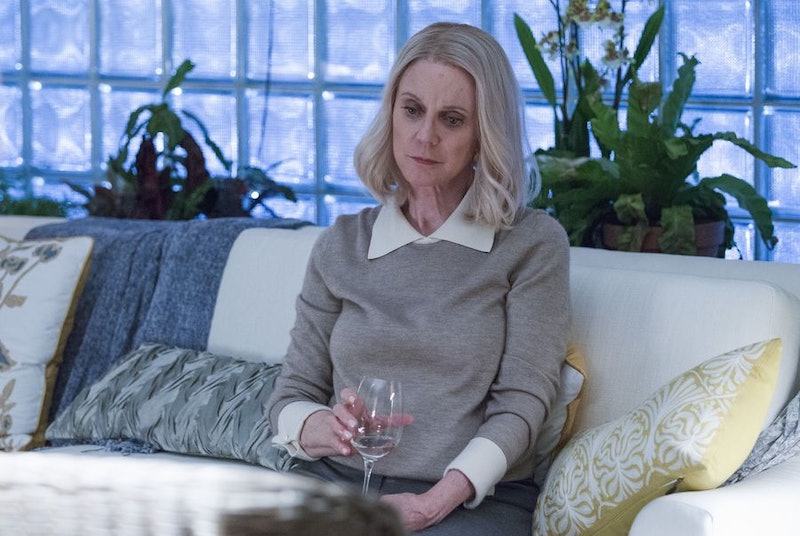 In 1959, Ruth Alpern married her high school sweetheart, Bernard Madoff. She had no way of knowing that 49 years later, her husband would be arrested for his role in a massive Ponzi scheme … or that eight years after that, she would be played by acclaimed actress Blythe Danner in an ABC miniseries based on her husband's actions. But while you may know what happened to Madoff himself — in 2009, he plead guilty to 11 charges of defrauding investors and was sentenced to 150 years in prison — not as many people know what's happened to Ruth Madoff since his arrest. Bustle reached out to her lawyer for comment on Madoff, her husband's crimes, and her life now, but has not yet received a response.

Ruth was never indicted as a part of any of her husband's schemes — but she hasn't exactly had an easy time since her husband's fraud was revealed. Three years after Madoff's arrest, Ruth admitted in an interview with 60 Minutes that she and her husband attempted suicide together shortly after his fraud was exposed:

I don't know whose idea it was, but we decided to kill ourselves, because it was so horrendous what was happening. We had terrible phone calls, hate mail, just beyond anything. And I said "I just can't go on anymore." … We took pills and woke up the next day. It was very impulsive and I am glad we woke up.

Once her husband was convicted, Ruth was forced by the government to give up $80 million in assets, including property, jewelry, and art. She also sold her family's penthouse on the Upper East Side of Manhattan.

After the scandal, she spent several years in Florida, but has now moved into a house owned by her son in Greenwich, CT.

I’ve moved back to the New York area for one reason: to spend time with my family, particularly Andy and my grandchildren, whom I love dearly. This has been a healing period for me ... I lost a son whom I loved dearly. I don’t talk to Bernie anymore, and I find it so hard to reconcile my feelings for the man I was married to for over 50 years. Despite this, I’ve chosen to move forward with my life and focus on my remaining family, particularly my grandchildren.

She now lives in a rented two-bedroom apartment that she furnishes with items from IKEA.

But Ruth's troubles haven't been limited to the financial; she has also been rocked by personal tragedy. In 2010, her elder son Mark committed suicide at the age of 46, on the two-year anniversary of his father's arrest. Four years later, her younger son, Andrew, died of lymphoma at the age of 48.

Despite all this tragedy — and despite the fact that Ruth was never charged with anything — New York Magazine reported that she has found herself a popular target for vilification. People allege she must have known at least something about her husband's fraud. In a statement released after Madoff's sentencing, Ruth contended that she was just as betrayed by him as his victims were:

I am breaking my silence now because my reluctance to speak has been interpreted as indifference or lack of sympathy for the victims of my husband Bernie's crime, which is exactly the opposite of the truth. I am embarrassed and ashamed. Like everyone else, I feel betrayed and confused. The man who committed this horrible fraud is not the man whom I have known for all these years.

ABC News reported that "[Ruth] has repeatedly denied knowing [Bernie] was running a massive criminal operation for decades," and she and her lawyer declined to respond to these allegations when asked for comment.

For her part, Ruth's Madoff portrayer doesn't think she was in on it. "I don’t believe she was [an accomplice]," Danner told Good Morning America in an interview in January 2016. "This woman was duped by a sociopath, you know, that this man who she loved from the time that she met him when she was 16, [she] just completely allowed him to take over her life."

Today, Ruth Madoff is 74 years old, and even eight years later, she still can't escape the shadow of her husband's crimes. Just a few months ago, The New York Daily News reported that she had an encounter with a "Crime Watch Daily" reporter outside her old Greenwich apartment that ended with her saying to the man, "Get away from me!"

ABC's Madoff isn't the first time that Ruth (or a version of her) has been portrayed on the screen, and it won't be the last. Actress Cate Blanchett was open about the fact that she based her Oscar-winning role in Woody Allen's Blue Jasmine on Ruth, and she'll next be played by Michelle Pfeiffer in the HBO movie The Wizard Of Lies, which began filming this past August, starring Robert De Niro as Bernie.

ABC's Madoff, based on the 2009 book The Madoff Chronicles: Inside The Secret World Of Bernie And Ruth by ABC News' Chief Investigative Correspondent Brian Ross, stars Oscar winner Richard Dreyfuss in the title role. It will air over two nights — premiering on Wednesday, Feb. 3 at 8 p.m. ET and wrapping up the following the night.

More like this
Where Is Charlie Evens Now?
By Morgan Leigh Davies
Anthony Templet Wants To “Live Normally” After Killing His Father
By Brad Witter
Here’s What Hunter Moore Is Up To Now
By Arya Roshanian
Meet Charlotte Laws, The Woman Who Helped Take Hunter Moore Down
By Arya Roshanian
Get Even More From Bustle — Sign Up For The Newsletter