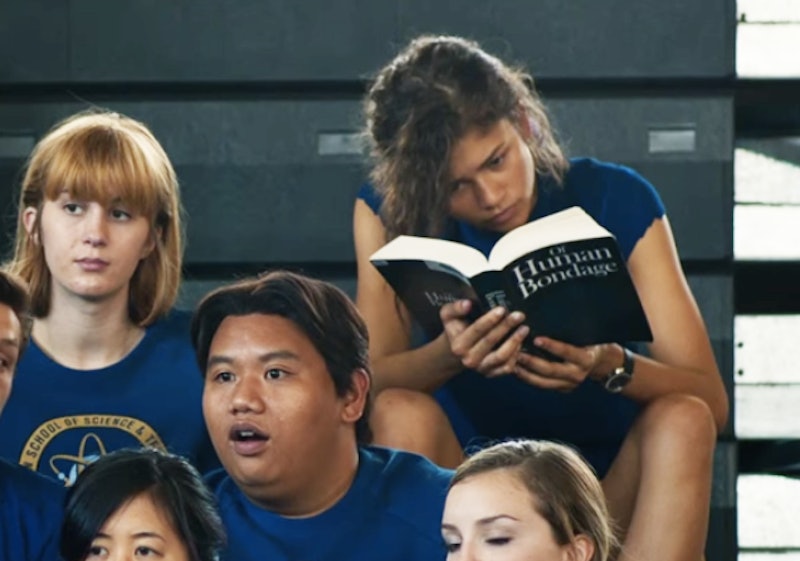 There are, honestly, few people in the world who were more excited to hear the theory that Zendaya was playing Mary Jane in Spider-Man: Homecoming than I was. There are also few people in the world who were more crushed when Zendaya denied that she was Mary Jane, and her character was subsequently referred to as "Michelle." Listen, I've been lighting a prayer candle that this was all a clever redirect since March 2016, and now this major clue that Zendaya might be Mary Jane (or MJ) has reignited that flame. The clue comes from the mouth of our latest Peter Parker, Tom Holland, when speaking to Bustle's own Anna Klassen and reporters during the film's Atlanta set visit, and it's a lot. Let me break it down for you.

"[Zendaya] is so powerful and so strong-willed that it’s not going to shake her at all," says Holland, of how the actress is handling the race controversy that broke out when the rumor that she was playing Mary Jane first started. "...I feel like our generation is moving past this whole [idea] that you can’t cast someone who’s not of the right race for a character, and I really think we’re breaking through and changing that, and Z is perfect for it."

I'm sorry, what? Zendaya is perfect for what? I can't think of why Holland would comment on the idea that casting someone of a different race than the comic book character is something that Zendaya is perfect for unless she was playing Mary Jane. Spider-Man mythos does feature a character named Michele Gonzales that Zendaya could be playing, but (a) Peter doesn't meet Michele until college for various reasons and this is a high school story, and (b) erasing a Latinx character from the film to replace her with a black character opens up a whole controversial can of worms.

But there's more. During the same set visit, co-producer Hauserman Carroll underlined that Spider-Man: Homecoming would be treading new ground in the universe of our friendly neighborhood Spidey, because, according to him, "our goal was not to see what's already been seen." You know what's not already been seen? A black Mary Jane Watson. Especially a black Mary Jane Watson reading books like Human Bondage in gym class and wearing Sylvia Plath t-shirts.

Now, I already found it telling that, when the controversy all started, Guardians of the Galaxy director James Gunn — who also directed Stan Lee's cameo in Spider-Man: Homecoming — responded with a mic drop-worthy statement:

I do not believe a character is the color of his or her skin... if we're going to continue to make movies based on the almost all white heroes and supporting characters from the comics of the last century, we're going to have to get used to them being more reflective of our diverse present world.

But these new comments are suspicious AF in how open-ended they are. You'd think, if Zendaya wasn't Mary Jane, then Mary Jane herself would have appeared in a trailer by now. Or Marvel Men In Black would have stepped in with neuralyzers to wipe everyone's minds once Tom Holland threw this spark out there. Since that didn't happen, I'm calling this one.

More like this
The 50 Most Powerful Characters In The Marvel Universe, Ranked
By Johnny Brayson and Nola Pfau
Lin-Manuel Miranda & Tituss Burgess React To 'Little Mermaid' Casting Backlash
By Radhika Menon
UK Viewers Will Have To Wait For The Terrifying 'Hellraiser' Reboot
By El Hunt
UK Viewers Will Have To Wait To Watch The Handmaid’s Tale S5
By Maxine Harrison
Get Even More From Bustle — Sign Up For The Newsletter