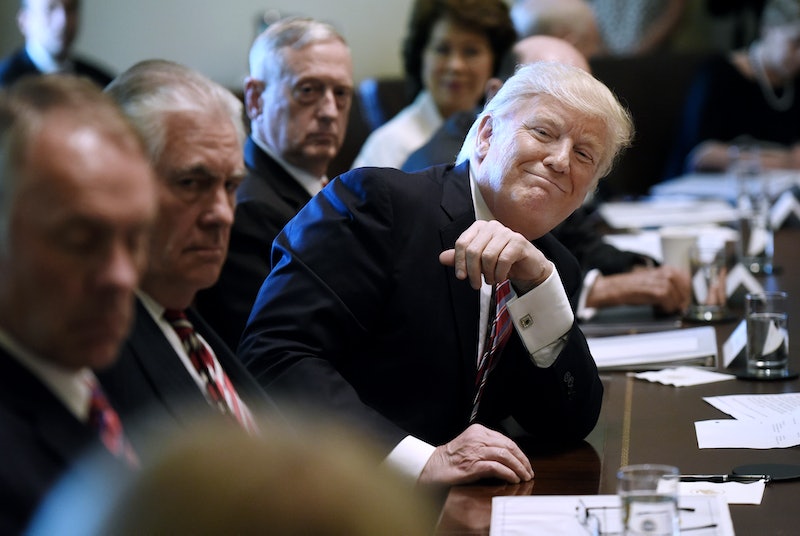 Blocking people on social media can be incredibly gratifying, but not if you're the president of the United States. On Tuesday, the account @VoteVets claimed that Donald Trump blocked it on Twitter, sparking an uproar on the internet and raising more questions about the legality of the president's social media usage.

Trump's block reportedly came after the @VoteVets account blasted the travel ban. VoteVets posted a screenshot taken from its own account that showed it was blocked, and added the caption, "The Commander in Chief can block @VoteVets, the voice of 500k military veterans and families, but we will NOT be silenced." Over 26,000 people have retweeted the post and many veterans have written back to commend VoteVets for their criticism of Trump. "So proud to be affiliated with @votevets. Vets will not be silenced. #Resist," one user commented.

VoteVets is a progressive political organization that claims to represent over 500,000 American veterans in advocating for causes they care about. The organization hasn't made an effort to keep its position on Trump a secret — the account often blasts Trump's actions online and retweets liberal and progressive lawmakers such as Bernie Sanders, Ted Lieu, and Maxine Waters.

Still, many commentators are calling the block an unprecedented show of disrespect toward veterans, and even a potential violation of their First Amendment rights. The Knight First Amendment Institute at Columbia University is representing a group of Twitter users that have been blocked by Trump on the grounds that those blocks are in fact discriminatory.

“Though the architects of the Constitution surely didn’t contemplate presidential Twitter accounts, they understood that the president must not be allowed to banish views from public discourse simply because he finds them objectionable,” Knight Institute director Jaleel Jaffer said in a statement. “Having opened this forum to all comers, the president can’t exclude people from it merely because he dislikes what they’re saying.”

Trump's Twitter account has been especially controversial over the last several weeks. The now infamous "covfefe" incident prompted new legislation in the House, a bill which sponsor Representative Mike Quigley of Illinois cleverly titled the COVFEFE Act. The new law would define tweets as protected communications under the Presidential Records Act, making the action of deleting a tweet from the president's account illegal. The legislation does not address the blocking options on Twitter or other social media platforms, which could require a separate Congressional act, or even a court case, to clarify.

Even if Trump's block does constitute a First Amendment violation, the biggest takeaway from this incident is just how fragile Trump is. Anyone with the smallest, slightest aptitude for political calculus could tell you that any conflict with veterans is bound to get you a lot of bad press, yet Trump still couldn't help himself from slamming that block button. It's concerning in the context of the nuclear codes, but in the context of Twitter trolling, it's very comforting to know how easy it is to make Trump mad.