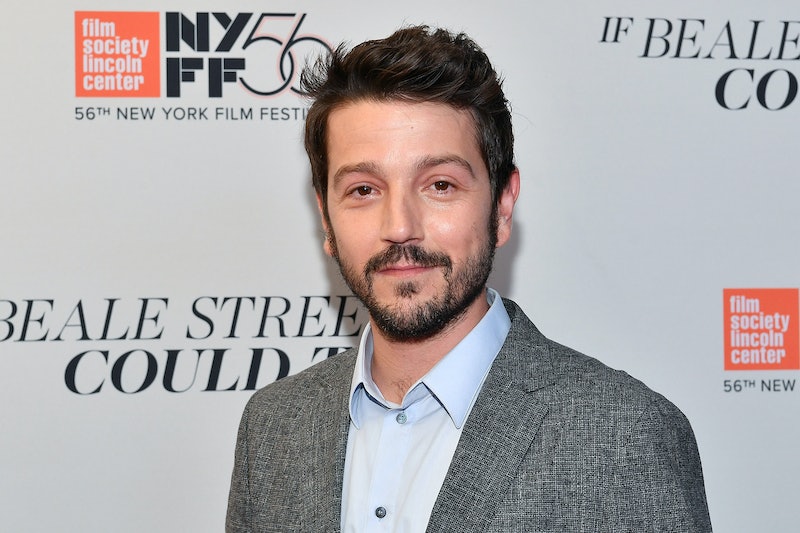 Good news, Star Wars fans, one of your movie favorites is getting his own show. According to The Hollywood Reporter, Diego Luna will star in a Rogue One prequel series for Disney's upcoming streaming service, Disney+. The actor is set to reprise his role as the rebel spy Cassian Andor, with the series taking place during the early days of the Rebellion. Disney's official press release describes the show as a "rousing spy thriller" that "will explore tales filled with espionage and daring missions to restore hope to a galaxy in the grip of a ruthless Empire."

Luna sounds excited to be stepping back into Cassian's shoes. The actor said in a statement to THR:

"Going back to the Star Wars universe is very special for me. I have so many memories of the great work we did together and the relationships I made throughout the journey. We have a fantastic adventure ahead of us, and this new exciting format will give us the chance to explore this character more deeply."

The untitled series is set to go into production in early 2019. There's no estimated premiere date just yet, but for fans of Rogue One and the rest of the Star Wars universe this news is sure to make Disney's streaming service look a whole lot more tempting. Of course, Luna's show is the second Star Wars series that Disney has announced so far. The first is The Mandalorian from Jon Favreau.

Luna's Cassian emerged as a fan favorite after the 2016 release of Rogue One. Unfortunately, certain events in the film made a return in future Star Wars projects a bit tricky. That makes the news of the rebel character getting his own series all the more exciting.

So far, the fan reaction on Twitter has been overwhelmingly positive. It seems that while getting a Rogue One prequel series is exciting all on its own, having Luna on board to star takes the project to an entirely different level. And the Twittersphere isn't being shy about expressing their joy.

Twitter user @runwithskizzers is one of many fans who is pointing at that the prequel series is also a major win for representation within the Star Wars universe. They tweeted, "Like y'all the potential for story hereabout a real life poc (like NOT A CARTOON as much as I love those) getting to have a Star Wars SERIES. I cannot. I CANNOT." Another user, @FrankieGodoy tweeted, "Diego Luna getting his own Star Wars show has me incredibly hyped. Glad to know the galaxy is filled with badass people of color."

Even though it's likely going to be a while before Disney reveals more details about the series, it seems safe to say that the Star Wars fandom is going to be reveling in this news for quite some time. As fun as movies are, a film simply wouldn't offer as much depth as a series promises. And it seems pretty clear that the more Cassian there is, the better.

Prepare yourselves now, because this Star Wars series sounds like the one that many fans have been waiting for.