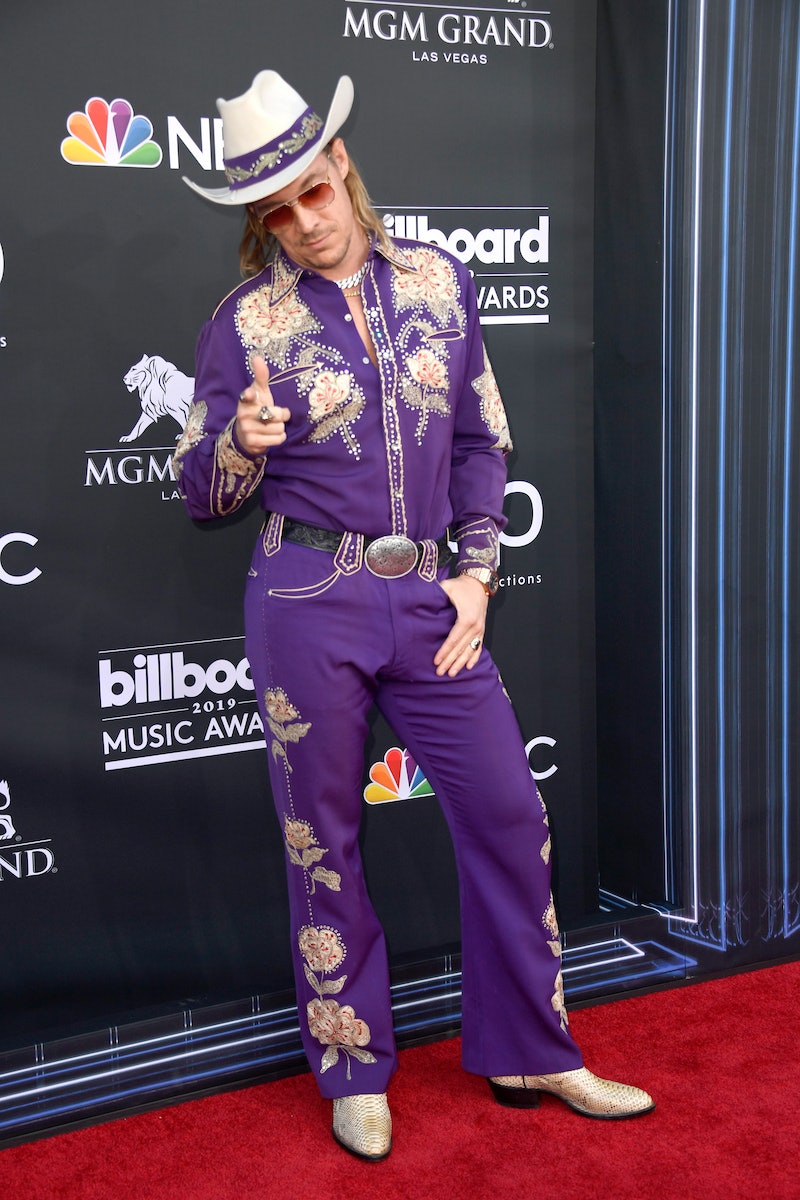 Every wedding needs a good DJ — even if you have to confiscate his phone. On Sunday, Diplo shared a post from Joe Jonas and Sophie Turner's wedding on Instagram, and his message included a hilarious reference to his live-streaming of the couple's first ceremony in Las Vegas. The DJ's photo showed him in his suit for the couple's official wedding, on the steps of what is likely the venue. He tagged the post to Avignon, France — in April, Turner's life coach Mike Bayer posted a photo of the wedding invitation, accidentally revealing the ceremony's location, as per Us Weekly.

Bayer wasn't the only one to spill wedding details. In May, Diplo live-streamed Turner and Jonas' nuptials in Las Vegas, as per People. The live stream sparked a friendly feud among the stars, but it seems the drama didn't prevent him from getting an invite to the official wedding. Diplo posted a picture at Turner and Jonas' ceremony on Instagram, captioning it:

"This is the only photo I got from Joe and Sophie Turner Jonas wedding because they took my phone from me and put in a holding cell during the ceremony. Heard it was lovely tho"

Of course, the DJ wasn't actually banned from the event, but it seems the couple may have advised against sharing their big day on social media.

In May, Jonas joked that Diplo "ruined" his first wedding, as per Refinery 29, after the DJ revealed the impromptu ceremony was happening to fans via his Instagram Story. "Yeah, he did ruin it," Jonas said during an interview on Capitol FM's Breakfast radio show. "Love Diplo, but he loves his 'gram more than a 13-year-old. He posts every five seconds. He literally, like, live streamed with dog-face filters."

Later that month, Turner also noted that the marriage would be a secret if not for the DJ in an interview with Net-A-Porter. However, the Game of Thrones actor was sure to note that the whole debacle got a laugh from the newlyweds. "It would have been better if no one had known, but I actually think it was funny," she said. "I think at some point I would have had to stop saying 'fiancé,' but yes, I would have kept it a secret. Marriage is a private thing between two people and I think that's how it should always be."

In early June, Diplo addressed the lighthearted feud during an interview with On Air With Ryan Seacrest. Apparently, the DJ didn't realize the wedding was truly happening, or that he was the only one at the event sharing video online. "I didn’t know it was a serious wedding. I really didn't know what was going on," he said. "I was hanging out with him after the Billboard Awards, I was just hanging out with him like, 'This is crazy, dude. Let me record this.'"

Diplo joked about Jonas' comments on Instagram on May 30 posting a picture of the tabloid story. He tagged both Turner and Jonas in the picture, and captioned the post, "the only thing that 'ruined' the wedding was your fit." Jonas commented on the post with an eye-roll emoji, but it's clear there's no hard feelings between these pals.

Diplo is currently working on a musical collaboration with the Jonas Brothers, as per People, which is what brought the DJ into the couple's orbit. He remains good friends with the duo, and clearly they wanted him to DJ their real wedding, even if that meant taking away his social media access.