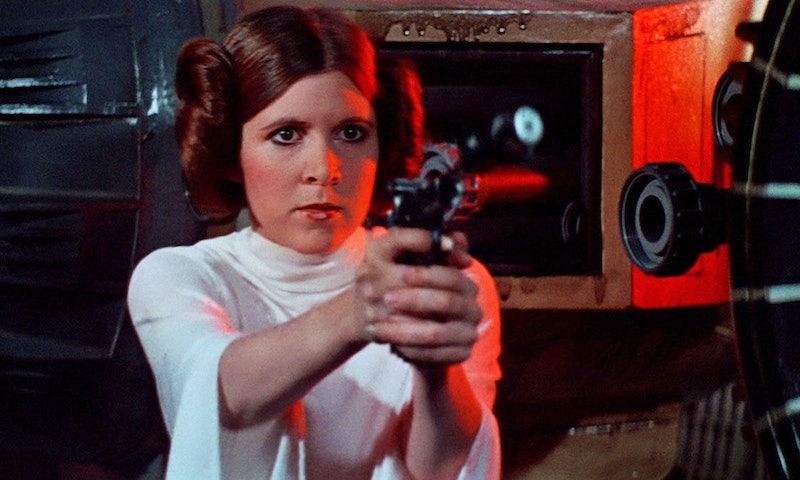 The masterminds at Disney sure know how to tug at nostalgic parents’ hearts — and purse strings. According to the Disney Park Blog, the Bibbidi Bobbidi Boutique will be offering Star Wars Princess Leia makeovers for kids. As part of the experience, kids ages 3-12 can fully embody everyone's favorite princess-turned-general in the resistance Leia Organa or the franchise's powerful new leading Force-user Rey through makeup, hairstyling and costumes. This stands as the perfect opportunity for parents looking to teach their children how cool it is to fight for goodness and justice — and pass on a love of Star Wars to the next generation — through an awesome dress-up party.

According to Disney Park Blog, the makeovers are offered exclusively at the Bibbidi Bobbidi Boutique aboard the Disney Fantasy cruise line during "Star Wars Day at Sea." The Leia costume is decidedly from her early princess days, with the long white gown she sported in A New Hope along with her iconic double bun hairstyle. The Rey costume meanwhile might be easier to wear for active girls looking to show off their lightsaber spins (if these kids are like my nieces then they do this move that involves spinning around in circles with a plastic lightsaber a lot).

It should be noted that it appears that Leia is the only character offered from the original trilogy. The pictures of the costume options in the Disney Parks preview include Leia with characters from the latest installments in the Skywalker saga, Rey, Poe Dameron and Kylo Ren. So, it would seem that if a kid wants to dress up like one of the action sci-fi franchise's most recognizable heroes, their best option is to ask to play a female character (sorry Poe, but Luke Skywalker and Han Solo you are not — at least not yet). How often can you say that about a blockbuster with the word "war" in the title?

These new dress-up options are a great new direction for Disney. Four decades ago, Carrie Fisher as Princess Leia broke the stereotypes so often seen in the Mouse studio's early animated features. While young children might still love Cinderella, Sleeping Beauty and Snow White, Leia offers them a movie role model that is far from a damsel in distress. Luke and his friends might have rescued her from Darth Vader in Episode IV, but she uses fast thinking, and biting one-liners, to carry her own. It's also her brains, and not her beauty, that later make her a strong military leader.

In the new movies, at least so far, Rey continues that tradition and then some. She is not only a character fully developed outside of a romance, but she is also one of the strongest people shown in The Force Awakens. Despite her lack of training, she is able to go head-to-head with the Force against Kylo Ren, who, as Luke's nephew and the newest Sith Lord, must have previously been schooled thoroughly in the ancient ways of the Jedi.

I know what you're thinking: it's awesome that kids get this dress-up opportunity, but where's the special salon for grown-ups? The Disney Parks blog promises a special Rey makeover for adults and teenagers, that includes makeup, hairstyle and a "stylish dress." You can also choose one of four Star Wars-themed T-shirts if you don't want to be part of the Rey clone army. And, if you want to show your allegiance to the resistance, by all means go ahead and pack your own Princess Leia outfit — if there's one thing Liz Lemon taught us on 30 Rock, it's that a Leia costume has many, many different purposes.