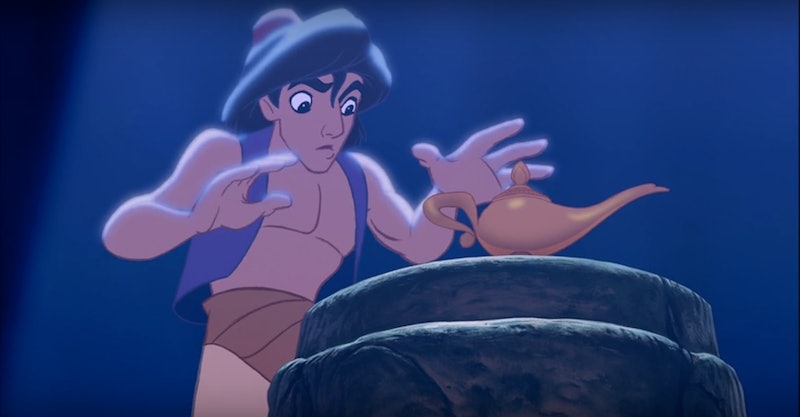 Believe it or not, Disney is apparently having difficulty finding an actor in his 20s of Middle-Eastern or Indian descent, who can sing and dance. What, you don't believe it? Well, neither does the internet. After The Hollywood Reporter revealed that Disney and director Guy Ritchie are reportedly having trouble casting Aladdin in Disney's live-action version of the film, Twitter stepped in to help. (Bustle has reached out to Ritchie and Disney for comment on the casting, but did not receive an immediate response.) Seemingly out of the goodness of their hearts, some very hardworking Twitter users have decided to taken things into their own hands and provide a few suggestions for who could star in Aladdin.

Even though fans offered suggestions, that doesn't mean that they weren't angry, especially since Disney reportedly is struggling, even after a global casting call. As comedian Jenny Zang joked in all-caps on Twitter, "THERE IS LITERALLY AN ENTIRE SECOND MOST POPULOUS COUNTRY IN THE WORLD W AN INDUSTRY OF MEN WHO DANCE AND SING." Meanwhile, others are worried that Disney being unable to find someone may mean the role will get whitewashed. It's certainly not a silly concern, since it was rumored that British actor Tom Hardy could be up for the role of Jafar.

The Hollywood Reporter noted that the studio was interested in Lion's Dev Patel or Rogue One's Riz Ahmed, but is now leaning toward hiring a newer, younger actor to take the role. To help make things easier, the internet has come up with more than a few ideas of who would make the perfect Prince Ali alongside the film's Genie, Will Smith.