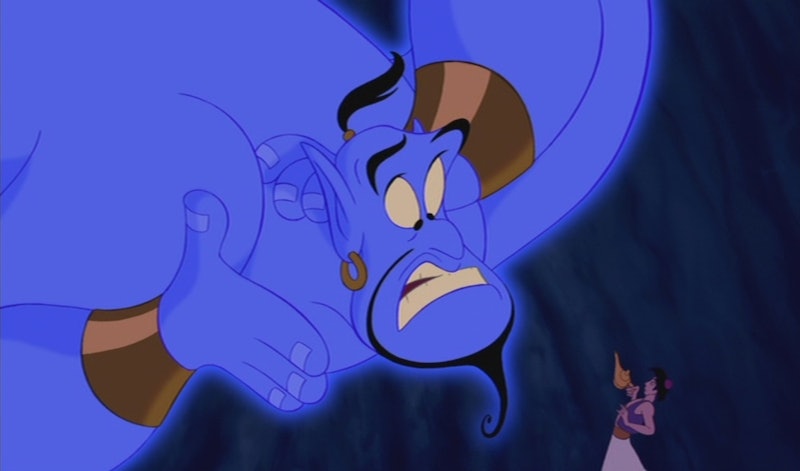 Remaking animated Disney films into live-action versions is a super hot ticket right now. With beloved movies like Mulan, Beauty and the Beast, The Little Mermaid, and Dumbo all on the docket, it seems like Disney is on a mission to get live-action versions of every single one of their animated properties. It's easy to see why, as the studio has found success, financially and/or critically, with live versions of animated classics like Alice in Wonderland, Maleficent, The Jungle Book, and Pete's Dragon. But there's one movie that I wish Disney would leave alone: 1992's Aladdin. On Oct. 10, it was reported that Guy Ritchie is in talks to direct a live-action version of the classic animated film, and while many fans were likely pleased, I wasn't. And it's not because I don't enjoy a good live-action remake — it's because a remake of Aladdin would simply not be Aladdin without the talent of Robin Williams as the Genie.

As we all know, Williams, who brilliantly voiced the beloved Genie in the animated Aladdin, tragically took his own life in 2014. Although his incredible roster of work included comedies, dramas, and satires, his voice performance in Aladdin stood out from the pack. As the Genie, Williams wasn't just his usual level of hilarious; his improvisational skills, impersonation abilities, and quick-thinking pop culture references were simply on another level. While there have been other versions of genies in pop culture, the Disney version is a character quintessentially Williams, and making a new version of Aladdin without the actor just wouldn't be the same.

And fans actually already know how sad an Aladdin movie without Williams would be. The actor did not return for 1994's straight-to-video Aladdin sequel The Return of Jafar, a movie that was, let's say, a little lacking. Williams' absence wasn't the only thing that made the sequel a bummer, but it was probably the biggest reason it isn't well-loved. The genie was voiced by Dan Castellaneta instead, and while he makes a valid attempt at capturing the character's spirit, there's just some magic missing without Williams' talents. Thankfully, Williams returned for the third movie, 1996's Aladdin and the King of Thieves, another straight-to-video sequel that was worlds better than the second film. The improvisation was back, the impressions were back, the magic was back, the Genie was back. Clearly, having Williams on-board is key to making an Aladdin film that's well-done and satisfying to fans.

I do understand, of course, that there's an acclaimed stage version of Aladdin going on on Broadway right now with the wonderful James Monroe Iglehart playing the Genie. Iglehart's performance is great, and he deservedly won the Tony Award for Best Featured Actor in a Musical in 2014. But theater is a whole different ball game, requiring a different sort of acting talent, and Iglehart's stage Genie is a completely different creature than WIlliams' was. Iglehart's is more majestic and mysterious, rather than the pop culture-obsessed, sarcastic, and quick witted Genie that Williams created; even more, the Genie's jokes and impersonations seen in the film are rooted in cinema, which wouldn't translate well to stage.

But my biggest concern is doing justice to Williams. I fear that anyone who takes on the role of the Genie would be trying to emulate, or even impersonate, Williams' performance, which feels to me like it'd be in ill taste. Any imitation would only remind people of the talent that we've lost. And even if the new actor has a completely different take on the Genie, it still wouldn't feel like a real Aladdin movie. Other live-action remakes of animated Disney films have recast leads and replaced voice actors of years past with new ones, but no Disney character has been, or may ever be, as associated with their voice actor as much as the Genie is with Williams. I understand why an Aladdin remake is tempting, but out of respect for Williams and in order to keep the film's legacy alive, perhaps the film should just be left alone.