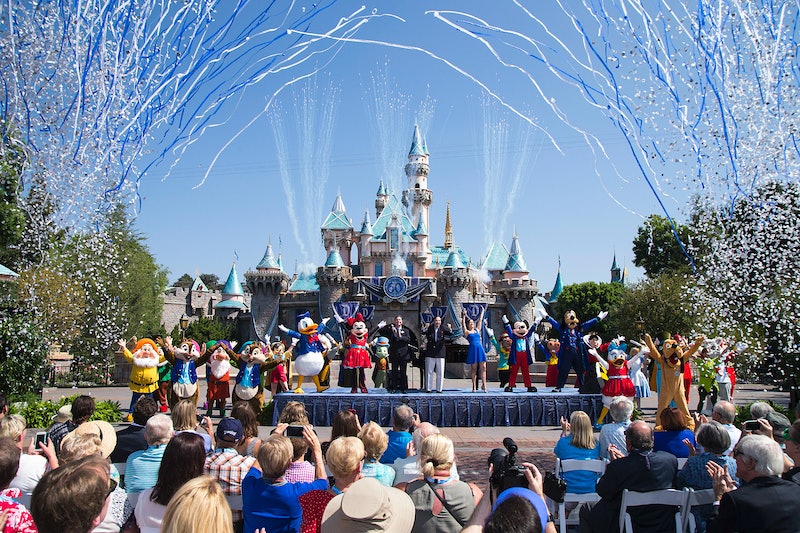 Get ready to say goodbye to one of Disneyland’s most iconic —and problematic — ride scenes: The “bride auction” scene in the Pirates of the Caribbean ride at Disneyland Park in Anaheim, Calif. is finally being removed. The ride will be closed for refurbishment beginning on April 23, according to the OC Register; although it’s not yet known precisely when it will reopen, we do know that when it does, the chants of “We wants the redhead!” as a woman in a red dress is placed on the auction block will be absent — or else presented in a completely different context.

The removal of the scene didn’t come out of the blue; the Walt Disney Company announced that the change was forthcoming not only to Disneyland, but also to Disney World in Orlando, Fla. and Disneyland Paris, nearly a year ago — during the summer of 2017. The change actually came to Disneyland Paris first; it was part of a major update to the European version of the ride which included many of the alterations that had already been made to the U.S.versions following the popularity of the Pirates of the Caribbean film franchise. When the Disneyland Paris ride reopened on July 24, wrote Kathy Mangum, senior vice president of Walt Disney Imagineering, in a post on the Disney Parks blog published on June 29, 2017, it would include Captain Barbossa, Davy Jones, and Blackbeard — along with a little something new: “You’ll even discover that a familiar character is playing a new role joining the pirates ranks and helping the local townspeople ‘unload’ their valuables at the Mercado auction,” wrote Mangum.

The “familiar character” was The Redhead from the bride auction; the new version of the scene will quite literally flip the script, with The Redhead becoming a pirate herself, auctioning off not brides, but loot. (That's the concept art for the scene up there.) Suzi Brown, spokesperson for the Disney Resort, told the OC Register last summer, “We believe the time is right to turn the page to a new story in this scene, consistent with the humorous, adventurous spirit of the attraction.”

Said Mangum at the Disney Parks blog, “In the U.S., this famous redhead will appear in a similar scene at the Magic Kingdom Park and Disneyland park in 2018 following a previously scheduled refurbishment" — and, true to their word, Disney has begun executing the refurbishments this year: The changes to the Walt Disney World version of Pirates of the Caribbean are already underway, with the ride set to reopen on March 18 — and now Disneyland is following suit.

However, not everyone is happy with the change, among them David Koenig, author of a number of unofficial histories of the Disney parks. Speaking to Mercury News, Koenig said, “The bride auction is being removed because Disney is lily-livered,” Koenig said. “No one is really offended by animatronic pirates acting lusty. It’s in-character silliness. I don’t advocate gunplay, thievery, alcoholism or sexism, but I’m still able to enjoy a show in which pirates behave like pirates.”

Some folks on Twitter have expressed similar views, too:

This defense, though, is problematic at best. It’s true that the looting and pillaging that characterizes much of the ride are also not great; the difference is that our culture doesn’t normalize them the same way it does sexism and the objectification and sexualization of women. A 2012 study, for example, found that people literally see women as a collection of body parts, rather than as whole human beings — but the same is not true for how people see men. And, as you might imagine, both perceiving someone this way and being perceived this way has a profound impact on how women are treated in a variety of settings. According to a 2014 study, for instance, the objectification of female partners’ bodies in heterosexual relationships relates closely to sexual pressure and coercion. Wrote the researchers:

“Men who frequently objectify their partner's bodies by excessively focusing on their appearance are more likely to feel shame about the shape and size of their partner's body, which in turn is related to increased sexual pressure (i.e., the belief that men expect sex and that it is a woman's role to provide sex for her partner) and sexual coercion, both in general and through violence and manipulation.”

And in the workplace, a recently published survey found that nearly a quarter of men think it’s OK for an employer to ask employees for sex. (It’s not. It’s sexual harassment. Full stop.)

What’s more, a 2016 study found that sexist jokes normalize sexist behavior — something which is particularly striking when you consider the fact that the bride auction scene is played for laughs. So, yeah: People seeing looting and pillaging in a fantasy ride probably aren’t likely to go out into the world thinking looting and pillaging are OK. People seeing women being auctioned off for brides, however — and seeing that scene played for laughs — are actually quite likely to think that sexist behavior isOK. The might not think that it’s A-OK literally to auction off people like objects; however, they very well could think it’s OK to, say, expect that treating a woman to dinner means that she owes them sex. Or, y’know, any other form of the everyday sexism women regularly experience.

Obviously this isn’t the first time that Pirates of the Caribbean has been updated to reflect changes in society; since the very first version of the ride opened in 1967, numerous details have been altered, including a background scene where pirates once chased women around their home (which pretty clearly spells out intentions of rape) — as of 1997, the pirates are either chasing the women for food specifically, or else they're actually chased by the women, who fend them off armed with brooms and other such items — and the major addition of characters from the Pirates of the Caribbean films in 2006. (It’s probably also worth noting that the continued inclusion of Jack Sparrow in light of the issues surrounding Johnny Depp is also kind of problematic — but that’s a subject for a whole ‘nother essay.)

The outcry against these kinds of alterations always seems to come from a resistance to change more generally — the idea that because something has always been a certain way, it needs to stay that way, forever. The thought process seems to be something like, “Well, if this thing has been this way for so long, well, then, clearly it’s not a problem, right? It wouldn’t have lasted that long if it were!” Trouble is, that’s fundamentally incorrect; just because something has always been a certain way does not, in fact, mean that it has never been a problem, or that it shouldn’t ever change. In fact, being able to identify something problematic for what it is, even when history has insisted that it’s fine, is a sign of progress — progress that desperately needs to occur.

And for all the naysayers, many people are totally on board with the change — even if they didn’t necessarily have strong feelings about the bride auction scene in and of itself. Said Dusty Sage of the Micechat.com forum to the OC Register:

“Disneyland needs to reflect the times, and it seems to me this is the time to change it. It’s uncomfortable even for me to see women being sold into bondage and human trafficking. I can’t even imagine what little girls think about this. It seems to me that Disney was just ahead of the curve on all this ‘Me Too’ movement, because they announced this change last summer.”

Or, as YouTuber Jenny Nicholson put it:

Others poked fun at how irate some seem to be over the change:

Including another one from Jenny Nicholson, who honestly has had both the funniest and most thoughtful responses to the whole to-do:

And columnist Catherine Rampell summed it up succinctly:

That, I think, says it all: It’s probably for the best.

The revamped Disneyland version of Pirates of the Caribbean will open sometime in 2018. Stay tuned; there will probably be plenty more reactions to talk about when it does.