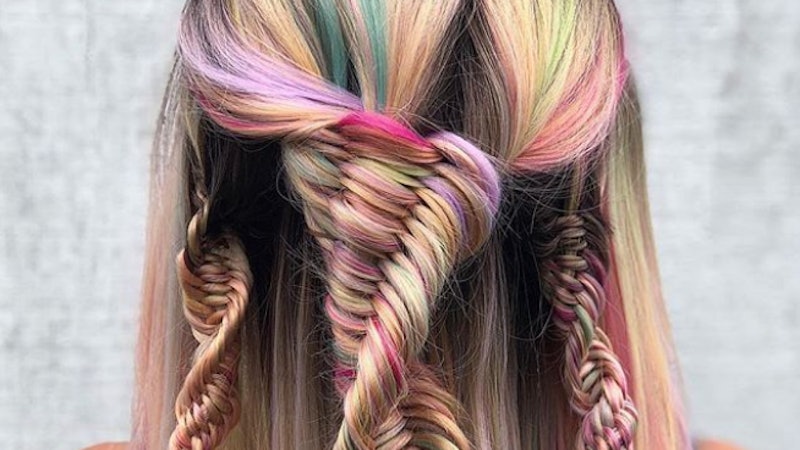 Instagram has got to be one of the greatest sources of beauty inspiration. You can learn just about anything from the 'Gram, whether it's how to do a cut crease or curl hair without hot tools. The latest technique to takeover the app, DNA braids are going viral and they'll likely have you dying to recreate the look.

There's no better time to rock a trendy braid than during the summer. It's the season of vacationing and weddings galore, so a braided 'do can make for one of the best protective and mesmerizing styles. Just when you thought it couldn't get any better than the braided rose hairstyles and the colorful hair trends that once flooded Instagram, a braiding wiz of a hair stylist put together a 'do that's quickly making its rounds on social media. Luckily, there's a tutorial for nailing the look for anyone who feels so inclined to recreate it.

Trust that this intertwining masterpiece isn't for the faint of heart, however. It's a complex braid like no other that'll surely have your eyes fixated to your screen. Thanks to East Greenwich, Rhode Island based hairstylist, Alexandra Wilson, AKA @alexandrelee1016 on Instagram, the DNA braid is getting all of the praise it deserves.

If you're itching to try something new with your mane, look no further than the DNA braid. It's not your average fishtail, cornrow, or French braid, but rather something much more stunningly intricate. Though the braiding technique may not be anything new, it's certainly not a style that you see everyday.

"I have actually seen the DNA braid done before, but it’s just not a popular braid," Wilson tells Bustle. "I wanted to recreate it taking smaller sections so that it really made the braid look intricate. I attempted it because I wanted to try something new and different that a lot of people haven’t seen before," she says.

The owner of her own private hair studio, Wilson is a bridal stylist that has been specializing in braiding for about a year and half. For someone who braids almost everyday, it only took her about 45 minutes to nail the DNA braid technique. Although the trending sensation admits the style is time consuming, she assures it's not too difficult to learn if you can master its pattern. So, getting the gorgeous look all boils down to just how well you can follow Wilson's trending tutorial.

You're not alone if following Wilson's hands with your eyes proves to be difficult. Even with repetitive motions, the DNA braid in action still looks to be tricky if you're not already an avid braider. Wilson explains via her video's caption that you begin the braid with three strands, making the middle stationary strand smaller than the others.

To complete the braid, you simply take a strand from the left section, cross it over, bring it under the middle section and add it to the right side of hair. Next, take a small strand from the right section, bring it under and then over the middle section to be added to the left side of hair. As long as you're consistent with the pattern, Wilson adds that "the braid naturally starts to twist towards left as you go down so you have to keep it tight while braiding".

It may all sound like a bunch of mumbo jumbo, but it's definitely much easier to follow the video after having grasped the written instructions.

Wilson certainly has plenty more jaw-dropping, braided style photos where the DNA braid came from. After all, she's practically a braid whisperer. But the DNA-inspired style has been the most popular look by far amongst her followers and all who have come across the viral video.

"The feedback has been insane. It’s the most liked picture and video that I have on my page," Wilson mentions. "I was hoping people would think it was cool and different, so I’m very happy people loved it!".

Loving the braid is quite the understatement. This is hair artistry on a whole new, mind-blowing level.

More like this
The 9 Chicest Celebrity Bob Haircuts Of 2022
By Olivia Rose Ferreiro
Florence Pugh’s Flipped Bob Is Giving ’60s Bombshell
By Olivia Rose Ferreiro
This Week’s New Makeup Releases & More Beauty Headlines
By Audrey Noble
How To Get Wednesday's "Soft Goth" Lip, Straight From The Makeup Designer
By Audrey Noble
Get Even More From Bustle — Sign Up For The Newsletter