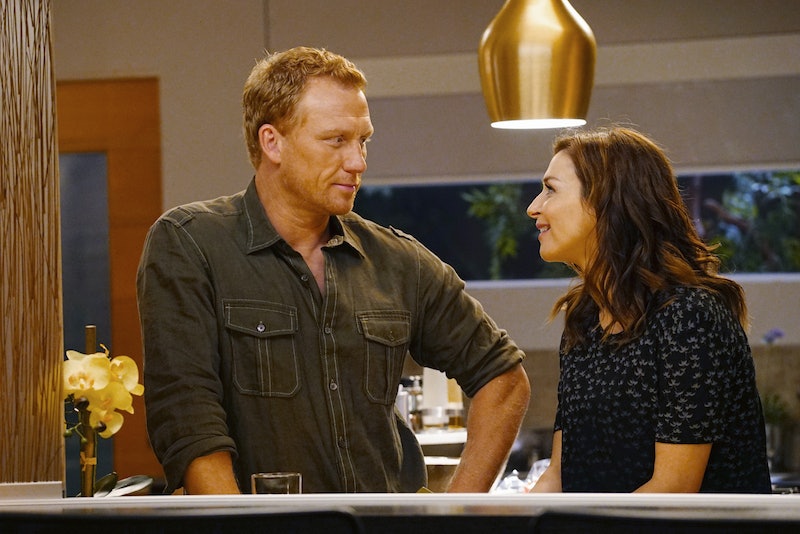 Just as they'd put one problem behind them, another has arisen for Owen and Amelia, who could break up on Grey's Anatomy. The couple had survived the return of Teddy and the news that she's pregnant with Owen's baby, but they may not survive the return of Betty's parents. Betty, real name Brittany, ran away from rehab, but not before calling her parents. When they showed up at the rehab center, she was long gone, but the center pointed them to Owen and Amelia. Now they want Betty's son Leo to come home with them.

Owen is Leo's legal guardian, but he's also only his foster parent. He's going to have a hard time going up against Leo's grandparents for custody — especially with Amelia in the picture. In an attempt to bond with Betty's mom and tell her that she wasn't a bad parent, Amelia revealed that she, herself, is a recovering addict. With that piece of information, Betty's parents can argue that Leo shouldn't stay in the same house as Amelia. Owen was furious when he found out that Amelia had handed them that bit of information. As showrunner Krista Vernoff tweeted, Owen had been hoping to adopt Leo at some point. Amelia could have jeopardized that.

However, Amelia pointed out that Owen had always wanted Betty to be in Leo's life, and maybe him living with his grandparents was what was best. In his anger, Owen insinuated that Betty wasn't fit to ever be in Leo's life again — and any attack on Betty is always an attack on Amelia since they struggle with similar issues.

But not only could that fight potentially come between them, Owen may choose to move on without Amelia to improve his chances of keeping Leo. As Amelia pointed out, they're not married — and she wasn't eager to be what stood in Owen's way of keeping Leo. But Owen didn't even pretend like he'd choose Amelia over Leo, and that has to sting for her as well.

However, tragedy can sometimes bring and keep people together, and it looks like Amelia's about to go through a lot. The synopsis for the Feb. 21 episode says, "The doctors are sent scrambling in the wake of a massive overdose within the community," and the promo hints that the overdose affects Betty too. She's brought into the hospital unconscious, and Teddy can be heard saying, "Amelia may never see that little girl open her eyes again. She’s going to need us."

It's possible Teddy was speaking the hard truth to Owen, reminding him that he loves Amelia and needs to be there for her — especially if something happens to Betty. And, it's looking like Betty won't make it out of the episode alive based on the clip of Amelia sobbing on the floor.

It's already been announced that Grey's Anatomy is giving Amelia an episode focused on her this season, and following what happens to her in the wake of a tragedy like losing Betty (and possibly Owen) would add a lot of drama to the episode.

Owen has always been hot-headed and selfish. It probably wouldn't be shocking for many viewers that he would choose Leo over Amelia (even, though, like, Teddy is pregnant with his child and can he just focus on that baby instead?????). But, first, whatever happens to Betty needs to be addressed, because that could have a big impact on where Owen and Amelia go from here. And if Betty does succumb to her overdose, here's hoping Owen will be there for Amelia like she's been there so many times for him.