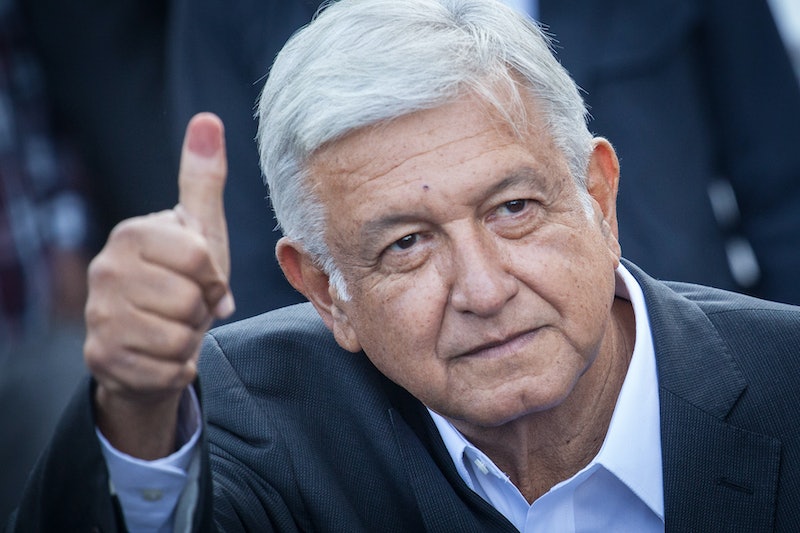 Mexico elected a new leader on Sunday, and this particular president is a symbol of the country's populist furor. Though how Andres Manuel Lopez Obrador will get along with Trump remains to be seen, he hasn't been fond of POTUS in the past. Mexico's newest leader is viewed as being anti-Trump and has expressed one core priority: to make Mexico great again by "combatting aggression abroad with strength," according to The Atlantic.

López Obrador was selected as the next president of Mexico in a landslide victory, pushed to the top by voters who are angry with the country's unchecked corruption and widespread violence, according to The New York Times. Mexico, the second largest economy in Latin America, now has a leftist leader in López Obrador, who has promised to stop corruption, mitigate violence, and work to lower Mexico’s poverty. The election is a stark reflection of the people's desire to flip the status quo and a clear unhappiness with the direction of Mexico's past leadership.

López Obrador has disparaged President Trump's zero tolerance policy that split migrant children from their parents at the U.S.-Mexico border, calling the president “oppressive, racist and inhumane,” according to Newsweek. During his campaign, López Obrador vowed to fight back against any “repressive” immigration policies from the Trump administration, Newsweek reported. “With the triumph of our movement, we’ll defend migrants from Central America, Mexico, and from all over the continent … it’s a human right we will champion,” López Obrador told a crowd in the Culiacán state last month.

Shortly after news of López Obrador's victory broke, President Trump sent a public congratulations to Mexico's newest president. Trump was positive in his tweet, saying he looked "very much forward to working with him" and that there was "much to be done that will benefit both the United States and Mexico."

But, if López Obrador (called by his initials AMLO, for short) keeps his campaign promises, the work he does will place Mexico's interests solely at the forefront. “It’s important to recognize him as an economic nationalist, and it that sense, there is a great deal that he has in common with Donald Trump,” said Duncan Wood, director of the Wilson Center Mexico Institute, to Newsweek. “AMLO talks about producing food, gasoline and automobiles in Mexico. He wants to bring much more production back to Mexico, which is very similar to Donald Trump’s rhetoric. He has been criticized for having authoritarian tendencies. He doesn’t like people to disagree with him, so that’s another thing he has in common with Donald Trump.”

While some see this as a positive change, those critical of López Obrador caution that he'll be more "combative" against the United States than the current president, Peña Nieto, according to The Washington Post. If he is, critics fear the U.S.-Mexico working relationship could degrade harshly.

Some on Twitter spoke to López Obrador's fiery persona as well, framing his victory as a reflection of the country's anti-Trump sentiment.

President Trump certainly played a role in Mexico's election. Though Trump himself wasn't a divisive issue — every candidate voiced opposition to Trump's border and trade policies, according to The Washington Post — voters had to cast their ballot for a president that had the perceived strength and temperament to wrestle his way to a stronger standing within U.S.-Mexico relations.

And then there's López Obrador's dramatic optics break from past leaders. Throughout the past several decades, Mexico's leadership has been stacked with "technocrats" and politicians who were pro-America. In contrast, according to The Washington Post, López Obrador's idols are Mexican independence and revolutionary leaders who challenged more formidable countries, fighters willing to take on foreign Goliaths to their David.

On Sunday, news outlets noted the promises made in López Obrador's victory speech.

López Obrador promises to tackle the crime and violence that President Trump has repeatedly harped on (often with false statistics). With radically different leadership, the country may be headed in a new direction. Mexico's newly-elected president may have reserved some harsh words for Trump in the past, but it seems they may share some of the same incentives drawing them together for the future.