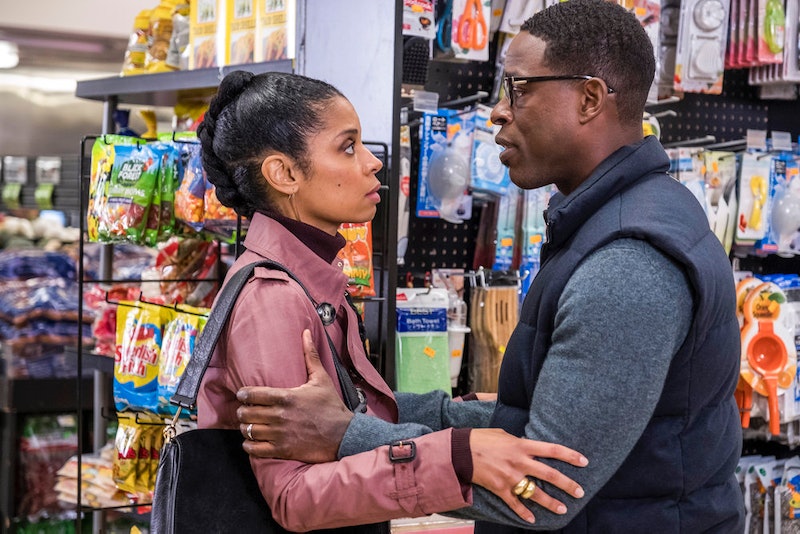 Spoilers ahead for This Is Us Season 3, Episode 17. This Is Us continued to spotlight Beth's backstory on Tuesday's episode as it chronicled how Beth and Randall met, began dating, got married, and built a family together. But as sweet as those old moments were, they also had inklings of what may be to come in the present. Do Beth and Randall get divorced on This Is Us? Their most recent fight was absolutely brutal.

After the episode took viewers back to the beginning of their romance, it jumped back to present day where Beth and Randall were arguing in their bedroom. Beth explained that she'd had enough of bending her desires to support Randall and always be there for him. He didn't think their lives have ever been catered around his whims. But Beth explained that she wanted it to be her turn to shine, and in trying to tell that to Randall, she made a comment about how she never got to explore her passion for dance because Randall was always having anxiety attacks. It was a low blow, and she immediately realized it. But Randall was already done. He stormed out of their room and back to Philly to sleep on his office couch. Can the duo move past this? All signs fortunately point to yes.

First of all, as Vulture pointed out, Randall was still wearing his wedding ring in one of the the flash forwards.

Secondly, both the actors who play Beth and Randall are rooting for them. "I stay Team R & B," Susan Kelechi Watson, who plays Beth, told Glamour. "Team Brandall, however you want to say it. I hope for the best."

Sterling K. Brown, who plays Randall, echoed his TV wife's feelings. "I’m not Team Randall or Team Beth. I’m on the team that wants to see this couple work it out," he told the magazine. Brown added in an interview with E! News that he's staying hopeful that they'll be able to work things out and come out on the other side even stronger.

"We wanted them to have a relationship that was worth of the #Goals that people put in front of us, but also have it be earned," Brown said, adding:

In any case, answers are coming in the April 2 finale. At Paleyfest, creator Dan Fogelman said, "Obviously there’s a tremendous amount of attention on Randall and Beth’s storyline. There will be an answer there in terms of the long-term health of their relationship." So fans will soon find out the fate of the show's strongest couple. But don't give up on these two yet, because R & B may be having some marital strife now, but they were built to last.

More like this
Paul Mescal, Man Of Mystery
By Samantha Leach and Heather Hazzan
'Interview With The Vampire's Lestat Is Sam Reid’s Biggest Role Yet
By Kadin Burnett
Aemond Targaryen's Fate On 'House Of The Dragon' Is Full Of Revenge In The Book
By Grace Wehniainen
‘SNL’ Finally Spoofed Nicole Kidman’s Weirdly Beloved AMC Ad & Nailed It
By Stephanie Topacio Long
Get Even More From Bustle — Sign Up For The Newsletter