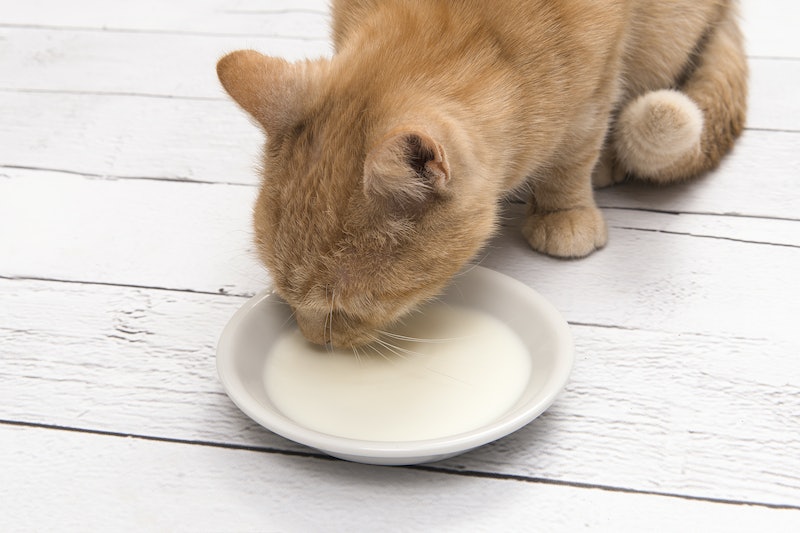 MirasWonderland/Shutterstock
By Alli Hoff Kosik
Updated: May 11, 2018
Originally Published: May 10, 2018

Like all species of animals, cats have been saddled with their fair share of stereotypes. As kids, we were taught to imagine that all felines could be found frolicking daintily through the house after an errant ball of yarn, losing their minds over some catnip, or politely lapping at a dish of perfectly white milk. There are some cats, I'm sure, who can't get enough of any or all of these activities, but is it really fair to assume that they're favorites of every feline? Having grown up with cats, I, for one, have never seen one drink milk. I always wondered if our cats were the exception or the rule. Out there in the rest of the world, do cats really drink milk? Or is this just one of many not-entirely-true assumptions that we've made about cat-kind?

Before I go any further, I think it's important that we establish that there's tons of diversity within the feline world. Just like individual humans, individual cats are prone to have personal preferences and dislikes, so there's no way for us to truly confirm or deny that all cats have a thing (or not) for dairy. What we can determine, I think, is whether or not felines are prone to enjoying milk... and if it's even healthy for them.

Vetstreet confirms that cats are, in fact, drawn to milk. Just as dogs get a little slobbery for bones and liver treats, kitties are usually interested in tasting a bowl of dairy. Our understanding of cats as universal milk lovers, however, actually stems from the extent to which they enjoy cream. According to CatTime, cats much prefer this variety of the beverage. Traditionally, families who kept cows would give the cream that rose to the top of the cows' milk to their cats, who were mostly in it for the fat. These days, most milk is so low in fat that it lacks some appeal for felines, anyway.

The real question, perhaps, is whether or not cats even should indulge in milk. While conventional wisdom has taught us that it's a perfectly normal feline treat, the online veterinary community seems to disagree. Science Focus even lists "Milk makes an ideal food for cats" as the biggest cat-related myth out there! "The milk we now buy in supermarkets contains little fat, and while some cats may like it for its taste, many do not find it easy to digest," Dr. John Bradshaw notes in Science Focus.

According to Dr. Bradshaw, cats are born able to digest lactose (the primary sugar in milk), but their ability erodes over time. After kittens are weaned, the enzyme lactase — which facilitates the easy digestion — starts disappearing from their systems. As a result, according to Science Focus, adult cats may experience upset stomachs after drinking milk or cream, since the undigested lactose can begin to ferment.

If this sounds similar to your own experience with dairy, you're not entirely off-base. The process I just described in which lactose doesn't properly digest in a cat's gut is basically lactose intolerance. According to CatTime, most cats are actually lactose intolerant! This makes the whole cats-love-milk generalization especially hilarious, but also kind of dangerous, since it can cause a lot of pain and discomfort for our beloved furry friends.

It's not exactly exciting, but water is the best and safest drink for cats, per CatTime. If your pet is really interested in milk, you can consider buying lactose-free milk for them at the grocery store, but your cat might not even be interested in it! Since cats are mostly interested in milk and cream's fat content, Lactaid probably won't be up their alley... but it won't make them sick either.

More like this
I Tried The $20 TikTok Viral Oishii Strawberries — Here's What I Thought
By Sophie Hanson
Trust Me, Pickle Martinis Are The New It Drink Of The Season
By Emma Carey
So Many Dog Owners Are Obsessed With These Weird Dog Products
By Veronika Kero
Amazon Keeps Selling Out Of These Pet Products With Near-Perfect Reviews
By Madison Barber
Get Even More From Bustle — Sign Up For The Newsletter

This article was originally published on May 10, 2018