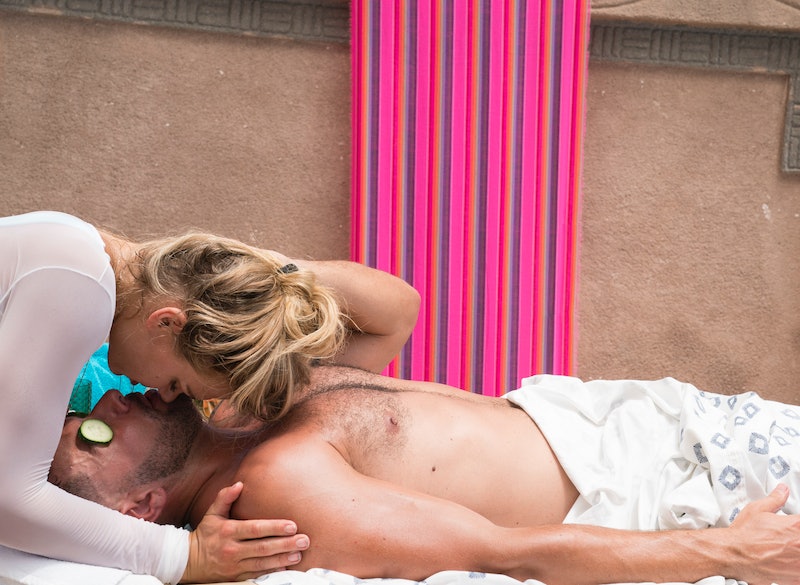 Seriously, if you had bet me $10,000 that Chris and Krystal would end up together on Season 5 of Bachelor In Paradise, I would laughed right in your face. But you know what? You would have one. Not only are Chris and Krystal together, they are engaged and actually happier than they were on the beach. During the finale they shared some of their wedding plans, but what about real life? Do Chris and Krystal live together?

After a little pre-filmed clip in which Chris visited Krystal at her hosue and met her dogs, Wayne and Chucky, the pair revealed that they would be making a trip to move in together "soon," though they didn't give a timeline or a location. Still, it's happening.

During the finale, Chris started crying in the hotseat, and after everything that had happened with Kamil and Annaliese earlier (that was wild), it was entirely possible that he was ready to break the bad news to Krystal that they weren't meant to be after all. But instead, he was crying tears of happiness that he had finally found his person and that they got along so well. They both couldn't say enough loving, kind things about each other, and both of their moms were in the audience, too. Turns out, they're all one big happy family now.

Chris is from Florida and Krystal is originally from Montana, but currently lives in Los Angeles. So they'll have to come to some agreement about what sunny city to call home, but they way these two lovebirds are getting along, it looks like they'll make it happen. Krystal is a fitness coach, so she can really live anywhere. Though Los Angeles is a good place for that kind of work. Chris is sales guy, so he can definitely do that anywhere, too. Hilariously, these two seem to have little to no conflict at all in their relationship. Chris was even into Krystal's idea of having one or both of her dogs as a ring bearer, which she floated on the finale. You really don't find this kind of love easily, people.

Of course, Chris had to joke around while proposing to her. Back in Paradise, he told her that he was "sorry" that he couldn't leave holding her hand. Her face dropped until he finished, saying that he had to leave with her heart instead. What a silly goose, right? (Ugh, I know, I'm sorry, I hate that nickname, too.) He then added:

"Ever since I came to this beach, I honestly did not know what to expect. It wasn't smooth sailing," he told Krystal during the finale. "I mean, to be honest, there was a moment where I wanted to give up a few weeks ago, but it was you that came to, me and I listened. Honestly Krystal, you've changed my life. You've changed me. You've helped me become a better version of myself."

The rest, as they say is history. If you're going to place bets on any BiP couple from this season, it's these two. Who ever would have thought?