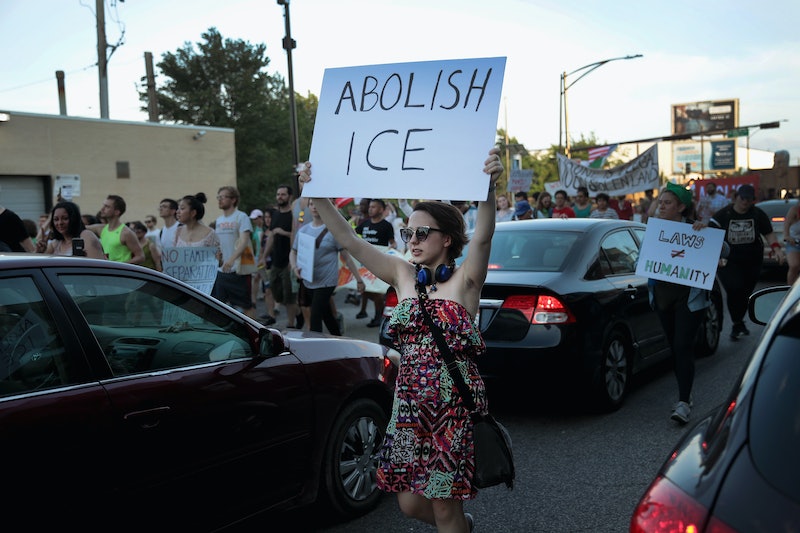 Tensions are high in the House of Representatives because of a Democrat-sponsored immigration bill that Democrats themselves might vote against. If it passes — and that's a big if — the contentious piece of legislation would disband the government agency Immigrations and Customs Enforcement within a year. But when it comes to actually abolishing ICE, Democrats are divided.

ICE was created in 2003, and does things like arrest and deport undocumented immigrants in the U.S. It also looks for criminals involved in nefarious activities like drug trafficking, human trafficking, and weapons smuggling. Democrats on the progressive side created a bill to get rid of the agency after Democratic Socialist Alexandria Ocasio-Cortez's stunning primary victory in New York. Ocasio-Cortez campaigned on abolishing the agency, and after she won her race, big-wig Democrats such as Sens. Elizabeth Warren and Kristen Gillibrand came out in support of her anti-ICE stance.

But not all Democrats are here for the bill — and Republicans are using that to their advantage. The House GOP have said they'll bring this bill up for a vote. Axios reported this may be because it could splinter the minority party and energize the Republican base for the November election.

Although the bill has gained a lot of media attention and support from grassroots activists, many Democrats don’t think it’s the best solution to the problems with immigration that the country faces. But since there’s been so much hubbub about the bill, Republicans are playing on the division among Dems, essentially calling their bluff, and saying: If you can talk the talk on this, you have to walk the walk.

The bill was sponsored by three left-leaning Democratic Representatives: Adriano Espaillat of New York, Pramila Jayapal of Washington, and Mark Pocan of Wisconsin.

But some Democrats told Axios that they don’t support abolishing the agency, which is part of the Department of Homeland Security. They’re worried the bill would make the party look weak on security, which could make a difference to some swing voters.

Democratic pollster Celinda Lake told Axios at the end of June that she worried that “abolishing ICE tips the issues from humane treatment to security. The Republicans are already trying to move the issue in that direction."

And a June tweet from Trump seemed to make Lake’s point. "To the great and brave men and women of ICE, do not worry or lose your spirit. You are doing a fantastic job of keeping us safe by eradicating the worst criminal elements. So brave! The radical left Dems want you out. Next it will be all police. Zero chance, It will never happen!" Trump tweeted.

As Vox put it, Republicans are spinning the abolish ICE idea as “a radical liberal overreach.” And Democrats can't seem to get on the same page about all this.

Pollsters like Lake aren’t the only ones showing opposition to the controversial bill. The Congressional Hispanic Caucus (CHC) has already said they're against the bill. And the sponsors of the bill have said they don't expect people to actually vote for it, Politico reported. Jayapal said the bill was “not a serious attempt to do anything,” but rather a platform to talk about Trump’s immigration policy, as Vox reported.

CHC chair Michelle Lujan Grisham of New Mexico put out a statement noting that the bill won’t truly fix the core of the problems Democrats have with current immigration policies.

Both House Minority Leader Nancy Pelosi and Sen. Bernie Sanders have waffled on the issue, although they both agreed that the agency needs to be restructured and overhauled, Vox reported.

There’ could be a major showdown over a bill that was really only meant to be symbolic in the first place. The Democrats are now in a pickle and have to decide how they will back their party’s progressive ideas.