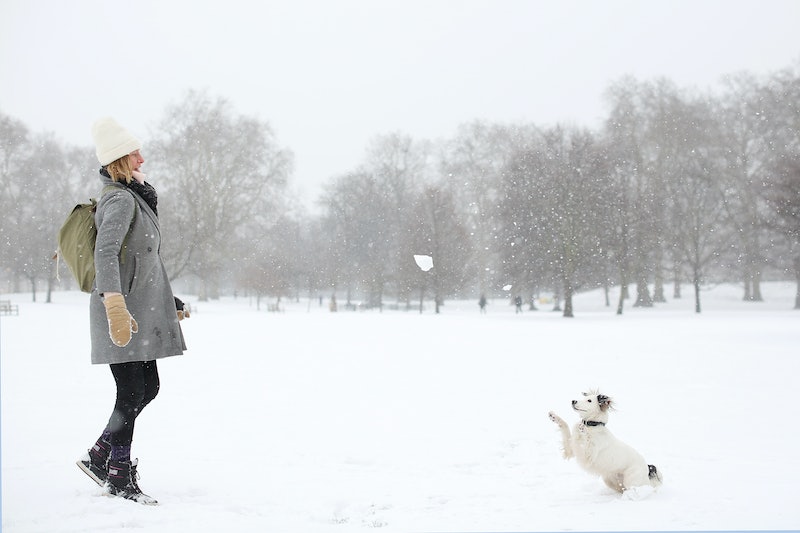 Over the course of the 11 years I've had my dog, a lot of people have come in and out of our lives. From roommates, to friends, to partners, to neighbors — there have been so many people my dog has come to know and eventually let go of. Some people he'd see every day for years, other people he'd see once a week, and other people he'd see randomly here and there. So whether or not dogs forget people has always been a mystery to me. Without being able to verbalize an expression of loss or familiarity, how can a dog owner possibly know? If I had to go by the way my dog reacts to being around certain people he's come to know well, I'd say he has a solid memory of that person, based on his excited reaction.

As I've just recently moved, changing the people who my dog sees regularly, I've been extra curious about his memory. So, I did a little of research to get to the bottom of it — do dogs remember people? And if so, how?

As it turns out, there's not much official research on the topic. The general opinion surrounding the topic is comprised on anecdotal experiences and inferences made by canine behavioralists. We know from YouTube videos that no matter how long a solider seems to be gone, their dog will remember them with gusto — but what exactly is being remembered? According to a PBS report, dogs have up to 300 million olfactory receptors in their noses, compared to the mere 6 million olfactory receptors we have. Plus, the part of a dog’s brain that is responsible for decoding smells is 40 times greater than that in our brains. So likely, the biggest part of a dog's memory relies on its ability to store scent, which is advanced to say the least.

In one study done at the University of Padua, called "Discrimination of familiar human faces in dogs" it is revealed that dogs do also rely on facial recognition to identify their masters and family. This particular study even argues that sight is the primary way dogs remember, assuming they have healthy and keen eyes. This study suggests that only if a dog had impaired vision would it rely foremost on their scent.

Until more thorough studies are done, all we can do is speculate and look at the topic of memory on a case-by-case basis. It's likely that if you have a strong bond with your dog, they will remember you even after an extended separation, but our ability to decode the act of "remembering" is only a guess. For example, you dog might bark at you as though you are not familiar upon a prolonged return, but that might not necessarily mean they don't remember you. It could mean they're feeling anxious and confused about your return. All of that said, even though I'm very confident that my dog has the ability to remember people, it's only an inference based on my knowledge of his behavioral patterns and faith in his functioning sense of smell and sight. TL;DR? Chances are that if you bond with a dog and give it a chance to learn the way you smell and look, it won't ever forget you.