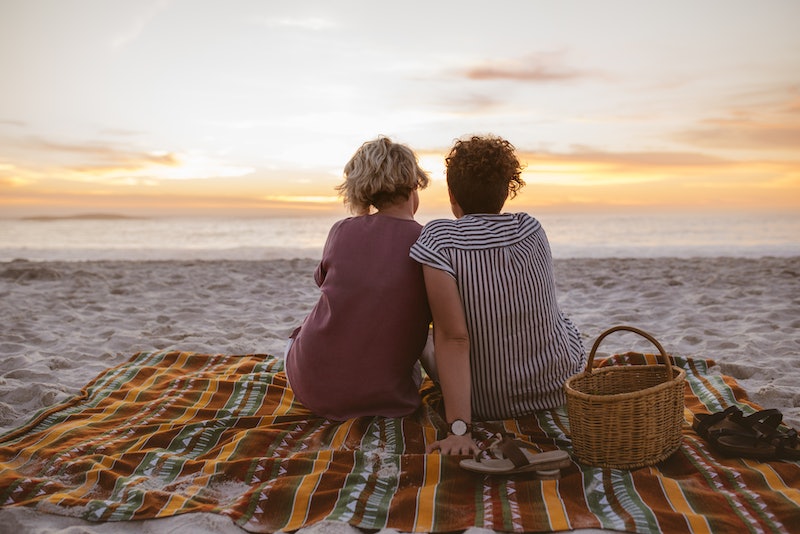 HPV, aka, the human papillomavirus, is considered one of the most commonly contracted STIs. While the HPV vaccine is an effective way to prevent getting the virus, there’s some confusion around if the HPV vaccine works if you’re in a monogamous relationship and sexually active. However, OB/GYNs agree that there are still benefits to getting the shot after taking your relationship status that extra step, if you haven't already gotten it.

According to the Cleveland Clinic, there are around 100 types of HPV (yes, you read that right) that impact different areas of the body, and that there are around 30 strains that specifically affect your genitals. What’s more, they report there are 14 types that are considered “high risk,” meaning, they may increase your chance of developing cervical cancer — with types 16 and 18 causing 70% of all cervical cancers and pre-cancerous lesions. Some strains of HPV may cause genital warts, but a majority of the time, the virus is rarely accompanied by symptoms.

The American Sexual Health Association estimates 79 million people in the U.S. are currently infected with HPV, and 14 million people contract the virus every year. “Nearly all sexually active men and women have been exposed to some strain of the HPV virus,” Dr. Stephanie McClellan, an OB/GYN and the chief medical officer of the Tia Clinic, tells Bustle.

While this may sound frightening, the CDC reports most kinds of HPV clear on their own without causing additional health risks, or developing into cervical cancer. However, this doesn’t mean the HPV vaccine is pointless if you are already getting down and dirty. “Ideally, vaccines work best in a naive population, before there is any type of sexual exposure. That said, the [HPV] vaccine would be protective against strains that you have not been exposed to,” Dr. McClellan explains. “Many clinicians will recommend the vaccine even if you are sexually active, because there are many strands in the vaccine, some of which you may not have been exposed to already.”

According to Dr. McClellan, the shot boast benefits even if you are in a monogamous relationship: "Even if you had not engaged in any previous intimate activity that could have resulted in viral exposure, [...] but your partner had engaged in previous sexual activity, you are at a risk of encountering the virus, and the vaccine still matters," she says. "It is not monogamy in a current relationship, it is your exposure across your entire sexually active life that determines your risk of encountering the virus."

The only case the HPV vaccine would become not important, Dr. McClellan explains, is if both you and your partner had never been sexually active before and will never have other partners — a situation that is unrealistic for many of us. Otherwise, the shot has the potential to shield both you and your partner from contracting different types of HPV the other may carry. While routine screenings can reveal if someone has HPV, most people don't know they're infected since it's asymptomatic — which means that, while you should have a conversation with your partner if you do test positive for HPV, it doesn't necessarily mean they hid a diagnosis from you or cheated.

Further, in 2006, the HPV vaccine (aka, the Gardasil shot) first became available in the U.S., but it only protected against four types of HPV at the time — both types 16 and 18, and the two kinds most likely to cause genital warts. However, Dr. McClellan says that, “The number of strains included in the vaccine was expanded in 2014 to protect against 5 additional high-risk strains, with type 45 being most significant.” So, while you or your partner may have received the original HPV vaccine when you were younger, your physician will likely recommend you both get the newer shot on your next visit to protect you both from strains you may have been exposed to from past sexual partners.

In addition to the shot, OB/GYNs perform regular pap smears to check for abnormal cells, genital HPV, pre-cancerous lesions and cervical cancer caused by HPV, among other issues. “Today, it continues to be an affordable and effective way to screen and protect [people] from disease progression,” Dr. McClellan says. The Mayo Clinic reports the frequency of a pap smear can depend on your age and past test results — which can include whether or not you’ve previously tested positive for HPV.

Simply put, you’ve probably been exposed to some type of HPV if you, or your partner, had sexual partners before becoming exclusive. However, getting the vaccine may protect you from different strains of the STI that your partner could unknowingly be carrying (or vice versa!), and can keep you healthy in the long run. Next time you’re at the OB/GYN’s office, consider having a discussion about what HPV preventative care looks like for you as a couple — and don’t skip what could be a life-saving vaccine.

More like this
12 Aphrodisiac Desserts To Spice Up Your Valentine’s Day
By Kaitlyn Wylde
10 Primal Movement Exercises That'll Improve Your Mobility
By Carolyn Steber
Here’s What Health Means To People In 2023
By Isabella Biedenharn
How Many Burpees Should You Do Per Day? Here’s What Fitness Trainers Say
By Carolyn Steber
Get Even More From Bustle — Sign Up For The Newsletter
From hair trends to relationship advice, our daily newsletter has everything you need to sound like a person who’s on TikTok, even if you aren’t.