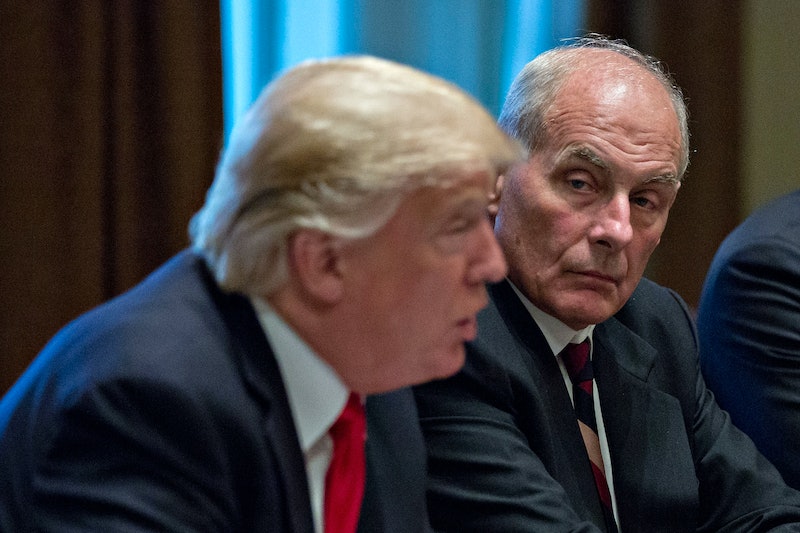 President Trump supposedly has been secretly giving assignments to his staff in the dead of night in order to bypass his own chief of staff, Gen. John Kelly, the Wall Street Journal reported Monday. Like a mischievous preteen hanging out with friends after curfew, the president has reportedly asked these staffers not to tell Kelly about the secret meet-ups, the Journal claimed. Trump's chief of staff was hired to bring order to a chaotic White House; now, Kelly is basically like Trump's dad. In the past, Kelly has denied claims that there was any tension between him and Trump. Bustle has reached out to the White House for comment.

Trump's appointment of Kelly as chief of staff in July was widely seen as an attempt at damage control. At the time, White House aides were bickering with one another, and to the embarrassment of Trump, much of that infighting was publicly reported. By the time Kelly took the wheel as chief of staff, no fewer than 12 White House officials had either resigned or had been fired since Trump's inauguration six months earlier.

Since then, Kelly has regularly been referred to as one of the "adults in the room" in the Trump administration, the other two being Defense Secretary James Mattis and National Security Advisor H.R. McMaster. But Kelly has the most managerial authority over the White House's day-to-functioning, and by all indications, he's approached the job as a stern, disciplinarian father figure trying to keep his kid out of trouble.

Like a dad who won't let his daughter have her own phone line, Kelly requires Trump's personal confidantes (including Ivanka Trump and Jared Kushner) to go through the chief of staff's office first if they want a meeting with the president, according to the Washington Post. He doesn't let staffers wander into the Oval Office without his permission (a shift from his predecessor's policy), and some of Trump's more troublesome friends have been cut off from the president by Kelly entirely. The Post reported in September that Kelly supposedly patrols the White House grounds every night to make sure nothing is amiss and everyone is behaving themselves.

But if the Journal's reporting is accurate, a lot of people in the White House aren't behaving themselves. On the one hand, the Journal reported that on at least one occasion, White House staffers have supposedly disregarded the president's late night instructions (!) and instead deferred to Kelly. On the other hand, some staffers have reportedly passed messages to the president through First Lady Melania Trump in order to circumvent Kelly's restrictions, according to the Journal. "These are more anonymous sources peddling things that just aren’t true," Melania's spokeswoman said, calling the claims "fake news." '"The first lady is focused on her own work in the East Wing."

All of these claims make perfect sense if you view Kelly as the White House dad. His children generally respect his authority and follow the house rules — except when they think the rules are onerous or unfair, in which case the president and his staff may find creative ways to get around dad's restrictions.

Ultimately, however, they all defer to Kelly. Despite frequent reports of tension between Trump and his chief of staff, the president has never soured on Kelly, calling him "one of the finest people I know" in October and reportedly still holding him in very high regard. This may in part be because, despite enormous differences in their demeanors and management styles, Trump and Kelly appear to have similar underlying worldviews on topics about which Trump cares deeply. It's important to note that during his brief time as Homeland Security Secretary, Kelly dutifully and aggressively enforced Trump's hawkish immigration policies without hesitation.

Kelly has called being chief of staff "the hardest job I've ever had." Countless parents have described raising kids in the same way, and that appears to be the role Kelly has assumed in the White House. By all indications, Trump and his staff are perfectly fine with that.

Editor’s Note: This op-ed does not reflect the views of BDG Media and is part of a larger, feminist discourse on today’s political climate.