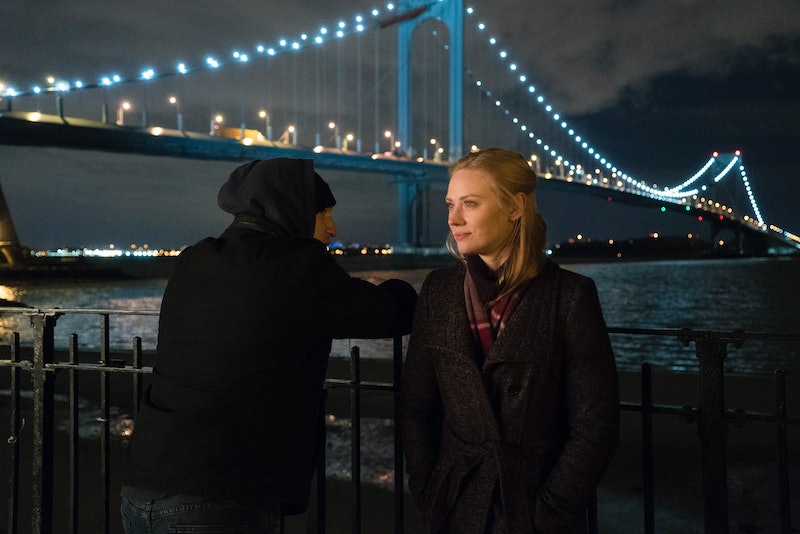 There may be something more than friendship between Karen Page and Frank Castle, and The Punisher Season 1 will bring them back into each other's orbit. The two first came together in Daredevil Season 2, and quickly formed a kinship with each other. Karen Page's (Deborah Ann Woll) relationship with Matt Murdock (Charlie Cox) is in a complicated position after that season and The Defenders, and there is a chance that she and Frank Castle (Jon Bernthal) could end up taking the next step in the new spinoff. An easy way to predict what may happen between the two is to find out if Karen and Frank hook up in the comics.

One of the shining lights of Daredevil Season 2 was the unexpected partnership between Karen Page and Frank Castle. The intrepid journalist and the murderous vigilante don't look like a good fit on paper, but these two formed a strong kinship that made their connected storyline one of the most memorable parts of the second season of the original Netflix Marvel series. Because of this chemistry, the news that Karen would be featured in The Punisher delighted many fans of this particular universe. But there's a chance that a few comic fans were left scratching their head. While Karen and Frank make for great partners in Daredevil, there's little precedent in the comics for these two even being familiar with each other.

While there are original characters in the Netflix Marvel universe, the legacy of some of the existing ones goes back decade, involving complicated backstories and harrowing adventures. Each of the main Defenders comes with hundreds — if not thousands — of different stories to adapt, including crossovers with other heroes and huge multi-crossover events. That's part of the reason why it was so surprising to see Frank and Karen team up. It's a rare instance of the franchise bringing two existing characters together who never met in the source material.

If Karen Page and Frank Castle had been regular associates in the comic book and never hooked up, it would be safe to predict that they'd carry that relationship into The Punisher series. However, since the two have no comic book history together at all, their possible romantic relationship is truly uncharted territory. While their friendship is a creation of the show, it isn't the first divergence from the comics that the TV adaptation has taken, especially when it comes to Karen Page.

In the comics, Karen Page is introduced as Daredevil's secretary but eventually becomes addicted to heroin, sells out Daredevil's identity in exchange for drugs to fuel her addiction, is tricked into thinking she's contracted the AIDS Virus, and is murdered by Kingpin. Karen Page's arc in the comic books is renowned as a classic example of "fridging," a tired trope in comic books where a superhero's female love interest is needlessly tortured, harmed, or killed to spur male heroism.

The Karen Page of Netflix's Daredevil and The Punisher does not suffer needlessly like her comic book counterpart does, and doesn't exist exclusively to inspire others to seek revenge. Instead, Karen Page and Frank Castle are close to equals — both people fighting for justice through very different means. There is no precedent in the comic books of Frank and Karen becoming romantic partners, but there is for Karen growing further as a capable, confident, and independent character.

The Punisher bears a strong resemblance to his comic counterpart, but because Karen has been revamped and revitalized, there's no telling what will happen between the two when they meet again. The unpredictable nature of Karen — and her complicated, high-stakes relationship with Frank — is just one of many exciting things to look forward to when The Punisher premieres on Netflix on Nov. 17.