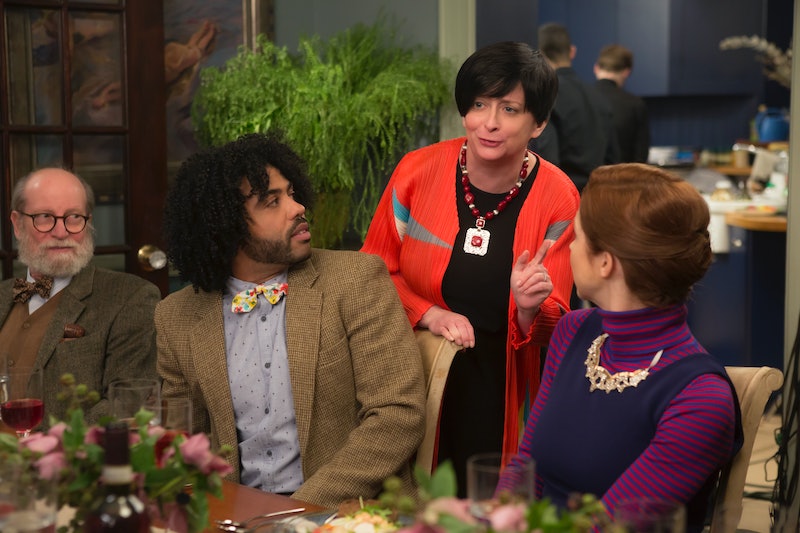 Eric Liebowitz/Netflix
By Mallory Carra
May 19, 2017

SPOILERS AHEAD for Unbreakable Kimmy Schmidt Season 3, which is now streaming. In the third season, the title character will be experiencing some more firsts: first divorce, first semester of college, and first college love interest in Perry (played by Daveed Diggs). But do Kimmy and Perry Date on Kimmy Schmidt? The New York Post's Page Six reported that Perry is indeed a love interest for Kimmy, but it's not an easy path to romance for these two characters throughout the season.

Kimmy and Perry first meet in the second episode as Kimmy tours community colleges. They have great chemistry together and Perry proudly tells her that he worked very hard at Robert Moses College in order to earn transfer admission to Columbia University. Later in the season, Kimmy stumbles upon impressing the crew varsity coach at Columbia and lands a full scholarship to the Ivy League school. When Kimmy and Perry encounter each other on Columbia's campus, Kimmy asks him to hang out, but he's put off by her sudden scholarship and admission to the university, which he worked hard to obtain for himself.

Throughout a night out, Kimmy keeps running into Perry at his on-campus jobs at the bookstore and the shuttle. Perry and Kimmy bond over how young and inexperienced the other students are and they share a kiss when he drives her back home. After they kiss, Perry confesses to her that he's also been going to divinity school to become (gulp) a reverend. Due to her traumatic experience with Rev. Richard Wayne Gary Wayne, Kimmy has a negative reaction and tells Perry that she never wants to see him again. "It's hard enough for me to trust people, especially men," Kimmy tells Titus in the seventh episode, making it clear this relationship will start off being held up by her trust issues stemming from her time in captivity.

It takes a storm called Tammi-With-An-I and a trip to a Black Church with Titus on Good Friday to teach her that some bunkers can be good things — and thus, not all reverends are evil men. Some reverends can be women and good people, like Perry. In the eleventh episode, Kimmy apologizes to Perry, who forgives her, and they spend time together at a Columbia professor's student soiree, where he admits he has googled her and knows about her "mole woman" past. After learning about internet humiliation, Kimmy helps save Perry's "philosophy rap" in class, which other students are recording with their phones.

But by the season finale, Kimmy leaves Columbia (with an honorary degree meant for Jimmy Smits) gets a job at a startup founded by a fellow Columbia grad. Fans will have to wait until Season 4 to see if Kimmy and Perry will pursue their interest in each other or if they'll ever bump into each other again off-campus.