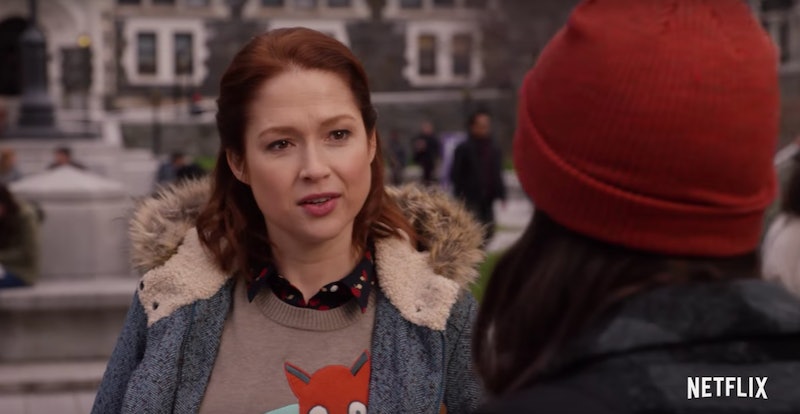 If you feasted your eyeballs on the TV appetizer that is the Unbreakable Kimmy Schmidt Season 3 trailer, then you're probably obsessed with two things. One, that Hamilton dreamboat Daveed Diggs is starring in this season. And, two, our plucky protagonist is headed to get some higher education, because "after high school, most white girls go to college." This is exciting beyond the obvious opportunities for things to go hilariously wrong — wonderfully summarized by the titular redhead running into her former babysitting charge, Xanthippe Voorhees, on campus (presumably she's studying at the same place). No, the real joy of the show so far has been its focus on gentrification and the effect this has on the people who've been in New York City for decades.

Given the expense of college for those who aren't granted financial aid, and the show's previous focus on the extremely privileged, I'm going to go ahead and assume we'll get a whole helping of class-based comedy. Besides which, if Kimmy is running into Jacqueline White's step-daughter on campus, presumably it's a school for those with a little extra dollars to spare.

But this isn't as dull and worthy as it sounds. In Season 1 and Season 2 Kimmy Schmidt episodes, the show's gentrification-based moments have been the same moments the comedy is at its sharpest.

On top of that, it adds more nuance to the dynamic we've been enjoying. Generally, Kimmy has always been on the side of good, but, as a student, she might find herself unwittingly joining in with gentrification. As a student in Boston stated in The Guardian in 2016:

"We are not permanent residents, we have the means to pay for high rents and we’re willing to live in squalid conditions. We are students, and we are ruining the lives of Boston residents."

Of course, so far we don't know how Kimmy is funding college, though I'm guessing her status as a famous ex-cult member has something to do with it. If she does have a generous benefactor, there's every chance that this person would be footing the costs of her rent as well as her tuition fees. Here's hoping she stays living with Lillian, so her impact on New York's real estate scene would be minimal. But gentrification isn't just about where a student lives during their time at university, but after, too.

According to The Washington Post, in 2011 a college graduate could expect to earn approximately 73 percent more than a worker with only a high-school diploma. And, according to Stanford economist Rebecca Diamond, this is resulting in a geographic divide, with college graduates being able to live in "high-cost cities like New York or San Francisco," with all the variety of cuisine and schools and culture offered at such places.

The show, to some extent, pooh-poohs this notion. After all, Lillian Kaushtupper, a part time drug dealer, still manages to just about afford to live there. As does Titus, who attempts and mostly fails to work in that least lucrative profession: the performing arts. But if Netflix's quirkiest show wants to stay true to its quietly political undertones, then the upcoming series will use Kimmy to explore the tension between the options open to people depending on if they've graduated from high school or from college, too.

Here's hoping that this is the most politicized season yet. After all, it'd be a crying shame if the show wasn't as smart and sly about the education system as it is about pretty much everything else.