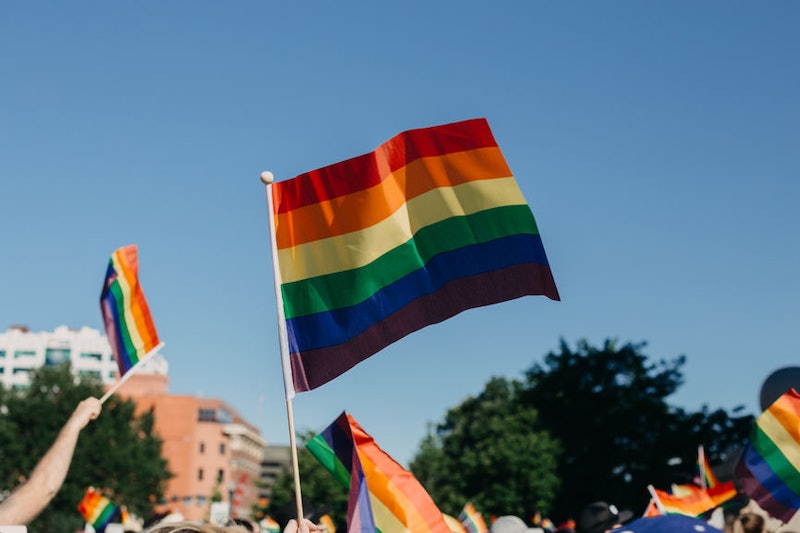 Pride Month is here, marking a time to celebrate all the wonderful identities under the LGBTQIA+ umbrella. But with celebration should come awareness, and that means a good hard look at the legal issues still faced by marginalised individuals. While the UK is toward the top of the list in terms of equality legislation, there are still quite a few problems that need to be resolved. A big one is that some LGBTQIA+ laws differ throughout the UK.

The UK has rarely been consistent when it comes to empowering the LGBTQIA+ community. For example, sex between two men over the age of 21 and "in private" was decriminalised in England and Wales in 1967, reports the BBC. In Scotland, it took another 13 years for the same legislation to be introduced. And Northern Ireland didn't legalise it until 1982.

This inconsistency unfortunately still exists now. While England, Scotland, and Wales (also known as Great Britain) now tend to implement legislation at the same time, Northern Ireland still lags behind in some areas. Take same-sex marriage. In 2013, England and Wales legalised the act to much applause. The same happened in Scotland a year later. But in Northern Ireland, it is still only civil partnerships that are recognised. The country also only allowed same sex couples to adopt in 2013, reports the BBC; a law that was introduced in England and Wales in 2005 and Scotland in 2009.

As the Guardian states, same-sex marriage in Northern Ireland is a devolved issue. This means that it is the responsibility of the Northern Irish Assembly (otherwise known as Stormont). But Stormont has not been functional since the beginning of 2017. The UK government promised to use its power to advance the rights of the community in Northern Ireland, but, according to Channel 4, the Northern Ireland Office has only spent just over £300 on the cause.

Recently, a protest calling for marriage equality took over Belfast, reports ITV News. One speaker addressed the UK government, saying: "Your kind words are no longer welcome — we judge you on your actions."

However, this only applies to Great Britain (England, Scotland, and Wales) as matters of equal opportunities and discrimination in Northern Ireland were transferred to be the responsibility of the country's Parliament, Stormont. As previously explained, this has been suspended for over two years. Talks to reignite it don't appear to be making much progress.

Northern Ireland isn't the only country that has been criticised when it comes to LGBTQIA+ legislation. Transgender people living in any part of the UK who wish to change the legal gender stated on their birth certificate must obtain a Gender Recognition Certificate (GRC). As Amnesty reports, under the Gender Recognition Act 2004, this requires several outdated things: a formal diagnosis of gender dysphoria, evidence that you have lived in your "acquired gender" for at least two years, and proof that you intend to live as that gender for the remainder of your life.

The law also only allows people over the age of 18 to apply, doesn't give any provision for those who identify as non-binary or intersex, and allows a spouse to overrule the entire process. In late 2018, the government launched a consultation to review the act in England and Wales. Scotland launched a similar one in November 2017. Responses are yet to be published. Once again, trans people in Northern Ireland face even greater discrimination. Those who wish to apply for a GRC there must be unmarried and not in a civil partnership before receiving a full certificate.

Education issues also plague the community, but there have been some promising moves made by the government. As Vice reported in May 2018, Wales announced that, from 2022, all schools will be required to teach LGBT-inclusive Relationships and Sexuality Education (RSE). And in November 2018, Scotland became the first country in the world to embed LGBTI rights into the curriculum, reports the Guardian. This included history lessons on equalities and movements as well as teachings on issues of homophobia and transphobia. Crucially, no school or teacher is allowed to opt out.

England was slightly further behind, only updating its policy in April 2019. As Stonewall reports, from September 2020, all primary schools will be required to teach about different families. However, as the BBC notes, they are only "encouraged" to cover LGBTQ+ issues with headteachers still having the power "to decide exactly what to teach and when." However, in secondary schools, lessons on sexual orientation and gender identity are to be made compulsory.

Protests opposing the change in England quickly ensued, reports the BBC. These started in Birmingham and are mainly being made by religious individuals who believe inclusive education "contradicts [their] moral values." Some children have even been taken out of school.

It's disheartening to see such a reaction to a necessary step forward and further proof of just how important education is. Stonewall's 2017 school report found that nearly half of all LGBT students were bullied for their identity in secondary school. Teaching people — young and old — about every identity that exists in the world is therefore a huge priority for a government that wants to call itself inclusive. So is ensuring that every person's human rights are upheld.

As the above shows, there is still some way to go before that vision becomes reality.