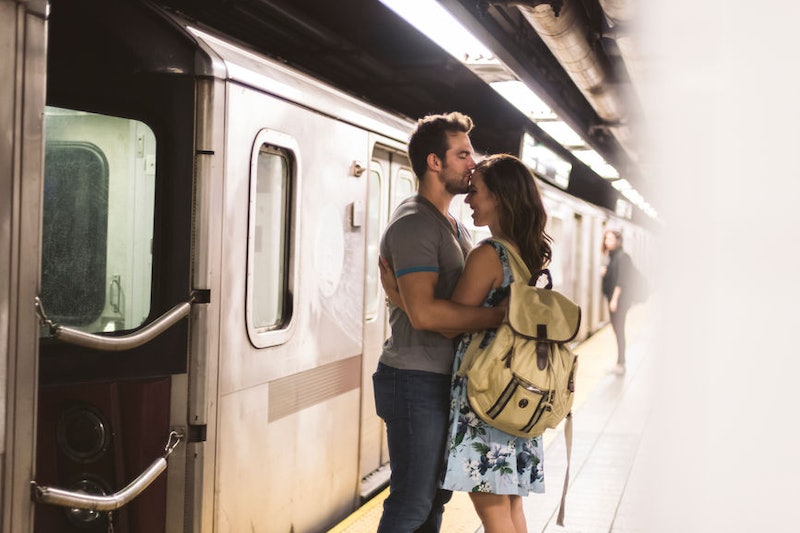 While some would see miles of separation as a deal breaker, there are ways to turn it into a positive. As dating and relationship coach Sami Wunder explains: “Long distance relationships can be more of a test on your relationship than when you're dating someone who lives nearby, but that doesn't need to be a negative thing.” She continues:

“You can use it to strengthen your relationship because you're both putting in that extra effort. As long as you continue to make the relationship a priority whilst you enjoy your life apart, it'll flourish.”

Holly met her husband online when she was 16. They bonded over a shared love of the same metal band. However, there was one slight inconvenience" she lived in Surrey in the UK and he lived near Philadelphia in the U.S.

“We dated long distance for nearly five years while I went off to university, seeing each other two or three times a year," she tells me "It was definitely rough, especially with the time difference." But the pair made it work and, in 2012, on one of her trips to see him, they got engaged. Since then, Holly has moved to be with her partner, and they've bought a house together. She says:

"Doing long distance is worth it if you’re willing to put in the effort. No one knew me as 'Mark’s girlfriend' at uni, I was able to just be myself and figure out who that really was. I think that helped enormously when the time came for me to move my entire life across the Atlantic.”

Jonathan has also been in a long distance relationship for two years, living on the other side of the U.S. to his boyfriend who he met on Tinder. "We are getting better at finding the balance," he says. "It’s easy to compare your relationship to others, especially during the holidays, and being in an LGBT relationship, but I remind myself that I believe in what I have and it’s my own special relationship."

Similarly, Abi met her boyfriend at college and they made things official just before they left for university over 150 miles away from each other. She says, “It was hard, particularly when you're at uni and you're hungover and just want to see your favourite person! We found it really hard to judge how often to see each other for the weeks we were home for the holidays.” Regular phone calls and having a date in the diary for their next meeting became crucial for Abi. She says, “You have to have loads of trust and communication between each other.”

Long distance relationships can pose a series of emotional and financial hurdles but there are ways to get around this. We-Vibe’s Relationship Expert psychologist Dr Becky Spelman says, "The most important thing is to ensure that you are expecting the same things from the relationship. Some long distance relationships are exclusive, for example, while others are open. Either is fine, so long as both parties agree and accept the situation.” She continues: “Work to maintain an honest, frank dialogue, and be prepared to be flexible as your respective circumstances change.”

It’d be easy to assume that the difficulty in a long distance relationship comes from being apart but, for Natasha and her ex, it was the coming together that was harder. “Every two or three weekends, he would come to me or I would go to him. It was a lot of fun. We’d have a full weekend of date days and nights which kept it exciting,” she says. “The hard part was moving to the same city when we realised we didn’t get along as well as we thought we did! We argued a lot.” Natasha's experience proves there's no one-size-fits-all formula to long distance.

Where long distance is the making of some, it’s the breaking of others. If you’re thinking of embarking on a long distance relationship, Hilda Burke, psychotherapist, couples counsellor and author of The Phone Addiction Workbook, says, "Live your life as fully as you can where you are and try to be in the moment. Wishing the time away and putting your life on hold until you next see your beloved will only lead to resentment."

So, it seems that the most important thing in maintaining a long distance is your attitude to the situation, and your ability to enjoy your life both apart and together.