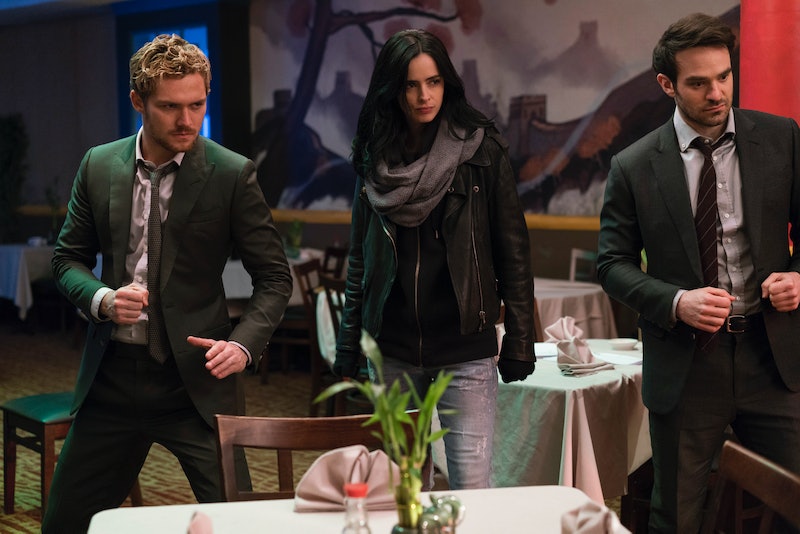 For the most part, Marvel's television series have been compliant to comic book canon, but in The Defenders, there could be a few changes to these established characters and how they interact with one another. While the Aug. 18 premiere of The Defenders will bring the Devil of Hell's Kitchen and the alcoholic PI together for the first time on TV, Matt and Jessica's relationship in Marvel comics isn't much of a relationship at all. The two have never hooked up before, nor have they had any other meaningful connection.

That history makes Krysten Ritter's comments to Entertainment Weekly suggesting that Jessica and Matt will clash in The Defenders very interesting. They could also hint that things will get a little steamy between the two heroes when they start working on the same team. In their early report from The Defenders set, Entertainment Weekly reported that, Ritter had shot most of her scenes to that point with Daredevil actor Charlie Cox. She described their relationship as having a "cat-and-mouse" quality.

Both of these characters are, however unwillingly, working together to save New York City from the deluge of villains in and around the Hell's Kitchen area in The Defenders. But their methods could not be more different. Law school trained and intensely disciplined Matt could easily despise the barely functional mess that is Jessica Jones, and vice versa.

"No one’s best friends in all of the Defenders," Ritter told EW in the same story. "This is a reluctant team-up." Marvel seems pretty enthusiastic about the idea that Jones and Murdock just won't be able to get along — even the shows' official Twitter accounts are constantly bickering.

But even bickering is new ground for these two characters. In the comics, Jessica Jones and Matt Murdock's biggest connection came about when Jessica became Matt's bodyguard for a handful of Daredevil issues. In The Defenders, it seems that they'll be constantly at odds... but is it possible that they'll find that they have some romantic chemistry underneath that?

"I think both Jessica Jones and Matt Murdock are quite... opinionated and quite stubborn," Cox said in EW's behind-the-scenes video. I imagine that would be kind of a fiery relationship... in a good way. His description sounds a lot like the way Luke and Jessica's relationship got started back in Jessica Jones Season 1, which could be a sign of impending fireworks.

Speaking of, Jessica's comic-canonical love interest is Luke Cage, which is probably why the two hooked up and even started dating during her solo show. But after Jessica revealed that she was partially responsible for the death of Luke's wife while under the influence of Kilgrave, they had a pretty unconventional breakup. As of his own spinoff show, Luke Cage is now balancing his flirtatious friendship with Misty Knight and his ongoing relationship with Claire. In New Avengers issue "Happily Ever After," Jessica marries Luke Cage, but that doesn't really seem like something TV Jessica is ready to do. Even if that's where they eventually headed, it doesn't rule out a fling with Matt.

The comics don't set a romantic path for this prospective couple. So if Matt and Jessica form a relationship of any kind in The Defenders, it will break new ground for the pair.