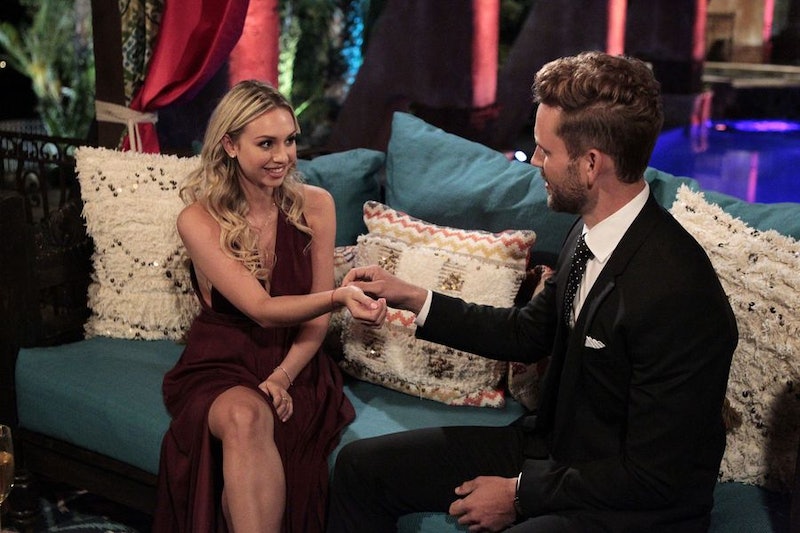 If The Bachelor hasn't been juicy enough for you this season, that may all be about to change. In a promo for next week's episode, it seems like Nick and Corinne are getting pretty cozy... Don't get me wrong — they've gotten pretty close earlier this season, especially when moon bounces and trench coats have been involved. And now, it looks like things are getting pretty serious while everyone's in St. Thomas, too. Do Nick and Corinne have sex on The Bachelor, or is it just fancy editing? It's hard to tell from the promo alone, but it looks like they'll be getting pretty close.

In the clip, all you can see is Corinne getting her extra private time with Nick before leading him into what looks like a hotel room. Her famous "platinum vagine" quote was even involved, which I've been looking forward to for basically this entire season so far. It seems like the preview is heavily insinuating that they do sleep together. However, as any fan of this franchise knows, producers will pretty often lead us astray in clips for future episodes, so just seeing it in the promo isn't really a guarantee that it plays out that way.

Whether Nick and Corinne have sex isn't really anyone's business except for Nick and Corinne's, even if it's impossible not to be at least a little bit curious about what's going down next week.

The good news? Monday will be here before you know it, so we'll have our answers soon enough. Now that Nick's down to six women, things are getting serious... and apparently, that means they're getting even more serious with Corinne. I can't wait to see what happens!