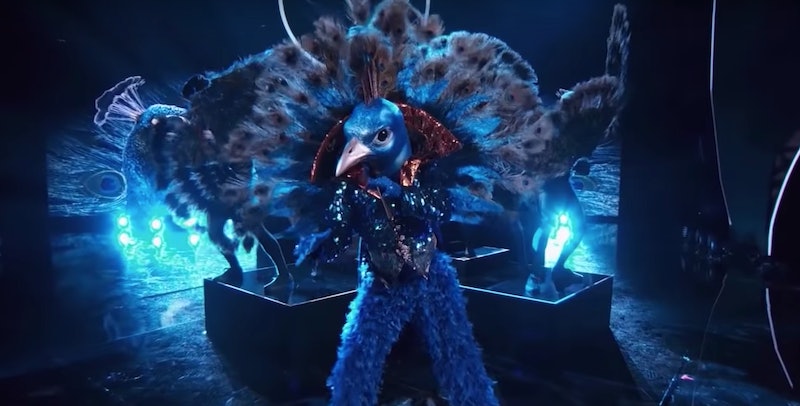 Fox's new competition show, The Masked Singer, is exactly what it sounds like. Each week, a bunch of celebrities put on their chosen costumes and perform a song, leaving the audience (and the show's panel of judges) to guess who they are. And considering we can't always see their mouths, it's just as big a mystery if The Masked singer contestants sing live.

While most singing competitions are dependent on the performer's ability to deliver a good vocal performance in front of an audience, many of the Masked Singer stars aren't professionals. According to the show's official site, contestants range from "Grammy Award winners to legendary athletes and everything in between."

Obviously, we know it is the real person singing, otherwise that would defeat the purpose of guessing whose voice it is, but it's possible it's pre-recorded. After all, lip-syncing is a lot easier when your entire face is being obscured by a giant monster outfit. According to Inquisitr, series host Nick Cannon said during a January episode of The Talk that he couldn't believe producers were able to convince celebs to "sing live in those ridiculous costumes," which seems like confirmation that they are. However, it's easier to make a case for some singers than others.

In the premiere, some of the masked performers' costumes didn't cover their mouths. As such, it seemed pretty clear that the deer and the unicorn were both singing live, or at the very least doing a very convincing job of lip-syncing. The peacock and the lion's mouths were both fully obscured by their masks, but the masks themselves seemed to have a mesh material in front of the singer's faces that allowed their voices to carry through — which is helped by the fact that they're both clearly professional singers.

Of all of night one's performers, the monster and the hippo seem most likely to have been lip-syncing. The hippo (who was later revealed to be NFL player Antonio Brown) had a costume that jutted out near his mouth area and left a gap underneath, which would've made it easier for him to project his real singing voice live. The monster, on the other hand, was holding a retro microphone that was different from the wireless mics the rest of the contestants were using. The monster also seemed to have the most obtrusive mask, though it was bulky enough that the performer, who sounds like they have a professionally-trained voice, could have been singing into a hands-free mic hidden under the fuzzy cyclops head.

Overall, it seems like a strong possibility that the Masked Singer stars are, in fact, singing live, though ultimately it doesn't really matter. The point is that they're using their real voices — for better or for worse — and we're all left guessing who the heck they are. Besides, who cares if they're singing live when there's a giant hippo hopping around to "My Perogative"? Either way, this is entertainment gold — even if it is the most ridiculous thing on TV right now.