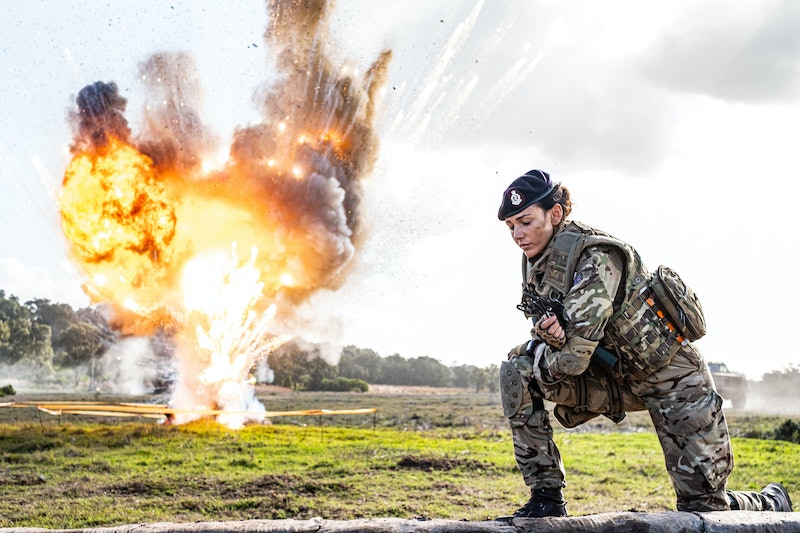 Our Girl returns to BBC One for the fourth series and final season that will star Michelle Keegan as Georgie Lane. There’s little surprise why the show has built up such a loyal fan following, with incredibly tense action scenes and super loveable characters it’s easy to get engrossed. Series four has all the action of the episodes that have gone before it but it may leave viewers wondering, do the actors do their own stunts in Our Girl? Military life is physically demanding and the cast got a little taste of what it’s like to be on the frontline while filming.

Well, it turns out that Michelle Keegan and her co-stars do indeed perform their own stunts. Rather than using doubles and clever camerawork, the cast are taught how to carry their equipment and film their own action scenes. Speaking at a screening of season four's first episode back in early March, Keegan explained that this series was incredibly challenging, not only emotionally but physically.

Referring to a stunt in the first episode in which her car flips over, she said, “It felt like we were upside down forever ... I remember every single time I couldn’t undo my belt and I’d just give Rolan [Bell, who plays Sergeant King] a panicked look and he’d have to do it for me.” Sounds pretty terrifying to me.

At the screening, series creator and writer Tony Grounds explained that, in preparation for filming, the cast receives bootcamp-style training to get them ready for their roles and filming. The cast from series four trained for a week before filming. "We have military advisors on set at all times," Grounds said. And Bell added, “We get a lot of stories explaining things that have actually happened from our military advisor and that really helps us get into the zone of it and understand how serious and traumatic these situations can be. That’s a big part of it as well.”

While the show is not based on true life per se, the team drew a lot of inspiration from IRL events. This meant that props like the military bergans were as heavy as they would be in real life. At the screening, Amy-Leigh Hickman, who plays Mimi Saunders in the upcoming series, said, “I was most surprised by how physically demanding it is. You look at a show like this and think ‘they’ll have the light guns’ but no, it’s all really heavy but it does add to the effect.”

More like this
Rupert Grint Just Shared A *Major* Update About Ron Weasley’s Future
By El Hunt
'The Last Of Us' Has Officially Been Renewed For Season 2
By Darshita Goyal
'Boiling Point's TV Sequel Is Set To Deliver A “Rollercoaster Of Emotions”
By Catharina Cheung and Sophie McEvoy
Turns Out George Clooney Is A Huge Fan Of This Classic British Game Show
By El Hunt
Get The Very Best Of Bustle/UK
Sign up for Bustle UK's twice-weekly newsletter, featuring the latest must-watch TV, moving personal stories, and expert advice on the hottest viral buys.