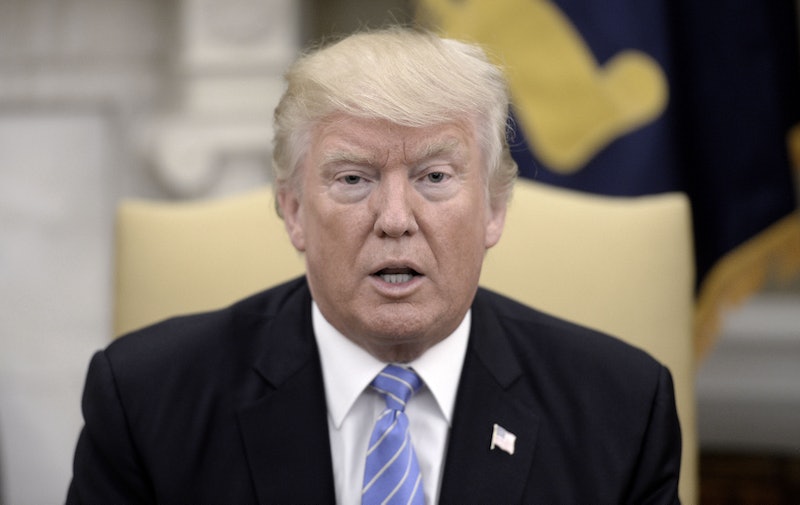 Not long after firing him in May, President Donald Trump tweeted that former FBI Director James "Comey better hope there are no 'tapes' of our conversation," leading many to think he was insinuating there were, in fact, tapes. However, on Thursday, President Trump said he didn't record his talks with Comey.

Trump took to Twitter to talk about the confusion over whether or not he knew if tapes existed, tweeting, "With all of the recently reported electronic surveillance, intercepts, unmasking an illegal leaking of information, I have no idea whether there are 'tapes' or recordings of my conversations with James Comey, but I did not make, and do not have, any such recordings."

Trump's initial tweet about tapes occured after The New York Times published a piece about Comey having dinner with Trump alone in the White House. A the dinner, Trump reportedly asked for loyalty from Comey, who said he would give him honest loyalty. Then it was revealed that Comey wrote memos of his meetings with the president, in which he said that Trump asked him to end the investigation of Michael Flynn's potential ties to Russia.

While testifying before the Senate Intelligence Committee on June 8 about his conversations with Trump and whether he was aware of any tapes that the president mentioned, Comey said, "Lordy, I hope there are tapes."

At a press briefing on Thursday, deputy press secretary Sarah Huckabee Sanders also said she was not aware of recordings of Trump and Comey. Up until Thursday, Trump did not come out and say whether he knew of any tapes or not. Some thought that his tweets hinted that their may be some in existence, but according to ABC News, after Comey's testimony, Trump said at a press conference, "I'll tell you about it over a short period of time. I'm not hinting at anything. You're going to be very disappointed when you hear the answer."

The revelation that there are no tapes came one day before the deadline for Trump's administration to turn over any information about recordings of his meetings with the former FBI director. It also coincided with the Senate Republican's release of their health care bill, the Better Care Reconciliation Act. The pledge to repeal and replace the Affordable Care Act was a key part of Trump's campaign and the House of Representatives passed its own version of the bill in May. Senate Majority leader Mitch McConnell hopes to vote on the bill next week.