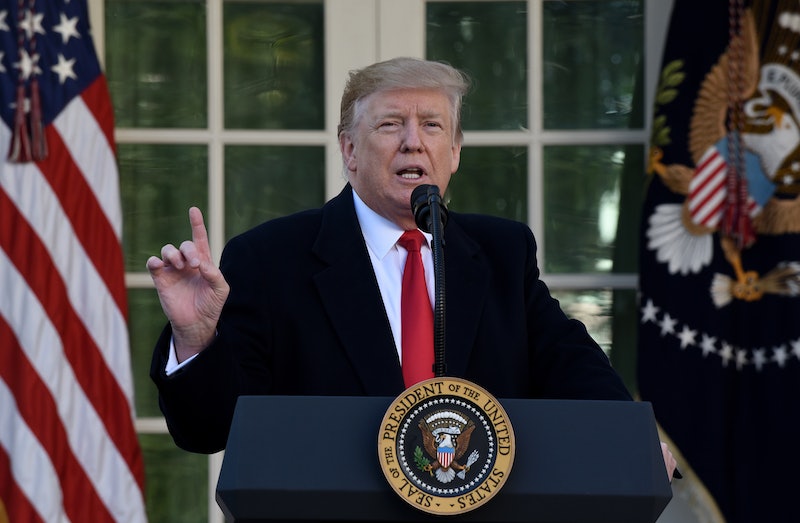 Presidential speeches are important events for TV networks. And with the State of Union address scheduled on Feb. 5, you might be wondering if a network is required to air President Donald Trump's upcoming address or if it has any say in the matter.

It turns out that the answer to the question is actually a lot more complicated than a simple "yes" or "no." On Monday, the White House confirmed that it had accepted House Speaker Nancy Pelosi's invitation to carry the SOTU address on Feb. 5, after weeks of uncertainty about the speech on account of the government shutdown.

Trump wrote to Pelosi, "It is my great honor to accept. We have a great story to tell and yet, great goals to achieve!"

For context, this particular SOTU address is taking place following a government shutdown — the country's longest one yet — over Trump's demand for $5.7 billion in a spending bill for the U.S.-Mexico border wall. (This money was ultimately not included in a short-term spending bill he ultimately signed to reopen the government).

The shutdown itself cost the American economy $6 billion, according to Standard & Poor's (S&P) analysis. It impacted over 800,000 federal workers, temporarily halted immigration hearings and scientific research that required federal funding, left National Parks without adequate staff to help run and clean the sites, and much more.

Given that lawmakers on Capitol Hill have three weeks from Trump signing the short-term spending bill to negotiate on the border wall before another government shutdown happens, it's likely that many Americans may tune in to the SOTU address simply to see what Trump has to say about immigration, federal affairs, and more.

When it comes down to a TV network deciding to air a presidential address, it often depends on the circumstances around said speech. One way to understand this is by remembering the hesitation some networks had over airing Trump's immigration speech from the Oval Office in early January.

The president of CBS-affiliate WUSA, Richard Dyer, who spoke to The Washington Post in early January, shared his thoughts about televising Trump's immigration speech from the Oval Office, and the circumstances that led to major networks eventually agreeing to broadcast the address.

"Of course, the fact that the shutdown is directly affecting a large portion of our audience makes it very newsworthy and appropriate for us to provide," Dyer said, adding that "even though we’re in D.C. we do not air every available President Trump press event. We make a choice based on the news value for our audiences."

In other words, it is a network's prerogative to go forward with airing a presidential speech or not, according to CNN's media correspondent Brian Stelter. In 2014, networks like ABC, NBC, and CBS did not air Barack Obama's immigration speech. It seems like the issue of TV networks airing such content varies case by case.

In Trump's case, however, some have strongly argued in favor of networks live fact-checking the president so as to avoid sending unsubstantiated statements across America.