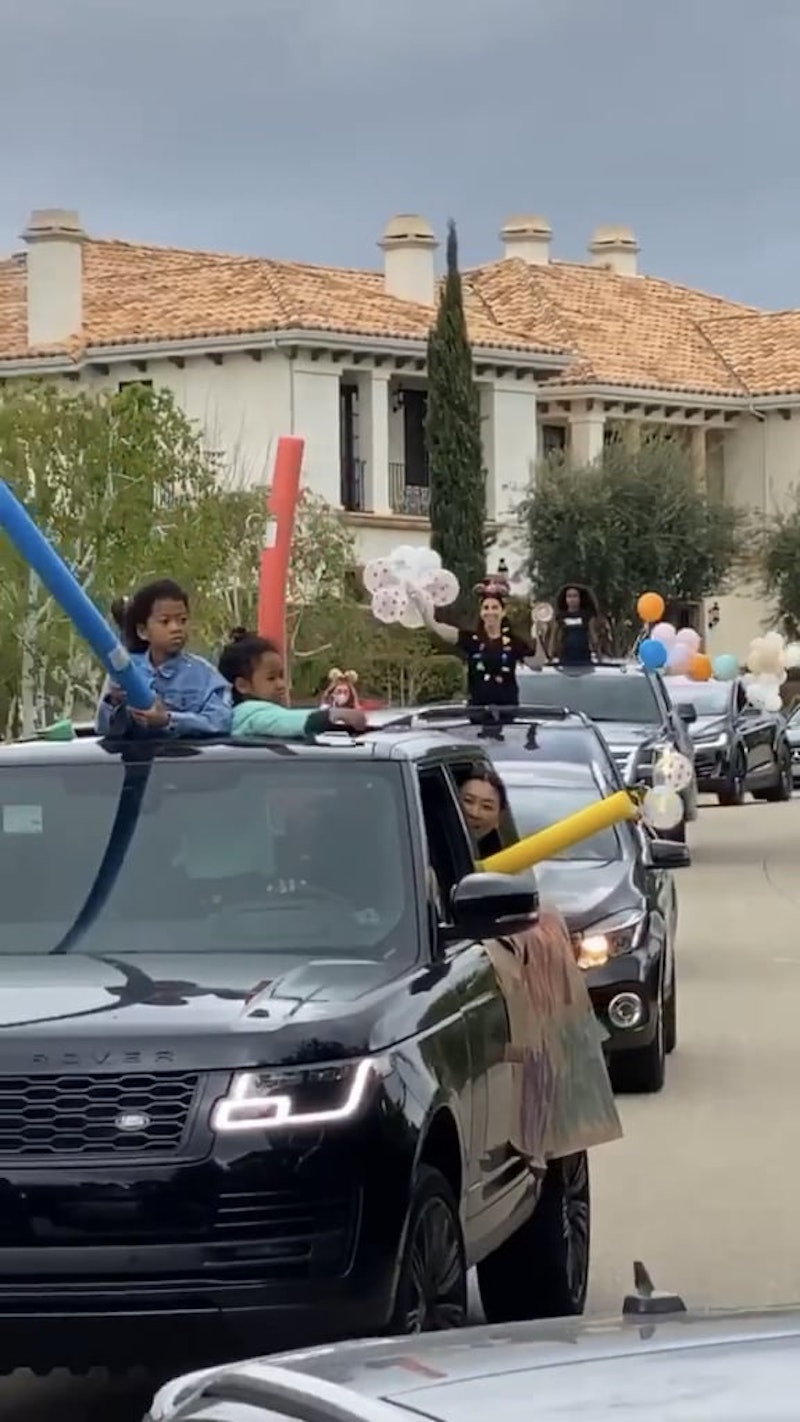 If the Kardashians can't celebrate a birthday by renting out an entire Las Vegas nightclub and blowing out candles on a cake the size of Mars, will hell freeze over? As it turns out, their consolation party consists of covering their BMWs in streamers and throwing a car birthday parade. That's what went down in Calabasas on April 18 to mark Kourtney Kardashian's 41st birthday. She and her daughter, Penelope, watched from their front yard as friends and family honked and waved from the safety of their Range Rovers. And it was, admittedly, pretty cute — albeit loud.

But I still have one question: Do we really need birthday parades? There are so many other ways to create a sense of normalcy while continuing to practice social distancing, like celebrating with friends over Zoom or having food delivered to their doors. And while I understand birthdays are meant to be more special than your average day, leaving the house and driving around like you're sponsored by Macy's doesn't necessarily scream "practicality" to me.

A parade can easily promote the idea of 'one-upmanship' and a sense that you need to 'keep up with the Joneses.'

Leesa Zelken, a professional party planner, isn't the biggest fan either. She's been organizing "Zoomebrations" and virtual visits because a parade can easily promote the idea of "one-upmanship" and a sense that you need to "keep up with the Joneses," especially when celebrities start getting involved. Before long, it may no longer feel like enough to call a friend on their birthday or gather a group on FaceTime. Instead, people will feel obligated to spray-paint their car windows, craft posters, and hang streamers.

And, not to be a Debby Downer, but what about the issue of disturbing the neighbors, clogging up traffic, and even putting people in danger? It can be all too easy to forget about social distancing when caught up in the moment, Zelken says, at which point someone might lean in for a hug or run-up to a relative. And if little kids are involved, it'll be extra important to make sure they stay out of the street.

Outside of Zoom, Google Hangouts, and FaceTime, it was my first time having a real, in-person interaction, which, as an extrovert, I crave.

But for some, birthday parades are 100% worth it. Melissa, 34, has already participated in three birthday parades since quarantine began and has loved every single one of them. "Outside of Zoom, Google Hangouts, and FaceTime, it was my first time having real, in-person interaction which, as an extrovert, I crave," she tells Bustle. "It not only made the person whose birthday it was happy, it actually brightened my day as well. We had a meeting point where we all gathered and then from there drove by their house."

Mikki, 43, agrees with Melissa's assessment. The recipient of a surprise birthday parade herself, she tells Bustle that loads of family and friends drove by her house with balloons, just to brighten up a day that could have otherwise felt forgotten.

"It probably took a total of 15 minutes of my life and really made someone’s birthday," Melissa says.