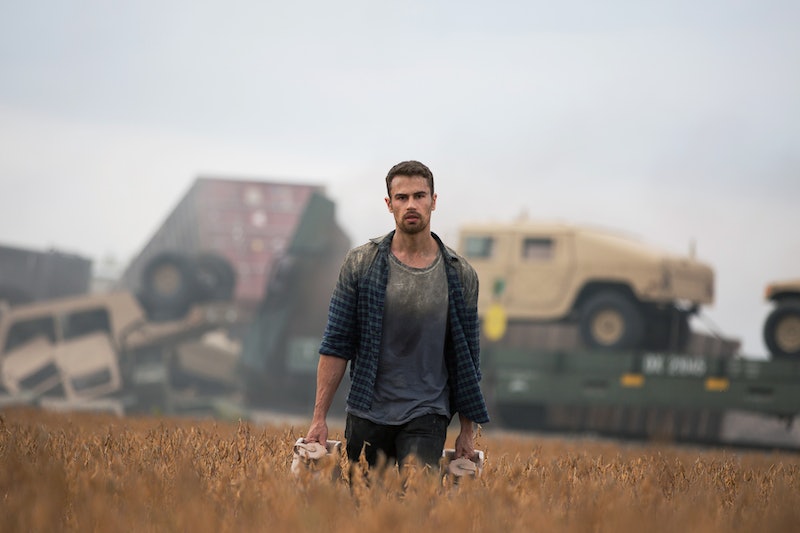 Spoilers ahead. For a film with a title that deals with endings, the finale of How it Ends is surprisingly vague. Netflix's new action thriller follows Will (Theo James) and Tom (Forest Whitaker) as they road trip across the country to save their wife and daughter, respectively, from a mysterious apocalyptic event as it sweeps the nation. On their journey, they encounter everything from a lack of basic resources to a shortage in human decency as every character clings to his or her own survival. In the end, Will and Samantha (Kat Graham) reunite and vow to never leave each other's sides again — but the apocalypse still looms. So the question on everyone's minds remains: do Will and Samantha survive in How it Ends?

Considering that the entire film seems to prove that no matter what you overcome, more and more misfortune can find you, is a clear-cut happy ending really out of the question? Apparently. Because if audiences are craving resolution, the final shot in How it Ends is downright dissatisfying. As a wall of foreboding clouds and fires tail Will and Samantha's car with Will promising that, "no matter what happens, we’re going to make it, OK?" Somehow between the epic music and final "I love you's," escape may not be inevitable for the pair, and fans are not indeed OK.

As tragic an ending as it would be to have Will fight his way to Samantha (and their unborn child) over the entire course of the movie only to get enveloped by the darkness in the end, is there a realistic way the young couple is surviving "end times"? Food, gas and water are dwindling while the source of the apocalypse is never fully discovered. A solution to disaster isn't looking promising.

Besides, nearly every other character falls prey to the direct or indirect effects of the crisis. Samantha's father Tom's health begins to fail right after mending fences with his son-in-law. The seemingly most tough character in the movie, Ricki (Grace Dove), the mechanic who helps Will and Tom on their road trip, questions everything and abandons the group right after saving everyone's lives. Even Will and Samantha are faced with an ambiguous neighbor, Jeremiah, who threatens their safety right after they find each other.

Noticing a pattern? Perhaps the strange symmetry in How It Ends lies with tragedy after triumph. That often when it comes to dark events nothing makes sense about them. In fact, the apocalypse begins after Will and Samantha find out the sex of their baby. The movie seems to be telling a hard truth about how at any moment, even in supposedly safe circumstances, heartache can strike. (And you thought action movies were an effective escape from reality).

Though the film's themes point to an uphill battle to happiness for the central couple, optimists can certainly turn a blind eye. By making the two characters' final words an enduring commitment to one another, perhaps the movie's main message is that true love prevails... even against apocalyptic situations that are mere feet away. It's a sweet message, if an ultimately frustrating cliffhanger that could be paving the way for a sequel in which the couple has to raise a family under unimaginable strain. It wouldn't be the first time a film had a non-ending in order to launch a franchise, as fans of many superhero and action movies know.

Whatever side of the conclusion argument you fall on, there is plenty in the movie to dissect. Whether you're a realist frantically revising your own in-case-of-apocalypse plans or a romantic with visions of Will and Samantha's future family, How It Ends delivers an ending many will not stop thinking about.