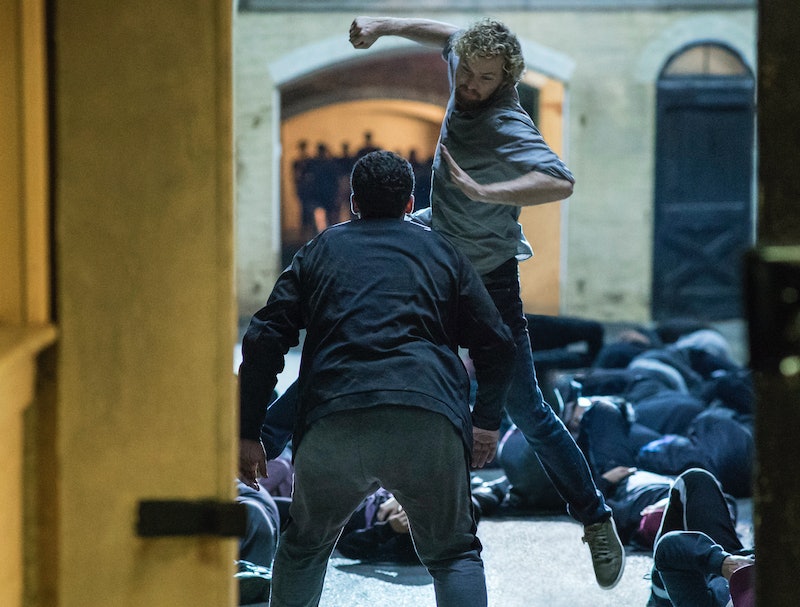 From the beginning, Marvel's Netflix Universe was modeled to take after the successful Marvel Cinematic Universe franchise. Marvel's formula has worked well at the box office, setting up multiple heroes through their own movies before bringing them together in the superstar blockbuster The Avengers. And Netflix seeks to be doing the same, dropping solo series for Luke Cage, Daredevil, Jessica Jones, and Iron Fist in advance of teaming those characters up in the upcoming Marvel crossover series The Defenders. But after reading some negative reviews of the newest standalone series, those looking to make the most of their marathoning time might be reconsidering whether or not they have to watch Iron Fist before The Defenders.

While the lead-up to The Avengers only involves watching five movies, the lead-up to The Defenders involves watching five seasons of television comprised of 13 episodes each — that's about 65 hours of television. That much of a time commitment is no big deal when the shows are consistently good, but with Iron Fist sitting at a Rotten Tomatoes score of just 18 percent, watching the show might not be a good use of time.

But will The Defenders still work without seeing the origin story of Danny Rand? Or will anyone walking into the superhero team-up miniseries without seeing Iron Fist be completely lost? While a completist may argue that you have to see every Marvel movie and show for the full experience, Iron Fist may be one of Marvel's most skippable products yet.

While Daredevil and Luke Cage help set up the world of Marvel's New York City, filled with small-time villains and powerful crime rings, and Jessica Jones is just great, independent of its place in the Marvel mythology, Iron Fist only really serves to introduce a few new concepts to the Marvel Netflix Universe. It introduces Danny Rand, the titular Iron Fist, and reveals more about The Hand, the criminal organization introduced in Daredevil. But its main purpose is to introduce the world of mysticism and magic to Marvel's street-level heroes.

When comparing The Defenders to The Avengers, it's best to think of Iron Fist as a counterpart to the superhero Thor. In both cases, the other heroes introduced so far are super-powered but still close to reality. Iron Fist and Thor both blow the doors wide open and allow many of Marvel's weirder properties to become a little more believable. The alien invasion at the end of The Avengers would never have worked without Thor being present to introduce the concept of other planets and worlds. Similarly, The Defenders could have something major up its sleeve, and it might need Iron Fist's relationship to magic and mysticism to help bridge the gap from the more realistic worlds of Daredevil, Jessica Jones, and Luke Cage to the world of full-on fantasy.

Iron Fist may not work well as a standalone series compared to its Netflix brethren, but its existence opens up some big possibilities for the whole universe moving forward. The major concept that you need to take away from Iron Fist before hopping into The Defenders is pretty much, "Magic can happen in New York City because Danny Rand has a magical fist."

But even without the groundwork that Iron Fist lays down, if The Defenders is good then hypothetically fans wouldn't have had to watch any of Netflix's other Marvel shows. The Avengers worked not because they spent five movies laying the groundwork, but because it was a well-written film with clearly-defined characters. Anyone hopping into The Defenders should be able to get an idea of the characters from the show itself and will just have to risk missing out on a few Easter Eggs along the way.

If you have the time and interest, only you will be able to find out if watching Iron Fist will be worth it for you. However, if you're short on time and not able to spare yet another 13 hours for Netflix, The Defenders will still be watchable without having seen Iron Fist first.