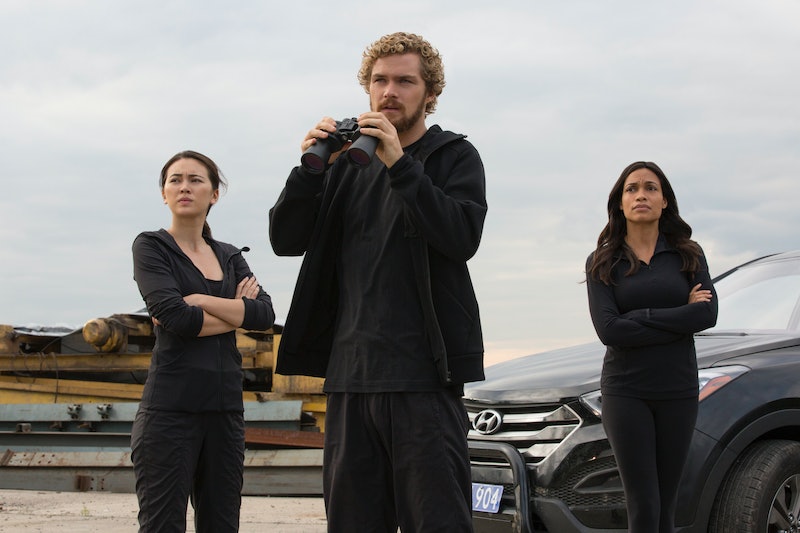 With the debut of Iron Fist and its fourth hero, Marvel fans know the drill with Netflix shows at this point. You know they're going to talk about "the Incident" and tease their dated comic book costume with some kind of ironic quip. The Iron Fist Marvel Easter eggs are all that and more, rewarding fans who have stuck through this street level saga. Naturally, there are major Iron Fist spoilers ahead. You have been warned, and are free to only scroll to the episodes you've seen.

As we've seen with Daredevil, Jessica Jones, and Luke Cage, Netflix Marvel shows have the tendency to keep the MCU Easter eggs close to the vest. For some reason, all of these New Yorkers, who have lived through multiple Avengers incidents and the revelation that Hydra has secretly infiltrated their government, won't call Iron Man, Thor, and the Hulk by their names. Iron Fist is largely the same way. It's going to be particularly disappointing when Spider-Man: Homecoming, a film that takes place just across the East River from these hard-working heroes with day jobs, doesn't acknowledge their existence at all. I can't see that happening, and it's a bummer.

However, the cool thing that Iron Fist is able to do with Easter eggs is set up The Defenders. It very much feels like the missing puzzle piece that's going to get us to this epic team-up series. There's also a hawk. Here are all the references to Marvel comics, Marvel films, and other Marvel shows on Netflix series that are kicking around Iron Fist.

As is so often the case with Netflix Marvel shows, the first episode focuses more on establishing the story of Iron Fist rather than the connection. The only nods are Colleen's dojo flyer, which itself was an Easter egg in Luke Cage, and Danny Rand's brief mention of K'un-Lun, the mystical city from Marvel comics where Danny was raised.

Then, in the second and third episode, things get started. For starters, Danny talks about being able to "summon the Iron Fist," and also mentions the Order of the Crane Mother. Paul Edmonds, who speaks to Danny at Birch Psychiatric Hospital, says, "I do know that ever since the Incident, I'm seeing a lot more people who honestly believe they have superpowers." Do they know about Inhumans in New York? Rand Industries might want to look in to the fish pill situation. Joy takes a client to the finest hospital in Hell's Kitchen, Metro-General, in Episode 3. Then, when Colleen Wing enters the fight club, she calls herself the Daughter of the Dragon, referencing the detective agency in the comics that Wing opens with Misty Knight.

More characters from other shows in the Defender universe appear in Episode 3, too. First, Carrie Ann Moss appears as much more sympathetic Jeri Horvath. Then, we learn that Harold Meachum is somehow being controlled by Madame Gao, the mysterious Daredevil villain. (If you didn't figure out that was her in the shadows, the end credits give her identity away.)

Ah, the return of the Hand, the secret organization from Daredevil. Comic book readers knew that they were connected to Iron Fist, and now it's playing out on screen. They have infiltrated the company. It's clearly more like Hand Industries at this point. The dragon-symbol branded heroin from Daredevil also resurfaces — and we get the first look at Danny's dragon chest tattoo. The dragon is named as Shou-Lao the Undying. Colleen also emulates her comic book character when she shows up to the fight club in her signature all-white attire and later picks up a katana.

Ward talks to a reporter from the New York Bulletin, who tells her editor, "Don't give the front page to Karen." Ha! Ward also accuses Danny of scaling the walls "like goddamned Daredevil," which was funny. It also appears that Harold was brought back to life using the same Hand technology that probably "saved" Elektra at the end of Daredevil Season 2.

For those of you joining me on "Claire Temple Watch 2k17," she finally appears in Episode 5 — hooray! The Daredevil, Jessica Jones, and Luke Cage character starts to weave everything together, and brings up the Hand ninja attack on Metro-General from Daredevil Season 2. "My mother says I can't escape meeting people like you," she groans. Danny also mentions sneaking out of the monastery with his friend Davos, known as Steel Serpent in the comics.

This is more of a fun fact than a Marvel Easter egg, but Radovan's "body guard" is played by Sala Baker, a stunt performer from New Zealand whose work has been featured in The Lord of the Rings, as well as Iron Man 3, Ant-Man, and Captain America: Civil War.

The RZA-directed episode takes a plunge into Marvel mythology. It marks the first appearance and mention of Lei-Kung the Thunderer, Danny's mentor who is played by Boon Lee. Danny's "test" to Radovan's daughter involves facing off with Marvel characters like Scythe, a mercenary, and the Bride of Nine Spiders. Gao also reveals that she knew Danny's father, and that there have been other Iron Fists — making him a new kind of hero in the Netflix universe. Luke, Matt, and Jessica are forging their own paths.

Meanwhile, Claire's old co-worker Shirley Benson makes a brief appearance. Someone mentions "The Incredible Green Guy," and Claire says "Sweet Christmas!" I'm more of a Claire/Matt and Luke/Jessica 'shipper myself, but that was a pretty cute reminder of Claire and Luke's relationship.

In Episode 7, Madame Gao says "I've been alive long enough to see the world change in many ways. This change seems significant. The Devil of Hell's Kitchen. The man with the unbreakable skin. And now an immortal weapon has left K'un-Lun not to fulfill his duty, but in derelict of it." Danny also name-drops Karen Page, and Harold mentions both Roxxon, the MCU's corporate dark shadow, and Midland Circle from Daredevil.

The low-key Marvel character Bakuto also arrives in Episode 7. In Episode 8, when the gang goes to China, the Easter Eggs are fun but subtle. It looks like Claire may have gotten a letter from Luke Cage in jail. She also mentions Matt without naming him, again. Even more fun — Joy Meachum once hired Jessica Jones to do some digging on her co-workers!

The Hand is a complicated organization in Marvel comics, and the Netflix universe is no different. While Bakuto teaches Danny how to use the Iron Fist for healing, he soon discovers that Colleen's mentor and family is the Hand. They're wearing red, like the Hand ninjas in the comics... and also Elektra. Are they the good Hand? Is there such thing as a good Hand?

Episode 10 is also where the mysterious man who showed up looking like another member of Danny's drum circle was, in fact, his pal Davos from K'un-Lun, played by Sacha Dhawan. Episode 11 shows the two of them together in training, just after Danny entered the cave, met the dragon, and became the Iron Fist. They talk about the Thunderer.

Bakuto does show Danny some footage of an older Iron Fist, who is wearing what looks like Danny's costume from the comics. Plus, Gao mentions Daredevil and Luke again — does she not know about Jessica Jones? Interesting. Claire also gives Danny one of Luke's bullet hole shirts, and one of Colleen's students named Becca Yoo works at Metro-General.

Also, when Colleen is captured by Bakuto in Episode 11, she is taken to the place where kids were being drained of blood in Daredevil Season 2 — just before Elektra was turned into a Black Sky.

For a show that's going to lead right into The Defenders, I was surprised at how the Easter Eggs died down at the end of the season. There's a Beyoncé reference in Episode 12, but not a lot of Marvel references. Hogarth was back, and gave legal advice to Colleen as well. Danny mentions Lei-Kung again. The Meachum hostage situation take up much of the penultimate episode.

When Danny and Colleen are hiking the Himalayas, he kind of looks like his dad in the comics. He also learns a new use for his powers in the showdown against Harold Meachum. The Iron Fist can repel bullets! Also in that scene, Harold talks about wanting to push Wendell Rand over a ledge, which is what happens in the comics. On Iron Fist, he gets rid of them by crashing their plane.

In the finale, Claire refers to her super-powered friends as "dark, haunted people." Danny may seem innocent, but he has demons that he's pushing down, too. I'm looking forward to seeing how all of these Easter eggs come to fruition in The Defenders. Danny Rand was only the final piece.