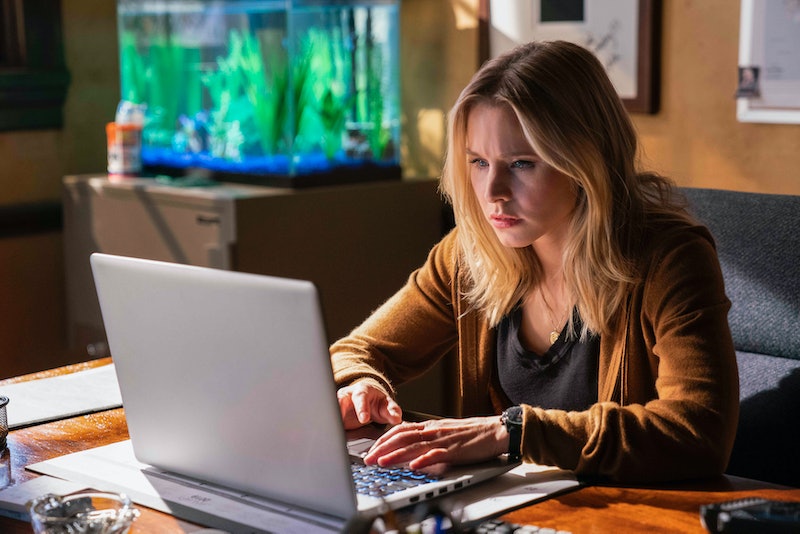 Spoilers ahead for Veronica Mars Season 4. Change is difficult for Veronica Mars, but a lot of time has passed between Season 3 and Season 4 of the cult noir series. Before diving into the new season, though, fans should watch the Veronica Mars movie. It's not a requirement, really, but it is a recommendation.

If you really want to watch the Veronica Mars film in advance of the fourth season, it is available to stream on HBO and rent in a variety of places. If you can't wait, no worries! There is enough exposition in Veronica Mars Season 4 to get you up to speed. The status quo at the beginning of Season 3 isn't that different from the end of Season 4 — it's just that a lot of time has passed. If you skip the film, or saw it years ago and forgot what happens. you won't be totally confused.

However, if you're looking for detailed answers to questions like "why is Veronica still in Neptune?," "when did she and Logan get together and since when is he in the Navy?," "why isn't Keith the sheriff?," and "what happened to Veronica's dog Backup?" you may want to check out the 2014 film and fill in those gaps. There are also a couple cameos from Veronica Mars characters that weren't in Season 4 — characters like Gia, Mac, and Piz.

In the film, without giving too much away, Veronica returns to Neptune to solve a murder and gets dragged to her ten year high school reunion in the process. Veronica had been living in New York City and working as a lawyer. The fact that she isn't using her law degree comes up a lot in Season 4, actually. It's one of the only key aspects of the movie that does.

The movie is honestly worth checking out simply because it is such a labor of love from the Veronica Mars cast and crew. Now, they have Hulu money, but back then they used Kickstarter to raise funds and interest for the feature. Just look at the video teaser (above) that they made. It's precious.

If you want even more context, there are also two Veronica Mars books that chronicle Veronica's return to private detective work in Neptune after the events of the movie and before the events of Season 4. There are also more answers about the whole Logan situation to be found in those pages. The first book, The Thousand Dollar Tan Line takes place during Spring Break season. The second, Mr. Kiss and Tell, is all about the Neptune Grand hotel.

The bottom line? Watch the Veronica Mars movie because it loves the Marshmallows right back... not necessarily because you need to for Season 4. The general consensus seems to be that the movie delivers more "fan service" than Season 4, so that that as you will. All in all, the epic story of Veronica Mars spans mediums and it's up to you as a fan to decide which you want to consume, and when.

More like this
Rupert Grint Just Shared A *Major* Update About Ron Weasley’s Future
By El Hunt
This 'Gossip Girl' Wardrobe Error Has Gone Viral On TikTok
By Alyssa Lapid
'The Last Of Us' Has Officially Been Renewed For Season 2
By Darshita Goyal
At 28, Rosie Perez Risked Her Career To Stop Playing Stereotypes
By Gabrielle Bondi
Get Even More From Bustle — Sign Up For The Newsletter
From hair trends to relationship advice, our daily newsletter has everything you need to sound like a person who’s on TikTok, even if you aren’t.