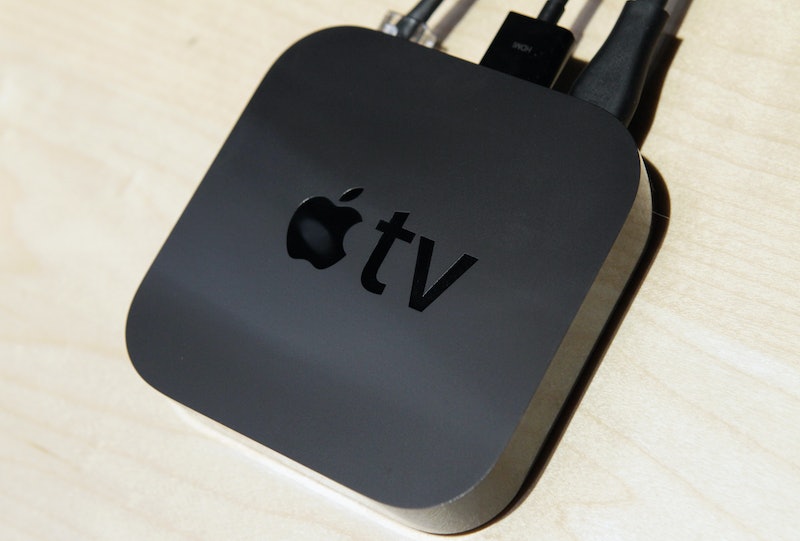 With all the streaming services already out there and even more coming, it can be hard to keep track of what each one offers and how they all work. On November 1, Apple's streaming service, Apple TV+, will be released, and while you might have heard about the new shows it will feature, you might be confused about whether you need Apple TV to stream Apple TV+ or not. That sounds like it would be the case given the name of the new service, but you don't actually need an Apple TV to use it, which is a good thing for some viewers.

First, let's start with what Apple TV even is, because it's not an actual Apple brand television set. Apple TV is a little box that you plug into your TV to essentially turn it into a "smart TV" that can access the internet. (You can also use Apple TV on a TV that is already "smart." By using Apple TV, all the streaming services or cable channels you have can be viewed from one Apple TV interface. (This is similar to using an internet connected Xbox, for example, to access other apps and services.)

Movies and series can also be rented or purchase on iTunes through Apple TV. Currently, Apple is selling a version called Apple TV 4K, which is focused on high definition viewing.

There is also the Apple TV app, and this is what comes into play with Apple TV+. The Apple TV app is what you see if you use Apple TV, but it can also be used on other devices. According to a May 2019 press release from Apple, the Apple TV app "brings together all the ways to watch TV into one app." With the app, users can access streaming services, sign up for on-demand channels (like HBO, Starz, and Showtime), and watch shows and movies with iTunes.

And, starting November 1, the Apple TV app will also be a way for Apple TV+ subscribers to stream Apple's original content. According to Apple, "If you have an iPhone, iPad, Mac, or Apple TV, you already have the Apple TV app — the ultimate way to watch Apple TV+." For these devices, you'll need the latest operating system. Apple TV+ will also be accessible with select Samsung smart TVs, and Apple plans to expand to other smart TVs and streaming boxes in the future. Apple TV+ can also be used by going to tv.apple.com in Safari, Chrome, or Firefox browsers. As of Oct. 15, the Apple TV app is also available on Roku devices, with others, like Firestick, reportedly to come.

As you can see, Apple has a lot going on with a lot of similarly named products and services that make this all very confusing. The bottom line is, you can subscribe to and access Apple TV+ without needing Apple TV, or any Apple product at all if you're cool with watching through a web browser. Apple just wants you to also want the little box thing that plugs into your TV.