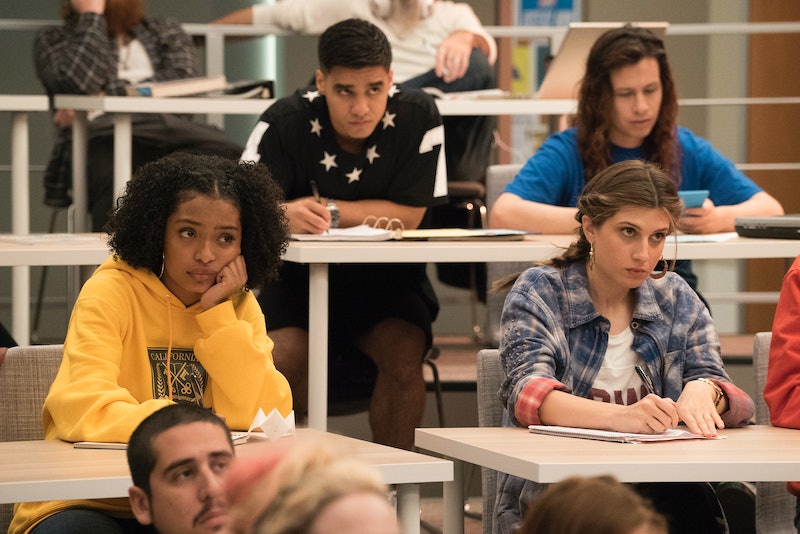 Zoey Johnson from black-ish can officially say goodbye to childhood and hello to the real world — well, the college "real world" that is. The eldest Johnson child from ABC’s hit comedy series black-ish makes her university debut on Jan. 3 in Freeform’s new series grown-ish. The spinoff, brought to life by the creator of black-ish, follows Zoey and her misadventures in young adulthood with the same witty satire and pop-culture references viewers love watching on its parent series. Which begs the question: do you need to watch black-ish before grown-ish?

Fortunately for those who don’t have time to catch up on four seasons of black-ish before grown-ish premieres, the answer is no. While knowing more about Zoey and her family certainly doesn’t hurt, the spinoff is a completely new entity. Meaning, no preexisting knowledge of the Johnson family or grown-ish's leading lady is required.

While Zoey still possesses some of the same confidence and charisma she exuded in black-ish, being thrust headfirst into new territory at California University takes her character to a whole different level. It also introduces her to all of the anxiety that can come with being "grown." Coming from a relatively privileged background in Sherman Oaks, university life will expose Zoey to things she never has before, according to star of grown-ish Yara Shahidi.

“Within the context of black-ish, she’s been very protected,” Shahidi told the New York Post about her character’s new development. “[In grown-ish] she has to reinvent the wheel she thought she knew so well. She goes from having run the social scene at her high school to an environment in which no one knows who she is, and she doesn’t have the same type of control of her surroundings. It begs the bigger question: Amidst all of these changes, who is she?”

Helping Zoey discover who exactly she is on the occasionally tumultuous journey of adulthood is a diverse group of new friends with their own equally unique storylines. Together they form their own version of the “breakfast club,” and hilariously struggle to evolve into the best versions of themselves between "woke" rants, Adderall stints, late-night hookups and more. While families may regularly watch black-ish together, grown-ish is targeted to and appropriate for teens and young adults.

In the same vain as black-ish, grown-ish will tackle issues central to college students and young adults today. To keep the stories as authentic as possible on the series creator and executive producer of grown-ish Kenya Barris told The Hollywood Reporter that the cast assists him and the writing staff. Additionally, Barris’ daughter — a USC freshman — and her friends do too.

"Because this is new and it's my baby, I'm super protective it. And I feel like the network has given me a lot of faith in getting this together,” Barris told The Hollywood Reporter. “I want to see it be a success. I want people to see what we see in this show. It's really important to me.”

But although Zoey will be completely on her own this go-round, her family isn’t too far away. According to Shahidi, there will be some crossovers between Zoey and the rest of the Johnson family throughout the season. Previews for the series have hinted that her father Dre (Anthony Anderson) makes an appearance in the first episode. “[While they’re separate] there is still a sense of interconnectedness between the two shows,” Shahidi told the Post.

In the two-episode series premiere Zoey will navigate some universal experiences familiar to college students: Making new friends, roommate drama, and the struggle of getting a hot classmate to notice you. So whether or not viewers are fans of black-ish, they'll totally understand the feeling of being grown-ish.