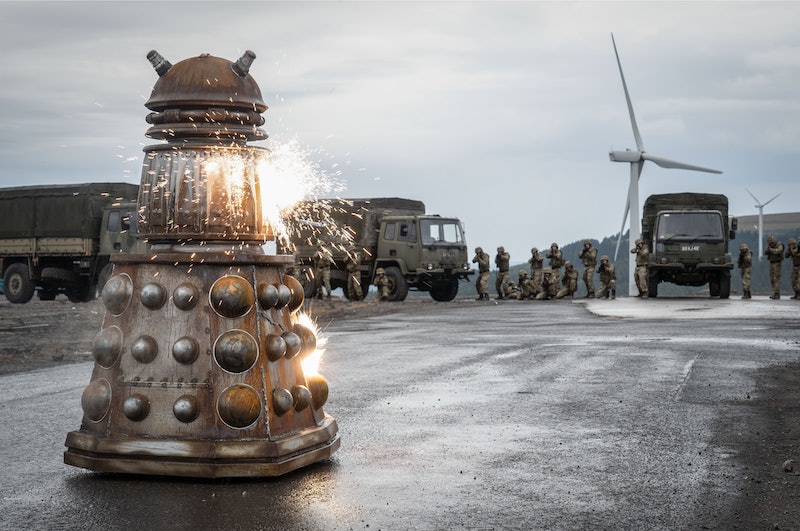 Doctor Who has reigned supreme on our screens since 1963 and has cemented itself as one of Britain's best-loved Saturday night shows. For the past 50 years there have been highs and lows to the show and fans have watched as some of the favourite regenerations of the Doctor have left (I miss you David Tennant), and the first female Doctor as Jodie Whittaker took over the coveted role last year. However it looks like there's been an extermination of one group of villains, as the Daleks won't be returning to Doctor Who.

Sadly the bad news doesn't end there because it isn't just the Daleks who won't be returning. The Cybermen and Weeping Angels won't be returning to the show either. I can't lie, although it's the end of an era for the Weeping Angels, I'm not too distraught because I remember being pretty scared of them when they first appeared on the screen (hiding behind pillows and everything), so it's good riddance as far as I'm concerned.

In an interview with The Telegraph, Chris Chibnall, Doctor Who's new show runner confirmed that these villains won't be featured because he's looking to do something new. "I want this to be a recruiting year for Doctor Who to bring in that next generation of audiences," he said. According to the publication, other characters set to face the chop this year are Missy, River Song, and Madame Vestra.

Although the Daleks aren't alone in being cut from the villain lineup, it does seem a little strange due to their popularity. Digital Spy reports that one of the reasons behind the decision to write the Daleks out was because they are the legal property of Terry Nation who created them. When Nation died in 1997 the ownership of the Daleks was passed on to his estate.

Although Nation's estate owns the concept of the Daleks, the image is owned by the BBC is the work of designer Raymond Cusick. This joint ownership has led to problems previously between Nation's estate and the BBC. Back in 2005, the BBC released a statement on the issue when it was announces that Doctor Who would be returning to screens. According to Digital Spy, it read: "after lengthy negotiations, the BBC and Terry Nation have been unable to reach an agreement on the terms of the use of the Daleks. The BBC offered the very best deal possible but ultimately we were not able to give the level of editorial influence that the Terry Nation estate wished to have."

It seems that Nation's estate weren't too pleased with the BBC's statement or the agreements presented to them, Digital Spy reports their rep said the estate was "bitterly disappointed" and they were looking to "protect the integrity" of the Daleks while the BBC were trying to "ruin the brand." Awkward.

If some Whovians took issue with there being a female Doctor (eye roll), I think I can safely this that this might cause a few issues for the Doctor Who community. All I'm saying, if if Britain's favourite cyborg aliens are being better I'm hoping for bigger, better villains that will find a place in our hearts. You'll be missed Daleks, may your "exterminate" live on forever.