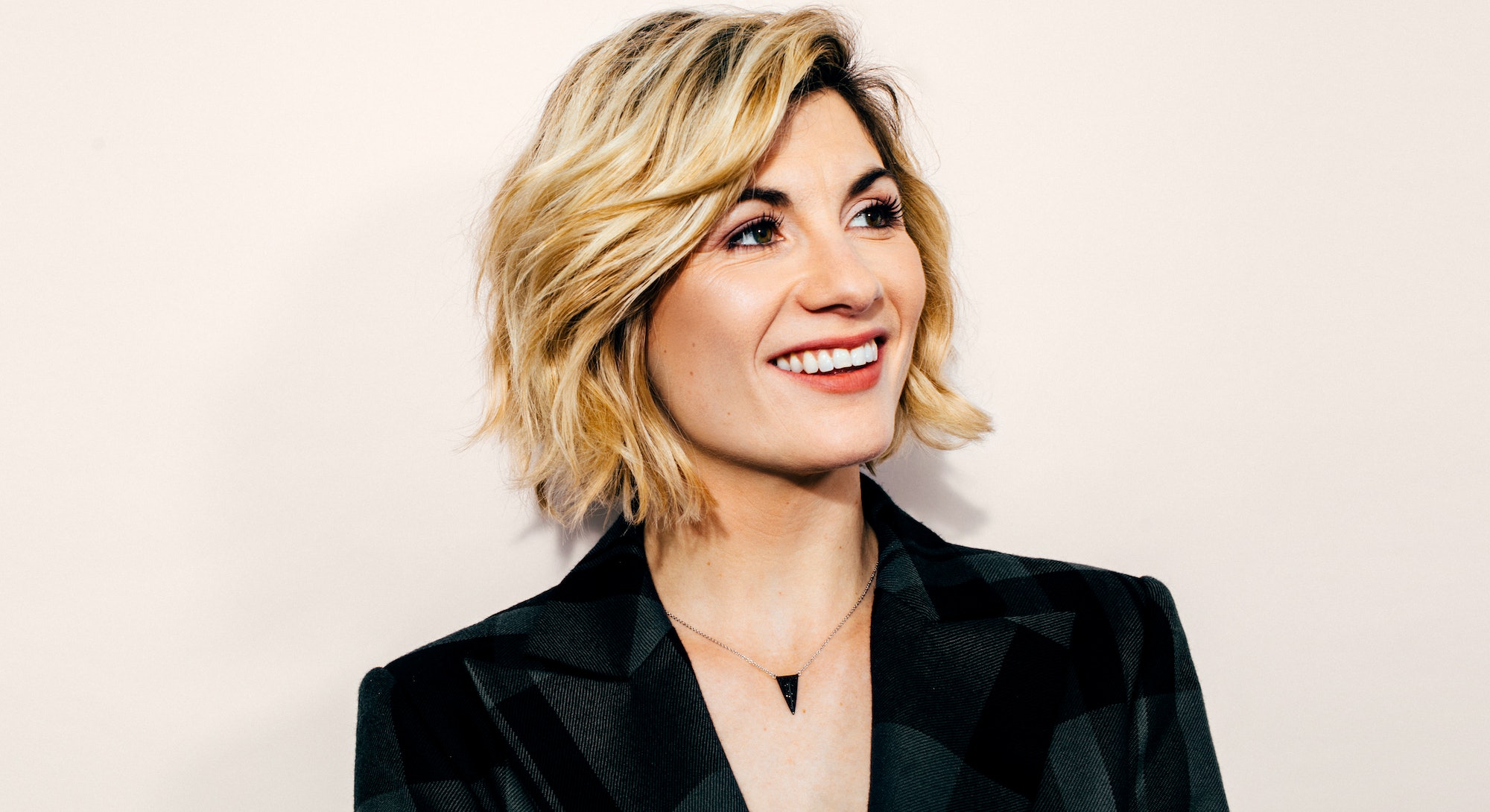 Let's get one thing out of the way: Jodie Whittaker is the first woman to take on the role of the Doctor in the British television staple Doctor Who, a pivot in the historically male casting that's 55 years in the making. But we don't talk about that much when the newly minted Time Lord visits Bustle HQ during her whirlwind NYC press tour. While it's an admittedly huge step for the franchise to finally hand the TARDIS over to a woman, there's so much more to celebrate and analyze about the new season (which kicked off Oct. 7 and airs every Sunday on BBC America) and its new star.

But if you're a little confused by the terms "Time Lord" and "TARDIS" or unsure how exactly to jump in to a series that aired its first episode back in 1963, know that Doctor Who's rich history is based on reinvention: the arrival of a new Doctor always starts a new chapter in the series, which makes for easier entry. The idea of presenting a fresh start was heartening to Whittaker, who was new to the fandom when she decided to throw her hat in for the part.

"I’m a new Whovian, and I’m new to this whole world," she says. Thankfully, being a die-hard fan is not a prerequisite for joining the cast. The show's eponymous character literally regenerates every few seasons, meaning each new version of the character — Whittaker is officially No. 13 — is unique in personality and appearance while retaining the same memories. "Doctor Who celebrates change and inclusivity and regeneration, and that has to be for all," she says. "It can’t just be for people that know it."

It's a little surprising that, unlike several past Doctor actors, Whittaker didn't grow up following the show and idolizing the time-traveling alien who picks up strays and shows them the universe. Because despite a schedule packed with appearances — including premiering her first episode in front of 5,000 people at New York Comic-Con — she's all friendly energy and excitement on this Friday morning, much like her incarnation of the character. And, also like the Doctor, Whittaker immediately makes herself at home. The first thing she does when she steps into our studio is make a beeline to the computer's Spotify to pull up some music for the shoot (it's electronic artist Pete Tong, whom she raves about between the photographer's flashes).

I think to limit it to a sci-fi genre in its label does it a disservice because it’s its own genre, in a way.

Considering the worldwide reach of the show and its long legacy, a lot is asked of the person playing the Doctor beyond simply showing up to set and delivering lines. As the face of the series, the actor is taking on the duty of being an ambassador for the show, and Whittaker is clearly embracing every aspect of that. Plus, being open to new experiences is perhaps the most dominant characteristic of the time-traveler. It's partly why Whittaker was thrilled by the show's established universe once she started to dive in.

"The Doctor, particularly the way [new showrunner Chris Chibnall] has written, is so full of hope and has that amazing ability to continually learn even with this extraordinary hindsight," she says. "And that’s a life lesson, to never feel like you know the answer. And I think as adults we can often prejudge a scenario... [we're] sometimes closed off to the openness of what could happen, and I think that’s the opposite of the Doctor. That’s an extraordinary thing to play."

She talks a lot about the freedom of this role, which gives her a break from depicting some of the most achingly human faults and anxieties. The Doctor isn't concerned with what anyone thinks about her, for one, though she's pretty much always the strangest being in the room. She isn't weighed down by inhibitions.

"Not everyone — there are some lucky people out there that continue well into their 80s without being self-conscious," Whittaker concedes. "But there’s a part of you that doesn’t necessarily always want to stand out. But the thing with the Doctor is that they’re not trying to!"

They do anyway — each and every one, including Whittaker's. And while that childlike lack of restraint could be seen as a sign of naivety in the real world, the actor assesses that it's actually "quite brave."

There's more to the ongoing narrative of the show than the traits passed down from Doctor to Doctor, however. Doctor Who is serialized; there are storylines that carry through, and the Doctor has experienced several lifetimes worth of loss. But it also essentially reboots every few years, and the Doctor herself is all about forward motion and her breadth of experience.

To demonstrate what that means, Whittaker brings up another of her most famous roles as a contrast: her devastatingly grounded portrayal of grieving mother Beth Latimer in the crime drama Broadchurch (the project on which she first worked with Chibnall.) For that person, the event of her child's death "dictates everything," she explains. "Well, that isn’t the case for a character like the Doctor."

In this part, she's not beholden to playing one set of circumstances, which is a playground for an actor, according to Whittaker. Its message of connection and exploration also makes the show accessible for newcomers, even those who wouldn't necessarily call themselves science fiction fans.

"You’re playing an alien, you are not restricted to social etiquette or time periods or anything like that. You are a traveler who is there to experience and has this extraordinary way of viewing worlds and life and time and science and space and everything," Whittaker says. "And I think to limit [the show] to a sci-fi genre in its label does it a disservice because it’s its own genre, in a way. And yeah, it’s beautiful."

The structure of Doctor Who is such that audiences also have the ability to see all of the things that Whittaker mentions through the eyes of the Doctor's companions — or, as this new season dubs them, her friends. The first episode of the season introduces Graham (Bradley Walsh), Yaz (Mandip Gill), and Ryan (Tosin Cole), the humans whose lives the Doctor interrupts and forever changes. And the story takes its sweet time establishing their lives and relationships to one another. Almost 10 minutes go by before the Doctor even shows up. ("Can you imagine when I was reading it? Am I in it?" Whittaker laughs, miming flipping script pages. "First female, they cut me out of it!")

Everything about me gets goosebumps, I’ve seen it two or three times now... It is, it is... epic.

The size and variety of this TARDIS Team presents even more points of entry for newcomers, Whittaker explains. "This is potentially the first Doctor Who episode you’ve ever seen, or you are a die-hard fan and you are getting to know new people," she says. "So [we] give them the space to explore, to develop, to understand the world they’re in, which is a very normal, domestic environment, until this alien literally crash lands into it. So with that, I think you’re so invested by the end of the episode, because you’ve got to know them and fall for them."

Whittaker certainly seems to have fallen for her co-stars. "Brad is exhausting," she sums up, grinning. "Tosin is horizontally laid back. Mandip has funny bones in every single part of her body, and it’s such a wonderful combination." The Doctor is sometimes described as a "lonely god," hence all the tagalongs, and it seems that the star prefers having her friends with her as well. "I’m sad, I keep moaning about it!" she says about handling the press tour without them, smiling over her shoulder at the BBC America publicity team.

But that doesn't mean Whittaker isn't enjoying being the one chosen to embody one of the most iconic roles in media. Her eyes light up when she describes the most impactful scene in the premiere for her — the moment when the Doctor finally arrives.

"Everything about me gets goosebumps, I’ve seen it two or three times now," she says. "[It's] the fact that they put the score of the soundtrack at that one moment, for about four seconds. It is, it is... epic. And as that person, you just... you realize. I’ve known all along the responsibility and the honor and all those things and what it is you’re a part of, but when you see your face in the episode and you’re given that moment to enjoy this forever recognizable piece of score, you know, I think that’s my favorite bit of the whole thing."

And it's all full-speed from there. The rest of the episode sees Whittaker checking off a laundry list of the character's signature behaviors, including (but not limited to): talking really fast; breaking stuff; running; staring down a scary alien; bringing out the best in her companions; threatening said scary alien; and picking out an ensemble that certainly wouldn't get lost in a crowd. Whittaker would also like you to know, thank you very much, that she did her own stunt work when the Doctor leapt from one crane arm to another. "I just had to do it for myself, because I just had to," Whittaker says, adding how grateful she is to the stunts team for letting an "overenthusiastic kid" like her get in on the action.

And audiences are demonstrably more excited for the show than they've been for a long time, much to the dismay of the haters projecting that "PC culture" would be the downfall of Doctor Who. According to a BBC America press release, last Sunday's premiere drew 48 percent more viewers than the previous season premiere, and also beat out the debuts of David Tennant and Matt Smith, the popular 10th and 11th Doctors, respectively. Whittaker was thrilled to see fans of all ages and genders already cosplaying her Doctor at San Diego Comic-Con, long before the episodes even aired. The NYCC crowd greeted her with a standing ovation on premiere day. And being on that level with the ever-growing fandom is no impermanent thing.

"I suppose it seems like such a long time off, that sense of not doing it," she says when I ask if she'll stick around in the Whoniverse after her run is finished. "But the thing that was so brilliant about getting the part, and something I know because I know [David Tennant], is that once you’re in the family, you’re never out ... I can be 80 years old and referred to as 'the Doctor' by somebody, and to know that you’re always welcome in that world is extraordinary."

So don't be intimidated by the years of history or the ardent, educated fanbase. Jodie Whittaker quickly learned — and added to — what's special about Doctor Who. You can, too.

Hair and Makeup By Jeni Chua