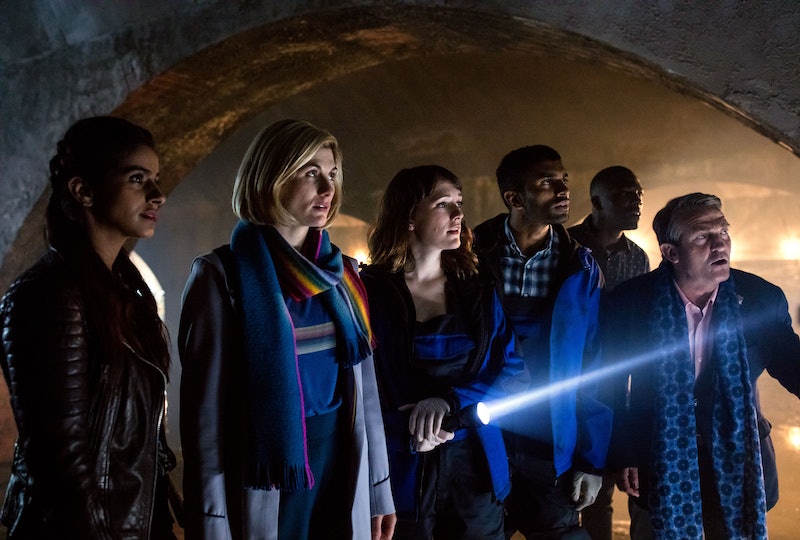 The latest series of Doctor Who has only just concluded, but anticipation is already mounting for the show's New Year's Day special — the first festive special not to air on Christmas Day. To date, details about the episode have been sparse, though one huge rumour continues to circulate: Doctor Who's New Year special might feature the Daleks. Could it be true that the Time Lord's famous foe is the "most dangerous creature in the universe" mentioned in the trailer? Here's everything we know so far.

The BBC released a synopsis for the episode back in November, stating, "As the New Year begins, a terrifying evil is stirring from across the centuries of Earth’s history. As the Doctor, Ryan, Graham, and Yaz return home, will they be able to overcome the threat to planet Earth?" Alongside Jodie Whittaker, Tosin Cole, Bradley Walsh, and Mandip Gill as the newly established Tardis team, the episode will star guest actors Nikesh Patel, Charlotte Ritchie, and Daniel Adegboyega as Mitch, Lin, and Aaron, as the Radio Times reports.

And according to the Mirror? The "terrifying evil" mentioned in the synopsis is the Daleks. In December, the paper reported that the Daleks would indeed make an appearance in the New Year's Day episode, complete with a shiny new makeover. No more "bronze look," apparently. The BBC declined to comment on the Mirror report, and have yet to respond to a request for comment on this article.

Cultbox went on to share some fan photos purportedly showing the special being filmed — and one fan snapped a photo of a logo on a prop sign that looks distinctly Dalek-adjacent. As Cultbox points out, however, that would require quite a redesign of the legendary antagonists. Which could support the Mirror's claim — or could suggest the logo depicts something else altogether.

So what does the Doctor Who showrunner, Chris Chibnall, have to say about the rumours? Well, he told the Radio Times before the launch of series 11, "There are no old monsters this series, OK?" That certainly proved to be true over the run of the season, with new monsters like the Stenza taking centre stage.

But, as the magazine points out, Chibnall discussed the New Year's special at San Diego Comic-Con before it was confirmed, saying, "I would definitely think there’s another episode after the end of the series, yeah." That makes it pretty clear that the New Year's special doesn't belong to series 11, but is a standalone episode — meaning his aforementioned denial that any "old monsters" would appear doesn't apply.

Chibnall was subsequently asked directly whether the Daleks would appear, and tellingly, he didn't flat out deny it. "We’ve got two weeks left of shooting, and we haven’t seen them yet," he said, according to the Radio Times — which sounds an awful lot like he's dodging the question to me. What do you think: are you anticipating an "Exterminate!" or two on New Year's Day? Consider my prediction a firm "yes."