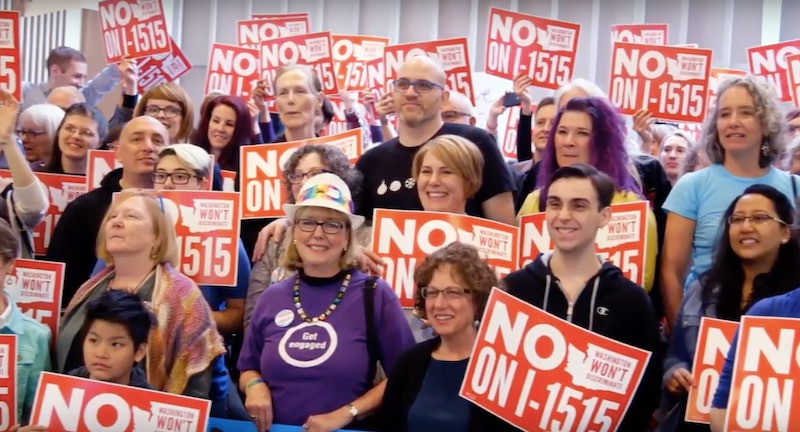 A little girl is standing on a porch in a pink sundress. Her straw-colored hair is tied up in pigtails, the flaxen curls bound together with bright purple bands. The girl’s mother asks her what she wants to be when she grows up, and she has a list prepared for just such an occasion. “I want to be a singer, an artist, a photographer, a fashion designer, and someone that works in a restaurant,” the girl says. “So I’m going to be really busy.” Her wish list marks the first moments of The Most Dangerous Year, a documentary which premiered at the Seattle International Film Festival in 2018 ahead of a limited run in cities like New York, on April 12, and Los Angeles, on April 26.

Directed by filmmaker Vlada Knowlton (Having It All), the film profiles transgender children who, in 2016, found themselves facing new proposed legislation that would limit their freedoms. Republican lawmakers in Washington State fought to pass a bill — SB 6443 — that would force transgender individuals to use restrooms and locker rooms that do not align with their gender identity in schools and public places.

I was in a unique situation because I was a filmmaker already and I was connected with this community. Our whole family would be directly affected by this. I felt I had an obligation to do something.”

The Most Dangerous Year is among the first films to provide an in-depth look at this generation of young transgender people, motivated into activism in order to protect their right to be themselves. However, the documentary is also an unofficial home movie: Its opening scene was filmed in Knowlton’s backyard. The five-year-old girl is her daughter.

After months of demanding to wear dresses, Annabelle told her parents that she didn’t want to be a boy when she was four years old. During a car ride to school, amid a conversation about where babies come from, Annabelle said she wanted to be “put back in” her mother’s belly.

Knowlton tells Bustle that it had never occurred to her to make a movie about her daughter until the beginning of 2016, a year after Annabelle told her parents who she is. Aidan Key, a local activist and director of the community organization Gender Diversity, approached her about the unprecedented wave of legislation targeting transgender people across the country. According to the Human Rights Campaign, 55 anti-trans bills were introduced in 2016. Sixteen were directed at children like Annabelle.

“After she was already living happily as her true self, we thought the worst was over,” Knowlton says ahead of the movie's theatrical release. “But then Aiden calls me out of the blue because he was concerned about what was about to happen. I was in a unique situation because I was a filmmaker already and I was connected with this community. Our whole family would be directly affected by this. I felt I had an obligation to do something.”

Like the majority of anti-trans bills put forward during the “dangerous year” that inspired the film’s title, SB 6443 was ultimately unsuccessful. According to the Seattle Times, the legislation was defeated in the Washington State Senate in February 2016 by just one vote: 25 to 24.

Meghan Hebert-Trainer, another parent interviewed by Knowlton in the documentary, remembers 2016 as a “scary” time for families like hers. Hebert-Trainer tells Bustle that, when her daughter, Briana, came out to her at six years old, family and friends were “100 percent supportive” of her transition. Her family was terrified that with a law like SB 6643 on the books, the welcoming community they had built in Western Washington could change overnight. The area is home to some of the country’s most liberal cities: Seattle and Olympia.

“How do I explain to my sweet little girl when I tuck her in at night that she can’t use the girls’ bathroom because the people who make our laws think there’s something wrong with her, something scary, threatening, and deviant about her?”

“We didn't lose grandparents, aunts, uncles, or friends — nobody walked away from us,” she says. “We were in a bubble. If the bill passed in Washington, it could happen anywhere. It felt so hopeless.”

Though the obstacles felt insurmountable, Hebert-Trainer says her family was determined to do what they could to make the world a “safer place for our daughter and other trans people.” In one of the film’s most emotional scenes, her husband, Ryan, pleads with lawmakers not to legalize discrimination against children.

“How do I explain to my sweet little girl when I tuck her in at night that she can’t use the girls’ bathroom because the people who make our laws think there’s something wrong with her, something scary, threatening, and deviant about her?” he asks the Senate Commerce and Labor Committee. “This is our child. Like everyone here, we’re doing our best to love her, to support her, and to keep her safe. She is deserving of respect and protection just like all other children in Washington state. Please don’t take this away from her.”

One of the reasons Key was adamant that The Most Dangerous Year be made is that he feels many previous depictions of transgender lives haven’t captured the bigotry transgender people and their loved ones face just to exist.

In a phone conversation with Bustle, Key recalls tuning into a news special about a “sad trans teenage girl” maybe a decade or so ago. He doesn’t remember what year the program aired or even who the interviewer was, but the sick feeling in his stomach as he watched it has stuck with him ever since. The girl was in pain and her parents were in pain because of the tremendous rejection she faced in her own community, but, in his memory, the special presented misery as if it were an inherent condition of being transgender.

“If you're sitting there watching that show, you’re watching a very depressed transgender child and you think, ‘Why support this?’” he claims. “There's no recognition of the part that other people play — the part that schools play, that medical professionals play, and the part that society plays.”

According to Knowlton, the hardest part of making the film was confronting the hate that transgender youth in Washington face, head on. During the SB 6443 fight, concerned mothers tell Knowlton that trans rights will lead to men dressing up as women and assaulting people in public bathrooms. “We need to protect our children!” warns a middle-aged woman in a purple blazer and pageboy haircut in the film.

When Knowlton asks those opposed to protections for her daughter if they know someone who has been targeted by someone pretending to be transgender, each of them quickly demur. “Not in a public facility at this point in time,” one responds. Another says, “I can’t say that I know anybody specifically that has had that happen to them.”

Knowlton says her goal during these conversations wasn’t to take these women down. She just wanted to listen and give them a chance to voice their side of the debate.

“It was difficult, but it was something that I thought was absolutely necessary,” Knowlton explains. “I believe that it's important to treat your audience with respect and assume they're intelligent enough to see through any arguments that fail and don't stand up to scrutiny.”

Refreshingly, no one is a monster in The Most Dangerous Year — not the conservatives in highlighter-pink scarves sitting in the background as Ryan Trainer begs for his daughter’s dignity or even the suburban mom who dismisses transgender kids as “confused.” Everyone is human, and for transgender children who are either portrayed as tragic victims or threats to public safety, asserting humanity is a revolutionary act.

Of all the groundbreaking aspects of the documentary, perhaps the most profound is that Knowlton shows transgender children and their families living in the most mundane, everyday way. Huddle Blakefield, the mother of a young transgender son, tells Knowlton her son was “suicidal” until his parents learned to listen when he spoke up about his gender identity. After a year of seeing doctors who told her to ignore the issue, Blakefield recalls thinking: “He’s not the one having the problem. I’m having the problem hearing it.” As she thinks back on their family’s journey to acceptance, her son plays video games with the other kids.

While the film ends on a note of revelry — as trans kids, their families, and local activists celebrate the defeat of SB 6443 — the final moments are quieter and more resonant. Annabelle is sitting at her desk coloring a white cardboard sign. The display will eventually read “Proud of Myself,” and she will later wave it at a rally. But for now, Annabelle is enjoying her hard-won right to be a five-year-old girl who dreams of being an artist someday (among many other things).

Knowlton hopes that image that sticks with viewers.

“It's extremely valuable for people to see this experience that families have to go through when they’re fighting against laws that attempt to take away their children's futures and their children’s rights as human beings,” she claims. “These are people who are no different from anyone else. They want the same exact things that all other human beings want — to live a safe, happy life.”