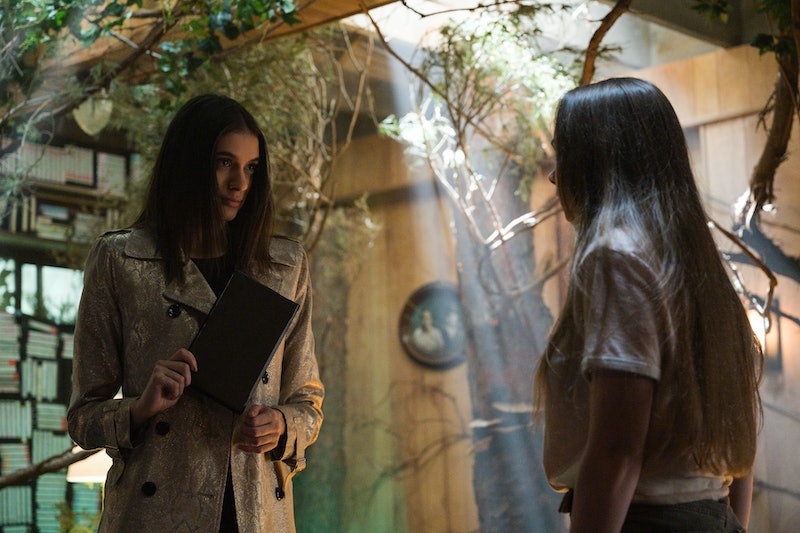 Every horror story needs a good villain, and in Netflix's Locke & Key, that's Dodge. Played by Laysla De Oliveira, the character is one of the more formidable supernatural forces residing in Keyhouse, where the Locke children have recently moved with their mom after their father was murdered. Though initially friendly to Bode, the youngest, Dodge, quickly becomes the show's main antagonist — which, if you read the comics, you would have easily predicted.

Much like on the show, the comics' version of Dodge is initially trapped inside a well located on the Keyhouse grounds. You might think this would put the character at somewhat of a disadvantage, but Dodge has the ability to possess people and assume their identities, which is how the demon-like being manages to control and manipulate others into do its bidding. That bidding includes finding the Omega Key, which has the power to open a dangerous gateway into another world.

In the comics, Dodge takes possession of numerous people, including Lucas Caravaggio, the best friend of the Lockes' father Rendell, Zack Wells, and even Bode Locke. Dodge changes appearance by using the Identity Key, but usually prefers using a female form, believing it offers an advantage.

This is likely a big part of why Rendell never discussed Keyhouse with the rest of his family. Having seen the harm Dodge could inflict when he was himself a kid, he knew the danger they all could be put in if they were open that door again (both figuratively and literally speaking). Dodge will kill anyone who gets in the way in order to retrieve the Omega Key, which is how Rendell ends up dying in the first place. Believing Rendell knew the location of the Omega and Anywhere Keys — which would allow Dodge's spirit to be freed from the well — Dodge influenced a young, vulnerable boy named Sam to track him down. When Rendell refused to cooperate, Sam killed him. Let's just hope that the rest of his family won't share the same fate in the Netflix series.

More like this
'Bridgerton' S3 Teases Exciting Social Season For Penelope Featherington
By Bustle
Olivia Colman Is Supporting Her On-Screen Son Kit Connor In The Sweetest Way
By Catharina Cheung and Darshita Goyal
17 Photos Of The 'Wednesday' Cast Vs. The 1991 'Addams Family' Cast
By Grace Wehniainen
The 'Firefly Lane' Book Ending Teases Way More Tears To Come In 2023
By K.W. Colyard
Get Even More From Bustle — Sign Up For The Newsletter