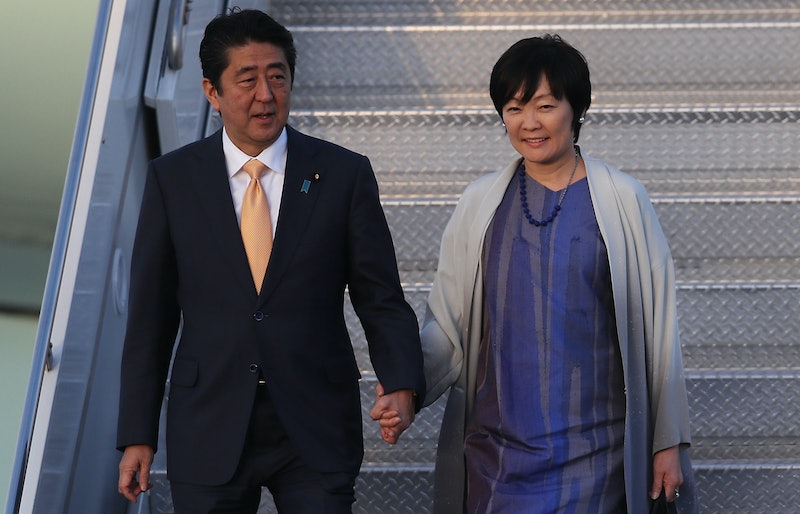 During President Donald Trump's expansive and at-times controversial recent interview with The New York Times ― in which he said he wouldn't have picked Jeff Sessions for attorney general if he'd known he would recuse himself from the Russia investigation, and lobbed some implied threats in the direction of independent counsel Robert Mueller ― a small detail about the wife of Japanese Prime Minister Shinzo Abe has raised some curious questions. Namely, does Akie Abe speak English? Or, did she give Trump the cold shoulder during the couple's official visit to the United States?

The answer, according to Amy B. Wang and David Nakamura of The Washington Post, is likely slightly more nuanced than many people are suggesting. While it's true that Abe has spoken English in public in the past, with the most notable recent example being a speech on coastal resilience at the Ford Foundation in 2014, she was operating off of a script, and her level of fluency or confidence in the language is not clear.

As such, Wang and Nakamura's reporting suggests Abe likely declined to speak English directly to Trump as a means to avoid misspeaking ― rather than some of the popular theories floating around social media, that she pretended not to speak English to flat-out snub him.

Indeed, the report notes that she's previously relied on interpreters when she's visited the United States, making the idea that she cagily schemed a way to avoid talking to Trump sound more like anti-Trump fiction than reality.

On the other hand, Trump himself told Maggie Haberman of The New York Times that the 55-year-old first lady of Japan spoke no English, not even the word "hello," and that's obviously untrue. Someone who didn't have at least that level of proficiency wouldn't be able to navigate any kind of speech in English, whether reading from a script or not.

As such, it's probably fair to conclude that Trump was in the dark about how well she could've communicated if push came to shove. According to Trump, she didn't say anything directly to him for the duration of their dinner together, which lasted (by his recollection) about an hour and 45 minutes.

So, the final verdict? Based on credible reports, and that 2014 video, Trump is quite plainly wrong in his assessment of Abe's English skills ― she can definitely say "hello," and indeed, a whole lot more.

That said, given her past reliance on interpreters, and the fact that state visits are major political and diplomatic affairs, it's not hard to see why she would want to avoid a direct conversation with the president in a language she may not be fluent in. And none of that requires the assumption she was avoiding talking to him out of personal dislike, which has been the clear implication of a lot of the speculation.