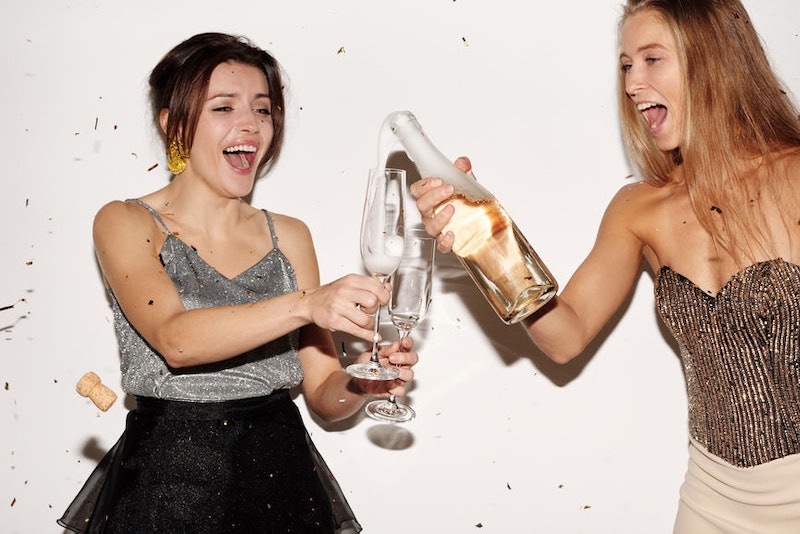 There's a strong chance you consume more alcohol in December than any other month, whether that's courtesy of the office holiday party, your New Year's Eve celebrations, or the glass or two necessary to revive you after battling hordes of Christmas shoppers. What you also might have noticed is an increase in migraines, if you're prone to the severe form of headache. So does alcohol cause migraines? According to a new study, a significant amount of migraine patients think it does.

Migraines, the NHS explains, are typically experienced as a "throbbing pain on one side of the head," while accompanying symptoms can include increased sensitivity to light or sound, nausea, and vomiting. They're particularly common in women: about one in five women experience them, compared to one in 15 men.

Researchers from the Leiden University Medical Center, in the Netherlands, conducted a study of 2197 migraine patients to determine how many reported alcohol as a trigger. The participants completed an online questionnaire on their alcohol consumption, the time between drinking and experiencing a migraine, their perception of alcohol as a trigger, and, where relevant, their motivation for avoiding alcohol.

The findings? Over a third (35.6 per cent) said drinking alcohol could result in a migraine, while a further 77.8 per cent of those cited wine — red in particular — as the biggest culprit. Only 8.8 per cent of the total participants consistently experienced a migraine after drinking red wine, however.

The perceived association between alcohol and migraines had a notable impact on the consumption habits of the participants, too — as anyone who's ever suffered the misery of a migraine will understand. Of the patients who avoided alcohol, over a quarter did so because they considered it a trigger.

"Our results illustrate that alcoholic beverages are frequently recognized as migraine trigger factors and have a substantial effect on alcohol consumption behaviour," the study authors said. They added, "It can be debated if alcohol is a factual or a presumed trigger," noting that drinking alone had relatively inconsistent rates of causing a migraine.

The study indicates that people commonly perceive alcohol to be a migraine trigger — but have researchers concluded whether it actually is? According to the NHS, a specific cause of migraines has yet to be determined, though they're believed to occur when "abnormal brain activity temporarily affect[s] nerve signals, chemicals and blood vessels in the brain." The exact cause of that abnormal brain activity remains unclear.

The NHS does note, however, that a range of factors could trigger a migraine, whether physical, emotional, environmental, dietary, or medicinal — so yes, that includes alcohol consumption. Other potential triggers include the hormonal changes around your period, high levels of stress or anxiety, poor sleep or jet lag, dehydration, and medication including the combined contraceptive pill.

Keeping a diary, the NHS suggests, might help you to isolate and potentially avoid your individual triggers. And if you do notice a connection between drinking alcohol and experiencing a migraine? Might be worth sidestepping the holiday Baileys.