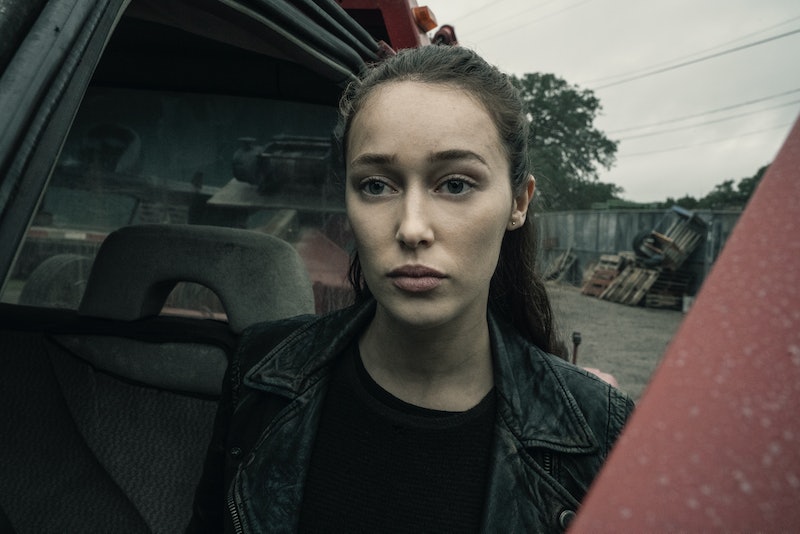 As soon as Fear The Walking Dead introduced radioactive zombies in the first part of Season 5, fans knew it wasn't going to end well. And after she spilled nuclear blood on herself in the July 14 episode, it looks like Alicia is going to die Fear The Walking Dead. Although there might be a little bit of hope.

It all started when Alicia stumbled upon Annie and the other kids' Peter Pan-like hideaway. While it is ultimately better and safer for them that they board the plane with Morgan and that group... it was a pretty cool tree house situation. What kid wouldn't want to stay there during a zombie apocalypse?! Unfortunately, while protecting the kids from an oncoming hoard, Alicia accidentally killed one of those nuclear waste-ridden walkers and got blood all over her. She's also trapped, somehow, by the hoard.

The logistics are a little hard to follow if you're not paying close attention, but go with it. She's stuck, the kids are safe, and while she was able to find a stream and wash the infected blood off of her, it may be too late. Only those in hazmat suits can safely kill these particular zombies. Alicia has been exposed in a major way — and even if she doesn't die immediately she may have to stay behind.

Plus, the plant could still melt down at any minute. Grace was able to delay it long enough for everyone to get out of there, but hope is running out for the survivors in Texas.

Just focus on that theory that Alicia's voice was on Jadis' radio when Rick Grimes was taken away on The Walking Dead. If that's true, and that crossover hasn't happened yet, then we know she survived. If Alicia dies on Fear The Walking Dead, that means that pretty much every character who started in Season 1 is now gone. Strand was introduced at the end of the first season, and even Luciana wasn't introduced until Season 2.

There's really just Alicia and Daniel Salazar. The latter, of course, has more lives than his cat Skidmark... but he's not interested in being a part of the larger group at the moment.

Alicia has lost so much. Every member of her family has died. She finally found a reason to live with Morgan and this group of survivors, and started to get good at leading rather than just killing. Vanity Fair referred to Alicia as the anchor of Fear The Walking Dead — and they're right! She was sneakily "the Rick Grimes" of the spin-off series, not her mother Madison. This really has been Alicia's story all along. So it can't be over, right?

Fingers crossed that she finds a way to either decontaminate herself, or keep on living for a while longer. Grace seems willing to leave with Morgan even though she has been exposed, and developed a lethal radiation sickness. Maybe, at the very least, Alicia doesn't have to die alone. The nuclear plant, and the extra-dangerous zombies leaking out of it, is very very serious. It has to have real consequences in the story, and this could be how Alicia dies, even if it doesn't happen immediately.

More like this
This 'Gossip Girl' Wardrobe Error Has Gone Viral On TikTok
By Alyssa Lapid
'The Last Of Us' Has Officially Been Renewed For Season 2
By Darshita Goyal
A New 'And Just Like That' Table Read Pic Confirms A Key Character's Return
By Jack Irvin and Grace Wehniainen
At 28, Rosie Perez Risked Her Career To Stop Playing Stereotypes
By Gabrielle Bondi
Get Even More From Bustle — Sign Up For The Newsletter
From hair trends to relationship advice, our daily newsletter has everything you need to sound like a person who’s on TikTok, even if you aren’t.