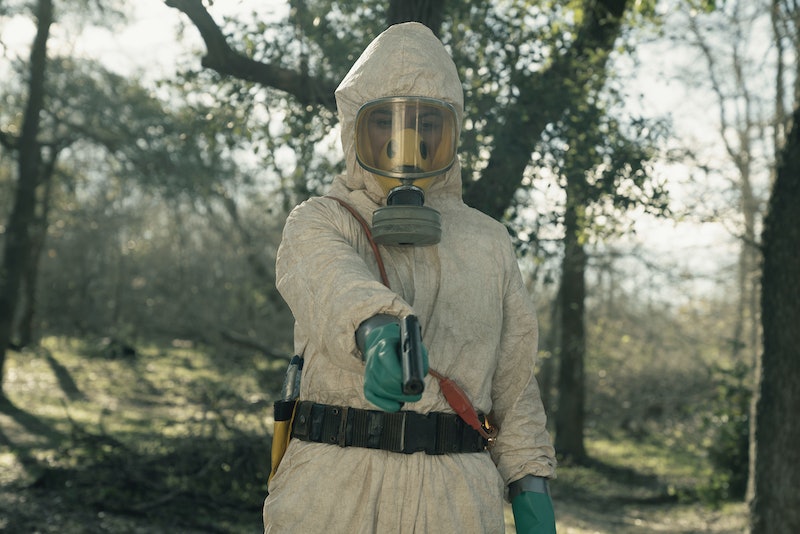 Morgan and Alicia separated from Luciana, John, and June to go look for Al, who was kidnapped at the end of the Season 5 premiere. It's on that search that they encounter Grace. She's played by Karen David, who you may remember from shows like Once Upon A Time and Galavant. Grace tells Morgan that he and his walking/fighting stick have been contaminated... but with what?

Grace is holding down the fort in a truck near a former nuclear plant that melted down after the outbreak. She's carrying a tremendous amount of guilt as the (seemingly) soul survivor of the accident, and has been spending her days trying to contain and dispose of her former coworkers. It's a depressing and dangerous job, but somebody has to do it. "I couldn't take care of them then," she says. "So I take care of them now." Those that died there are marked, and have to be destroyed carefully so that they don't contaminate any of the living.

So that's fun. If the Fear heroes don't get murdered by zombies or humans, they could get radiation poisoning. At least Grace has a nice outdoor shower. Towards the middle of the episode, Grace reveals that she has 63 dead former coworkers unaccounted for — and that number has surely decreased since then. What will she do when her mission is complete? She's alone — and dying, slowly, from her own exposure to radiation.

At least she's probably a good guy, relatively speaking in the morally gray Walking Dead universe. While Grace, like the people who kidnapped Althea, is wearing a mask, she wasn't involved. Which of the remaining, and unseen, scary people did that? They had very different masked suits, not like the kind one would normally find at a nuclear power plant, but they may be aware that the area is contaminated.

They actually might be related to the Commonwealth from The Walking Dead comics. Those soldiers wear masked helmets. Plus, did you catch the potential connection between who took Al on Fear and who took Rick Grimes in the original series?

Since Grace is a series regular now, this isn't the end of her story on Fear The Walking Dead. That's good for the show, as she has some survival skills unlike any that the group has encountered before, as well as for the character. Grace shouldn't have to deal with her guilt alone. There has to be a way for the others to help her, even if she's ultimately doomed. Morgan and Alicia knew that searching for people who needed their help would be hard work, but not hopeless. They'll find their way back to Grace, and be better off for it.